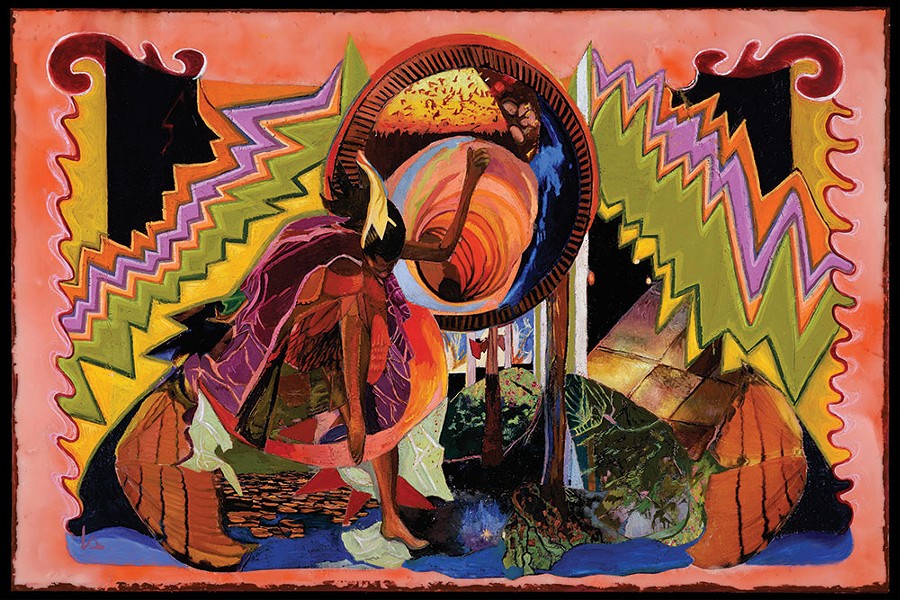 Last month at this time, I introduced the idea that late 2017 through 2018 brings a new era astrologically. While things are constantly changing in the sky (no two days are alike, and one day to the next can be distinctly different), what happens over the next year or so happens only rarely. This is when a series of slow-moving planets change signs around the same time.

The last time something similar to this happened was 2010 into 2012, when Chiron, Uranus, and Neptune changed signs in fairly close sequence. We were also experiencing a meeting of Uranus and Pluto in a 90-degree aspect. Think back on those years. They include the BP oil spill into the Gulf of Mexico (which started the day Chiron entered Pisces), and the multiple meltdowns and nuclear plant explosions at Fukushima (which happened the day Uranus entered Aries).

These were two irrevocable incidents that changed the world, damaged the environment, and set the tone for the era that was to come. In those years, we also experienced Arab Spring, the Wisconsin labor protests (please let's never forget these), the Occupy Wall Street movement, and the massacre at the Sandy Hook Elementary School in Newtown, Connecticut.

These were eventful years. We are on notice that things do indeed change and they do indeed fall apart. We see the limits of protest as a mode of social expression; in particular, the way that Arab Spring descended into tyranny and war.

Note that UFOs did not land on the White House lawn. The world did not end. Humanity did not ascend to the fifth dimension; most of humanity, however, did transform into the astral world of the internet, and we're now sharing an out-of-body experience through our touch-screen phones.

In the Background: Uranus Conjunct Eris

These are the slowest-moving planets recognized by mainstream astrology. (Eris, discovered in 2005, is still not getting the attention she deserves, which,if you know mythology at all, is not a good idea. It also demonstrates how astrologers tend to do their work looking into the rearview mirror of tradition.)

There have been many significant aspect patterns since 1891, though this series of conjunctions is in a class by itself. And we have one operating in the background right now. I say background because these aspects tend to color the environment in a way that's difficult to perceive. The background always is; we tend to notice the features dancing around on the stage, in the spotlight, or on TV.

I have covered many times in this space the relationship of Uranus conjunct Eris to electric media and, in the current era, the overwhelming digital environment. That would be more meaningful to those who have some clue as to our plight: the way that drowning in digital has restructured our minds and our society.

Again quoting Eric McLuhan, son of 20th-century media philosopher Marshall McLuhan, "The body is everywhere assaulted by all of our new media, a state which has resulted in deep disorientation of intellect and destabilization of culture throughout the world. In the age of disembodied communication, the meaning and significance and experience of the body is utterly transformed and distorted."

The body includes all levels of identity on the physical plane. Meditate on the words, "deep disorientation of intellect and destabilization of culture throughout the world." Remember them when you're seeing all this chaos unfold on TV, whatever that chaos might be. When you look at the world and think, This makes absolutely no sense whatsoever! say them softly to yourself.

Saturn was last in Capricorn from February 1988 through February 1991, its own momentous time in history, associated with the 1993 conjunction of Uranus and Neptune. It was a formative time for the world in which we are now living, including a similar phase of deconstruction and collapse prior to the "new world order" taking hold (borrowing a phrase from then president, George Bush the elder).

Saturn will be joining Pluto in Capricorn, which began back in 2008 and ends in early 2024. This, too, is one of those vast, sweeping background transits that sets the color and tone of the era in which it happens. For example, soon after Pluto (a kind of unstoppable force) entered Capricorn (the sign of society's structures), we had the banking collapse and the beginning of the so-called Great Recession.

When you have Saturn and Pluto in the same sign it means you're close to a Saturn-Pluto conjunction, which is another way of saying Big Astrology. Saturn conjunct Pluto (which happens once every 35 years) is the peak of Pluto in Capricorn; in other words, expect another wave of changes you never imagined possible.

There will be, at first, an opportunity to start some cleanup and reconstruction of the damage done (or demolition begun) in the Pluto-in-Capricorn era. This will feel good. It would also seem to suggest a new set of limits and a deepening of our mini-era of accountability.

While we're busy holding powerful people accountable for what we hear they do in the news, we need to honor one of the main purviews of Capricorn, the family. I am aware that the sign Cancer is usually associated with the household and the family, though really, it's the Cancer-Capricorn axis. We have some work to do here.

Notably, the first degree of Capricorn (where Saturn will soon be) is connected to the Aries Point. That is the first degree of the zodiac, which is an energetic hotspot. The 90-degree contact between Aries and Capricorn plugs them into the same energy circuit, called cardinal points (also associated with the seasons changing).

In practice, it's an intersection where the individual realm meets the collective (or said another way, where we discover that the personal is political). It may seem like we are flooded with Aries Point experiences at the moment; that's true. It's getting difficult to see much else. We are in a seemingly endless personal-is-political hurricane, though we're reacting in ways more appropriate for a walk in the park on a summer day.

Chiron in Aries: The Quest for Identity Pulled into Focus

Speaking of the Aries Point, Chiron is about to spend nearly a year dancing around on that degree, as it transitions from Pisces to Aries.

Chiron was last in Aries from mid-1968 through early 1976. Chiron arrives in Aries on April 17, 2018, and will begin its transition into Taurus in 2026. This transit in itself marks an era of history as well as an entire sub-generation of births.

Aries is the primary sign of identity. Wherever you have it in your chart is where (among other key places) you're likely to seek your sense of self. There's been little other than chaos unfolding in this sign recently. Within a very short time, intellectual and cultural chaos has reached a new order of magnitude.

Chiron's primary role is raising awareness and providing the means for healing. Raising awareness will consist of many clues about the extent to which obsessive, uncreative use of the internet has ravaged our sense of self and our ability to relate to one another in whole ways.

We play out the identity drama many ways: Chief among them is politicized sexual identity, and hyperbolically polarized political identity. We have become our own publicists and believe our own press releases. Our machines consume our time and mental bandwidth and teach us to be robots like they are.

This is no small matter. It will represent whatever aspect of your existence you have neglected. Chiron functions as a holographic influence; its role is to promote wholeness, balance and integration—this, in our era of fragmentation and radical imbalance.

Chiron's placement on the Aries Point also points to some radically raised awareness of the ways in which the public realm of things you read about on news websites makes itself known in our personal lives. The current political climate is all about personal attack. It's about government prying into the very most private aspects of our lives: abortion; and if that were not enough, trying to restrict birth control; curtailing access to medical insurance and medical care; mandatory "immunizations"; and a government policy that facilitates psychotics with machine guns opening fire on church congregations and music festivals.

I have to say, the extent to which the American public is a chump is truly impressive. At this rate, we will be quartering soldiers in our homes, even though the Constitution expressly forbids this. Chiron in Aries will push the truths of these issues onto us until we wake up, whether we slept through the point of no return or not. Chiron's action is gentle, at first. Then the calls to awaken become increasingly more shocking.

Uranus in Taurus: The Body Electric and the Quest for Values

Uranus is one of the original revolutionaries of the zodiac. Its motto is "Expect the unexpected," which is fairly well impossible. You can say it, but you cannot really do it. Still it's worth saying, as it makes a fantastic generic prediction for astrologers seeking a book deal. See! The unexpected happened! I told you! The thing is, due to the Taurus association with wealth, value and, to some degree, currency, there are likely to be some financial shocks (activity in Capricorn will facilitate that).

Taurus is one of those profoundly important signs relating to personal identity. It's almost as vital as Aries, only the identity factors are less conceptual and more tangibly physical. That is, identity in the style of Taurus is related to the body, to one's home, and to one's values and priorities.

This transit may represent a reawakening of physical consciousness: that is, bringing awareness back to the body, even if that happens as a result of being struck by lightning.

When so many outer planets change signs around the same time, society changes. The emphasis of our lives changes. History takes major turns, if only we would notice them. Well, it will be difficult not to notice, and perhaps more difficult to care. But that's what our lives are about now: the quest and the struggle to care, to really care.

These will also be some of the most exciting, interesting and creative years of our lives. If you want to sleep through them, it will be like pressing the snooze button with the hottest rave or rock concert going on in the next room, to which you have tickets. You will be happy you wake up, and will wonder what you were thinking if you don't.