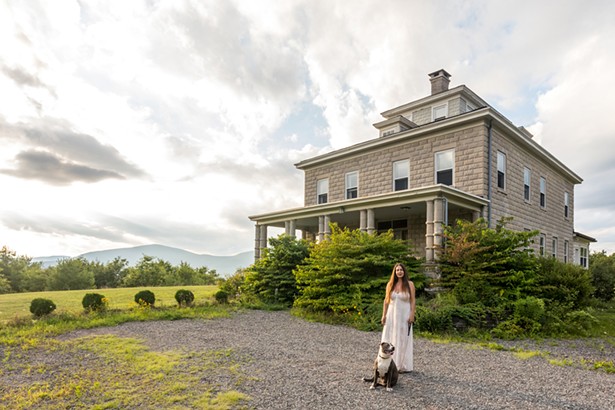 The day Diane Raimondo first happened on her hilltop West Hurley home, she was immediately taken by the vista. It was 2013, and she'd found the listing for the nine-acre property just south of the Ashokan Reservoir the day before. At the suggestion of the agent, she drove up from her Brooklyn brownstone and found her way to the property's dirt road. Winding her way through thick woods up alongside the hill, she finally came to a clearing, where, it seemed, the entirety of the 12-mile-long reservoir—all the way from the Ashokan High Point in the west to the Olivebridge dam in the east—was laid at her feet. At the apex of the hill, a 3,500-square-foot neoclassical manor stood overlooking it all. Right away, Raimondo realized there was something special about the place. "I came up the dirt road and turned the corner," she remembers. "As I parked, an eagle swooped down right over head."

Angular and symmetrically designed, the home's exterior is comprised of large beige bricks molded into distinctive, alternating patterns along the walls. A low-pitched roof with simple carved eaves tops the three-story house. At the home's entrance, five stone steps lead to a flat-roofed front portico running the width of the first floor. Twelve carved Ionic columns border the deep front porch providing enough sheltered space for ample outdoor seating. Throughout the grounds and bordering the home, previous residents planted a garden of flowering trees, shrubs, and plants, and a stone patio lays along the home's view-facing edge. 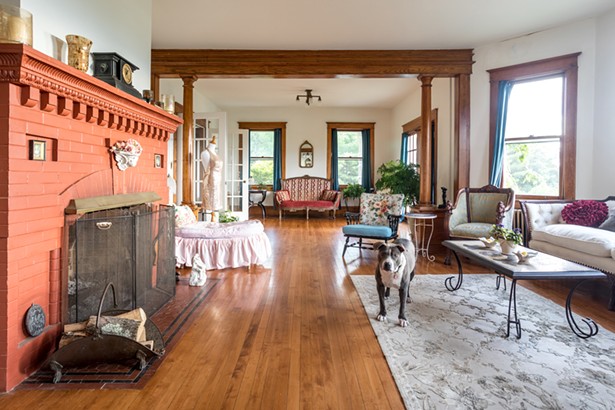 Although the house was completely shuttered and empty that day Raimondo first encountered it, the property caretaker, who lived in the stone guest cottage nearby, offered to show her inside. As the two walked through the house they drew open the wood-slatted blinds that covered the double hung windows one by one, as well as a set of French doors leading to the stone patio, revealing the bird's-eye view of the Ashokan Reservoir and the Catskill Mountains beyond. "I was just blown away," Raimondo remembers. "By the views, by the winds, by the house, by the whole feeling of it." Later that day, the caretaker sent her a picture of the sunset from the property. She immediately made an offer and shortly thereafter the home was hers.

A Little Piece of History

The home's sweeping panorama is no happy accident. Completed in 1918, the residence was carefully sited, designed, and built by J. Waldo Smith, the chief engineer of the Ashokan Reservoir project, as he supervised the dam and reservoir's completion in 1915—at the time, the largest in the world. Smith built the house out of the same local Rosendale cement blocks that were utilized in the construction of the Olivebridge Dam. (Before it was supplanted by Portland cement, Rosendale cement was known as the strongest in the world.) The cement was pressed into three different molds, and then laid into the variegated patterned walls of the home's exterior. 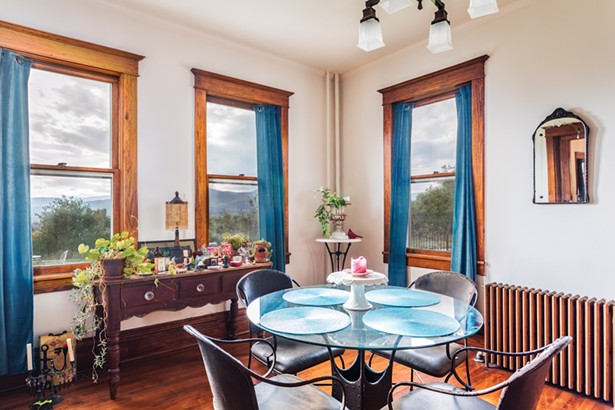 At the top of the house, Smith even designed an airy third-floor square cupola with windows in all directions where he kept a telescope fixed on the massive public works project below. Eventually, Smith and his family sold the house. Neighborhood legend has it that it was later used as a hospice, then the site of a commune, before it became the childhood home of the actor Chevy Chase. It served as a second home to multiple other families before Raimondo purchased it.

A Westchester native, Raimondo had frequented Woodstock many times before she moved to the area full-time. In college, she studied writing in Boston and then worked for a magazine there, often visiting Woodstock to see live music or visit friends. After a stint in San Francisco where she worked for the magazine Mother Jones, the 25th anniversary of the Woodstock festival brought her back to the area briefly in 1999, where she met a photographer and eventually moved with him to Amsterdam, becoming his assistant. 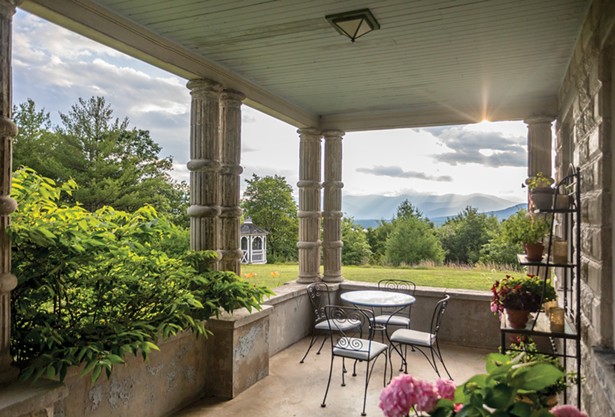 By the time Raimondo returned stateside, she'd made a full transition into the visual arts and landed a job licensing photography for Magnum Photos, a photojournalism studio in New York City. It proved to be a good fit. "Magnum photos is all about authenticity. Their photographers don't set things up: It's all about that decisive moment," she explains. "It's documentary photography, which is perfect because I like things in their natural state. It just goes with my sense of sensibility." In 2013, Magnum consented to let Raimondo work remotely and so she began looking for a full-time place upstate. "I tried to remember the places had I been that I didn't want to leave," she explains. "You know when you visit a place and you wish you could stay? That's how I'd always felt about Woodstock."

When Raimondo moved into the five-bedroom, three-bathroom house, it was in good shape, but still required some updating. Within a month of taking up residence, she installed a salt water pool at the side of the house and surrounded it with a bluestone patio to match the adjacent, existing patio. She enclosed the area with a decorative wrought iron fence, complementing the stone exterior of the home and the property's antique ambiance. Previous owners had added a modern kitchen to the back of the house, using it so infrequently that the appliances, cream-colored counters, and cabinetry were practically brand new. The three bathrooms had also been thoroughly updated with a mixture of modern amenities and period trim. The downstairs bathroom features a modern enclosed shower, white-wainscoted walls and an antique pedestal sink. The upstairs' master bath also has wainscoted walls, a modern shower stall, and a freestanding fully restored antique claw footed tub with views of the Ashokan. In every room, the original cast iron steam radiators had been well preserved, adding to the vintage feel of the home. 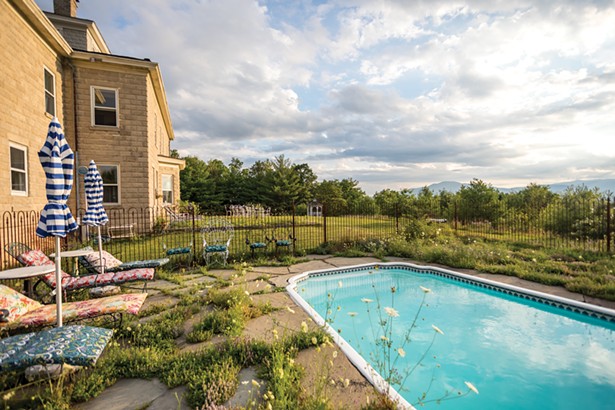 Throughout the house, the original design included richly hued red oak floorboards and trim complementing the stone exterior. Between the entrance parlor and the living room, pared down red oak columns stretch from floor to ceiling, mimicking the home's entrance and separating the two spaces. The living room, which features the original oversized red brick fireplace, is separated from the dining room by ornately carved red oak pocket doors. Red oak built-in cabinetry in the dining room and a hallway leading to the kitchen, now house Raimondo's family heirlooms. Each of the five upstairs' bedrooms also retained the original carved red oak doors. To complement the antique doors both upstairs and down, as well as more dramatically showcase the home's views, Raimondo stripped white paint from all the window frames, as well as the baseboards and the door casings to reveal the red oak underneath.

Since moving in, Raimondo has added her own vintage twist to the home's original design. Throughout the house she replaced the light fixtures with restored vintage lights from Fed-On Lights Antiques in Saugerties. To separate the kitchen from the dining room, she added stained glass French doors to the passageway between. She also added stained glass panels above the front door entrance. To keep with the period details, Raimondo has decorated the home with her large collection of antiques. The bedrooms feature wrought iron carved bed frames and Art Deco chests of drawers. The master bedroom has an Art Deco queen bed as well. Restored wing back chairs, benches, and an Art Deco style couch provide plenty of seating throughout the home. 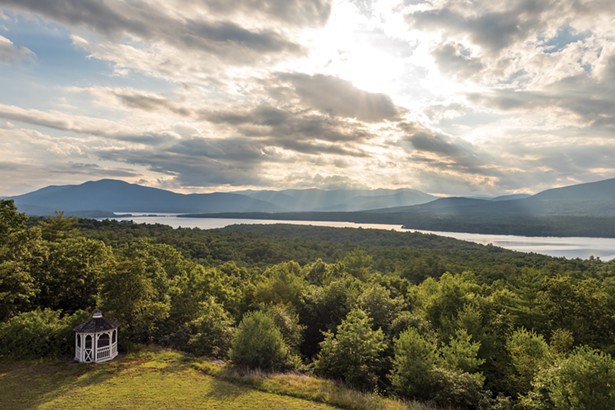 Raimondo converted the third-floor cupola to a breakfast room where every morning she and her guests can fully appreciate the home's historic view. While the house has changed very little since the days of J. Waldo Smith and his telescope, it has changed her since she's moved there. "It changes people," she explains of the home and its vista. "It's exactly how I felt changed when I first came up to Woodstock to see concerts years ago. It relaxes you. It just feels so peaceful."