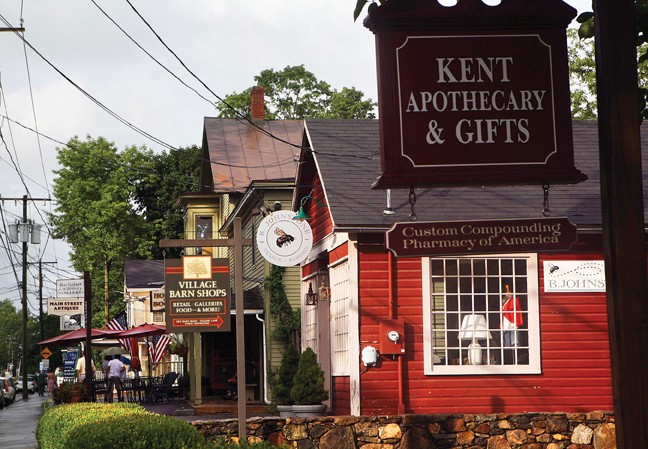 When New England poet Robert Frost wrote that “good fences make good neighbors” he probably had not yet visited Kent, Connecticut. Originally a farming community incorporated in 1739, Kent has grown from 1,500 to 3,000 in population, yet it’s still small enough that every neighbor’s input can echo throughout the town, which has expanded over the past 25 years into a profitable rural arts center.

Driving south from Cornwall on Route 7, a former Indian trail, one passes breathtaking Kent Falls, reputedly the highest falls in New England at 250 feet. Several miles later one approaches the town and Kent Green on the left, a lovely country shopping center of 25 businesses in a park setting that includes independent grocer Davis IGA, which has recently marked its 35th anniversary, a noteworthy achievement in the independent business environment in town.

Alternately, driving east from Dogtail Corners through a covered bridge across the Housatonic River, one approaches Beatty Automotive, near the intersection of Kent and Bulls Bridge roads. Here, proprietor Lorin Beatty has old local photos displayed in the waiting room, along with a very worn copy of One Small Town in World War II, which was published in 2006 by the Kent Historical Society and includes photos and stories of Kent boys going off to war.

When one drives around the unpaved roads that maintain the rural nature outside the city center, it’s intriguing to chat with the locals who have lived in Kent since the farming days, or since they decided, like many New York notables have, to make their weekend home a permanent one.

Nancy Hawley Wilsea, 93, has lived full time in the southern Kent Hollow area ever since she bought her cousins out in 1945, and expanded their circa-1731 family vacation farmhouse property into a dairy farm of 50 cows and 200 chickens. Brock-Hall Dairy distributed the milk in amber bottles throughout the region during the 1950s, and Wisea also delighted in turning the cooled milk into butter and cheese, “way ahead of Martha Stewart,” she says.

From their Fairfield County residence, Wilsea’s family sent the kids to the Kent farm during school vacations while her father worked as a doctor in the Bridgeport area. “We were little but we were put to work if we wanted to stay on the farm,” she says. “It was good for me. I learned how to milk cows, cut ice in the lake, and put sawdust around it to keep our food cold. It was fascinating. Once you’re exposed to farming, all of a sudden you always want to farm, from that day on. Everybody takes time to help their neighbors, the old-fashioned way.”

Farmland as Open Space
The Kent Land Trust grew out of a living room meeting in 1989 and is dedicated to maintaining the rural character and quality of life in Kent by preserving open space. The group is committed to protecting 20 acres of the town determined to be essential to the maintenance of Kent’s rural nature, as well as land and water resources, plant life and unique scenic, natural, and historic sites.

The president of the Kent Land Trust, Tony Zunino, explains that the group secured an 80-20 Department of Transporation beautification grant from the Federal Government to buffer five properties on the town’s southern edge, the goal being to bring farming back to Kent. This resulted in the trust opening a demonstration farm, stabilized barns, and an office on a 12-acre field 2.5 miles south of the town. Megan Haney leases this land from the trust and has been living there while developing the Marble Valley Farm for the past three years. It’s a small-scale organic vegetable and herb farm on three acres of workable land that borders the Housatonic River. Haney markets the produce through a farm stand and a 40-share CSA that involves 60 households. The farm stand is open Saturdays and Sundays June through October from 10am to 2pm.

Eventful Kent
August witnessed the annual Kent Sidewalk Festival, sponsored by the Kent Chamber of Commerce, which supports the community by drawing crowds to partake of reduced prices at the town’s independent retail stores. This past March, the fourth annual Kent Film Festival accomplished yet another successful event, screening world-class films at several locations in town and reporting 200 percent attendance growth since 2006. The Litchfield Jazz Festival was held from July 31 through August 2 at Kent School and included dozens of artists, such as Bill Henderson, Bucky Pizzarelli, Poncho Sanchez, and the Preservation Hall Jazz Band.

The mainstay of the local cultural juggernaut since 1923 has been the Kent Art Association, producing fine arts exhibitions and fundraisers to provide arts education opportunities. In 1984 Jacques Kaplan broke onto the scene and provided guiding impetus for the growth and development of the village as a center for the arts. Feeling disenchanted with the commercialism of New York art in the 1970s, he gravitated to Kent, where he serendipitously discovered both an 1800s country farmhouse and the red caboose where he created the Paris-New York-Kent Gallery.

Until his passing at 83 last July, Kaplan welcomed and encouraged talented, unknown artists. He showed them alongside the New York masters at his gallery, leading them to launch their art based on its intrinsic value above its monetary value. He staged legendary openings and weekly parties. As his widow, Violaine Bachelier, states, Kaplan was able to “recognize the authentic voice of an artist, the truth which brings one to the present moment, where life resides.”

The Bachelier-Cardonsky Gallery was established in 1988 and continues Kaplan’s tradition of tracking down and giving life to obscure artists. Bachelier, who comes from a background in psychology and the Paris antique business, and her gallery partner, Darby Cardonsky, continue to focus on regional artists they feel deserve wider recognition while simultaneously showing works of such established artists as David Konigsberg and Kathy Ruttenberg.

Rob Ober of Ober Gallery, who shares Kaplan’s great passion and excitement for the arts, was inspired in 2006 to open his own gallery, which features a large collection of modern Russian and German art, after having experienced life in Moscow during the 1980s while his father was an American diplomat and extensive collector of Russian icons. Ober also teaches history at Kent School and presents three lectures a year by art historians at the gallery.

Very recently joining the group of strong artistic destinations are the Morrison and Eckert galleries. Bill Morrison calls his 7,000-square-foot gallery on Old Barn Road “a dream space,” where he effectively combines country charm and urban edge. In a spacious environment filled with natural light, Morrison includes both established and emerging artists, in the now-established Kent tradition. Jane Eckert moved Eckert Fine Art Gallery from Olde Naples, Florida, to Kent, where she now rounds out the town’s art offerings in specializing in 19th- and early 20th-century American and European art.

Ellen Corsell has drawn folks to her Heron American Craft for more than two decades by celebrating a dynamic mix of handmade ceramics, blown glass, jewelry, and wood and metal work created by artisans from all over the country.

With the goal of expanding the neighborhood worldwide, ceramic artist and sculptor Joy Brown, along with her mentor, Denis Cooper, founded Still Mountain Center in 1998 on a wooded mountaintop. This nonprofit organization promotes artistic exchange between America and Asia, where Brown was raised as the daughter of medical missionaries to Japan. Each July a group of more than 25 artists gathers at Still Mountain for the Anagama Kiln Firing, a community “harvest” event in which each artist takes turns at tending the intense, 24/7 firing of their work in Brown’s 10-meter long, Japanese-style wood kiln. Brown’s primitive, earthtone figures are included in displays at her studio, which is open by appointment.

And so the farmers’ indelible imprint of support and neighborliness echoes today through Kent, and is now amplified to include the ever-expanding arts community.