Artist Paula Lalala Creates A Home From Her Art

In 1997, New York-based artist Paula Lalala took a trip back to her childhood home in Texas. She had left over 15 years before, and, after her parents' divorce, her siblings and mother had moved on as well—at that point, it was only her father living alone in the home they had all once shared. While it was a simple trip from New York to Texas, it was also, in effect, a trip back in time. "Very little had changed aesthetically or materially in the house," Lalala remembers. "My father was a very meticulous man—he was a dentist—and he kept all of the items in the exact same places they had been when I lived there as a girl. The glasses in the kitchen cabinet were arranged the same way they had always been; the books on the bookshelves were in the same order; the furniture was in the same locations. He did that for decades. It struck me that he was living in a museum."

The interdisciplinary artist, whose work combines photography, drawing, sculpture, and performance into "multi-sensory immersive installation and performance" was already focused on home as one of the prevailing themes of her art. "Homes—my own and other peoples—have always been significant sites for my work," she explains. "Some of my earliest art projects in the 1980s were installations in abandoned homes, barns, and vacant lots." By 1990, she was setting her large-scale exhibitions and art events in her home and, right before that pivotal journey in 1997, she'd orchestrated "Bravado Vibrato" in her Dumbo loft—an event that included music, art, and a five-hour long performance installation in which she attempted to cut up all of her clothing. (This early theme of self-destruction also runs through much of her work. "To destroy yourself," Lalala explains, "is a way to try to get to a deeper meaning.")

The confluence of those two events—the trip to her perfectly preserved childhood home and her home-based art installation—sparked the beginning of the "Paula Lalala MVSEVM," a 20-year-long art exhibit located in her residence. First opened in the autumn of 2001 in her Dumbo loft, the MVSEVM serves as both her home and also a "long-term, large-scale art project that explores the intersection of public and private life." As with any home, Lalala's memory and cumulative self, as well as the practicalities of daily life, are at its heart, but the accumulated transitional objects that serve that daily life and which over time acquire meaning have been cultivated into something much more than the sum of their parts. The MVSEVM also incorporates elements of a historic home museum, an interactive art exhibit, and also occasionally serves as a gallery and community event space. "It's like a beautiful jewel box full of treasure," she explains. "I don't think of art as separate from life and the Paula Lalala MVSEVM as one giant work of art."

A native of Texas, Lalala was born and raised in a devout fundamentalist Christian family. "Art was not allowed in the physical building due to [our] church's interpretation of the fourth commandment," she explains. It's the Biblical commandment against idolatry, which, when taken literally, forbids creating "graven images" or likenesses of anything "in heaven or earth or water." It was a directive her family took seriously. "It was a very strict upbringing," she remembers, "but also a suburban, middle-class American lifestyle that included swimming, horseback riding, and Girl Scouts." 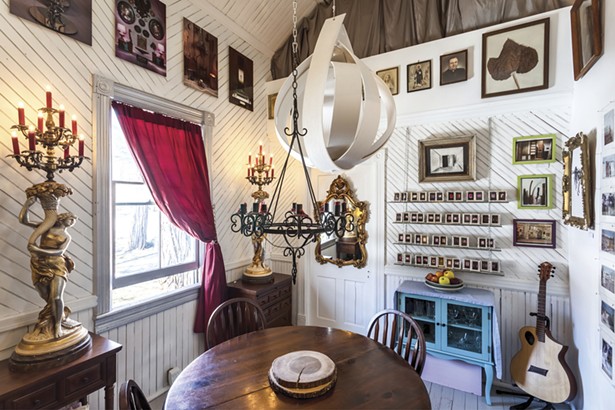 A series of traumatic events during her adolescence, including the deaths of close friends in quick succession and the rocky dissolution of her parents' marriage, led Lalala to run away from home and survive on the streets, where she suffered further trauma. Eventually, Lalala moved to Staten Island to live with an aunt and uncle, and at 17 she discovered art. It became a new form of spiritual practice for her as well as a way to both explore those early traumas and heal from them. "I am in pursuit of transformational experience and transcendence, which I see as a continuation of my early religious upbringing," she explains of her work. "Trauma during very early childhood can affect your entire life and alters your physiological and psychological responses to stress." In order to deal with trauma, victims often put themselves in harm's way again to relive an event and move past it. For Paula Lalala, art became that mechanism—allowing her to relive and work through past events in a creative environment rather than a dangerous one.

"It was the building that brought me here," Lalala says of her relocation to Cornwallville, a hamlet in Greene County she's happily embraced since happening upon it in 2010. Since its inception in 2001, the Paula Lalala MVSEVM has received thousands of visitors as it evolved through multiple iterations, moving from Dumbo to Massachusetts then back to Bushwick. (Sections of the MVSEVM have also been on loan for exhibition in other venues as well.) As it grew, Lalala realized she would need a more versatile space and spent three years searching for a suitable new home. "I had a very specific set of requirements," she says of her quest. "It needed to be within my budget, within a three-hour radius from Brooklyn, have a minimum of 2,000 square feet, and a ceiling height of at least 11 feet."

She found everything she was looking for, and more, in a former church hall situated in the Cornwallville Historic District, half-way down the north face of the Catskills. Dating from the 1870s, the simple 2,200-square-foot building was constructed in a regional style of woodworking partially lost to the ages, but which Lalala thinks of as "tramp art." The building retains many of the remnants of its days at the center of the surrounding community, including a wide double-door entrance and an elevated, open patio; a galley kitchen, an open central hall with 12-foot ceilings and a stage area at the rear, which now serves as Lalala's studio space. (The original, adjacent 18th-century Methodist church was moved to the Farmers' Museum in Cooperstown in the 1960s). "Over the years I've met many people who have spoken to me about being in plays here, of attending socials and potlucks or even weddings," she says. "I've been delighted by the community and their response to my presence here and I love the way the building is situated within the hamlet."

Before Lalala bought it and transformed it into the fifth iteration of the MVSEVM—which she calls "Churchlands," the building had also been a woodworking shop and a yoga studio, and had remained in good repair. "When I acquired it, it was painted three or four shades of green," she remembers. Besides repainting all but part of the ceiling with silver trim, Lalala installed a bedroom as well as a guest exhibition space to feature other artists' work. Near the main entrance, the one bathroom, finished in white penny tiles, included a cut-out window. "I think they must have used it to take tickets at one time," she says. "I covered that space with a medicine cabinet." Downstairs, the church hall basement continues to be utilized for multiple art and community gatherings, carrying on the building's tradition.

In hindsight, Lalala recognizes her father's impulse to perfectly preserve their family home as a coping mechanism. "He froze," she explains, recalling the common "fight, flight, or freeze" response to traumatic events. While Lalala has also created a museum of her life, there is nothing frozen about her living art project. She doesn't flee from her past, either. Rather, the ever-unfolding, lively work-in-progress that is her home engages with the events of her life—not to fight with them, but instead in a kind of dance. Sometimes inquisitive, sometimes whimsical, sometimes shocking, her work is overwhelmingly compassionate toward both her own family's story as well as her own. "Communing and communicating with others in an emotional way has been an aspiration of my work from the start," Lalala says. "The physical senses are a direct way to stir emotions in a profound way. I want to let people know they aren't alone in their suffering. My belief is that this is the road to healing on a societal level. Everything we do is toward persevering."