“Faith” is the title of a current exhibition at Fovea Exhibitions in Beacon curated by Michael Itkoff, and it is worth recalling the breadth of meanings associated with the title of this show. Webster’s defines faith as:

1a: allegiance to duty or a person: loyalty b (1): fidelity to one’s promises (2): sincerity of intentions

2a (1): belief and trust in and loyalty to God (2) : belief in the traditional doctrines of a religion b (1): firm belief in something for which there is no proof (2): complete trust

3: something that is believed especially with strong conviction; especially: a system of religious beliefs <the Protestant faith>

This exhibition of lush black and white photographs shot with an 8” x 10” field camera by Boston-based photographer Christopher Churchill documents his wanderings across the United States. There is already a kind of faith implied in the very proposition that, leaving home, camera in hand, one will find images worthy of “art”—itself a system of belief in beauty, significance, and value. In producing this work, he traveled throughout the country without any specific route, relying upon unrelated events to guide him to different destinations and encounters. Churchill says, “During these trips, randomly driving around the country, events occurred all the time that made me feel a part of something larger. As I began to release control and trust in these seemingly random occurrences amazing things would happen. I began to accept these sequences of events as a manifestation of my own faith and deeper understanding of my place in the world.”

The subjects themselves include the overtly religious, such as an image from 2009, Bellevue Baptist Church, taken in Cordova, Tennessee. It depicts three illuminated crosses that seem to hover over a roadway. Shot from the median, the “no man’s land” between two strips of road, the incandescent light of the crosses competes with that of the streetlights that frame them. Visitors at the Grand Canyon East Entrance of 2007, shot in Arizona, is an image of the contemporary sublime. It speaks of America’s historical association of the vastness of this land with religious feeling. Of course, these are tourists we see perched at the edge of the abyss, enjoying the view from a safe distance (a distance that Immanuel Kant insisted was necessary for the appreciation of the sublime—that terrifying side of nature that threatens to overwhelm us). The work recalls the pictorial conventions of 19th century landscape painting, pitting the smallness of man against the vastness of nature though a dramatic shift in scale.

Churchill also explores portraiture, photographing a wide range of subjects, including a soldier in New Mexico, two Huddite girls in Gildford, Montana, a couple of voodoo priestesses in New Orleans, and an Elvis impersonator in Las Vegas. There is a timelessness to these images and Churchill’s choice of subjects reflects a desire to find what might be called the “eternal” within American vernacular culture.

Churchill’s take on “faith” is sophisticated. The show is about how the idea of faith makes itself felt though images, which is to say that there is enough critical distance between the artist and his subjects to allow for open interpretations on the part of the viewer. Perhaps the ‘firm belief in something for which there is no proof’ is the most appropriate definition of faith in relation to this work. What that ‘something’ is, is, thankfully, left unanswered. 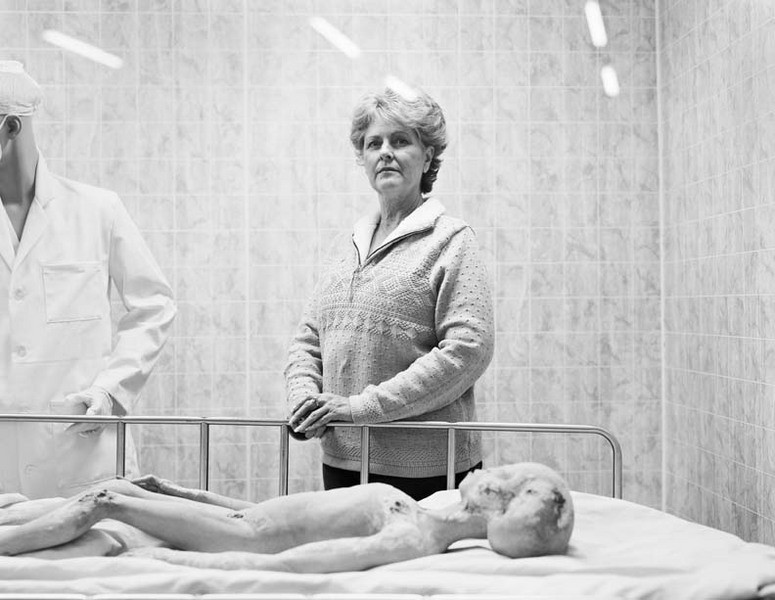