Paddling is a term used by ceramic artists referring to the gentle patting and shaping of malleable clay forms with flattened wooden tools. The six large ceramic sculptures by English-American artist Tony Moore centering the two-person exhibition “Sacred Structures,” curated by Osi Audu and with photographs by Kenro Izu at the Woodstock Byrdcliffe Guild's Kleinert/James Art Center, were whacked into shape using a two-by-four. Displacing the masses of the six 450 lb. lumps of clay that were beaten, wire-cut, and stamped into the pieces on view, was an immersive process for Moore; one of passion and discovery grounded in his awe of nature, which he has come to experience as an all-encompassing reality. Made during the cauldron of events that was 2017, these are works that were ultimately brought to life in the elemental fire of Moore’s hybrid Anagama-Noborigama wood-fire kiln. He came away with an injured shoulder and nine monuments (six of which are in this show) inspired by a quote from Martin Luther King: “Our generation will have to repent not only the words and acts of the children of darkness but also for the fears and apathy of the children of light.”

Monuments are typically larger than life and often commemorate heroes and achievements of the past. Moore’s, which include steel pedestals of his own making, are scaled to human proportions and are, on one level, calls to action now. At the same time, the internal geometries of the formal elements of the finished pieces create relationships that intimate much larger structures. In them, viewers with creative imaginations will see huge natural and architectural configurations in their minds’ eyes. There is an aura of timelessness emanating from these pieces summoning up echoes from the past: dwellings, hermit caves, ancient cultures, and civilizations. Also summoned up are probing themes of evolution, justice, and the crises that currently face humanity.

Moore says that his approach to making this body of work was related to a 17-year hiatus from sculpture beginning in the early 1980s when his creative focus was painting. Working on large canvasses on the floor, he came to view his paintings as “arenas of activity” where his art played itself out moment to moment. While the ongoing socio-political situation was an aspect of his awareness as he worked, many other factors entered in: personal history, prior works, and above all nature, manifesting as growth, vitality, and energy as well as imagery.

Although his lengthy foray into painting was influenced by the sacred geometry of Barnett Newman and Mark Rothko, among others, his overriding goal has consistently been to supersede prior concepts and ways of expression. During his transitional period of the `80s and `90s, a new form of expression began to germinate—"one very much his own—"as Moore began seriously collecting ceramic art, eventually prompting a friend to ask, “What is this with you and clay?” One thing led to another and in 1997 he was offered a ceramics residency at Byrdcliffe. Having spent decades in the art world of Brooklyn, the experience was revelatory on many levels. Gone was the competitive, hustling environment of art in the city. Here was natural space, mind space, a supportive community, and the visceral process of sculpting with clay and fire. 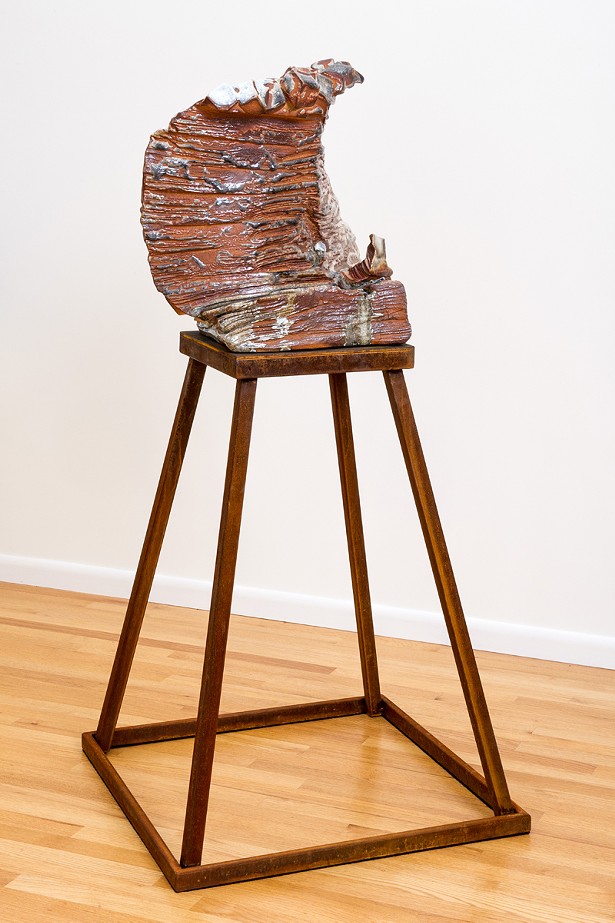 While he was working his way through all this, Moore was also engaged in a psychological rite of passage, fending off depression and disillusionment through seeking wisdom and healing in Zen, insight meditation, and various other therapies and disciplines. He states that from the beginning of his self-identification as an artist as a teenager to the present day, there has always been a spiritual dimension to his work. Though he earned a master’s degree in Sculpture at Yale, and is well versed in art history, theory, and contemporary art developments, wrestling things out conceptually is only part of his practice; it is not the core. It is not unlike the difference between being a scholar of spiritual traditions and an active practitioner who has internalized the essence of the teachings and put them into daily practice. Moore points out that ceramic art has its masters that pass down traditions. He has built upon and reinvigorated them to actualize his vision. While Moore’s sculptures can be decoded in various ways, they not only evoke but embody the trans-conceptual truths they convey. The artist’s process is one of discovery rather than creation.

Moore’s piece Injustice of Silence bears the striated marks of the two-by-four that was used to pound its twisting and ascending form upwards. Stamps punctuate its surface, the letter forms silently intoning “Children of Light.” The square imprints also punctuate the surface of clay building blocks that were literally hurled by the artist at the emerging writhing shape in a kind of madman’s game of Jenga, the cubes and their message distorted in the energizing process. Working in this way is risky—"there is no armature, the whole thing could have collapsed at any moment of misguided action. Yet Moore reports that never happened.

In another of the works in the show, Apparition, a reddish wave rises ominously above a small abstracted figure—"might it be a seal? Perhaps. The artist acknowledges the inevitability of visual associations while rejecting mimesis as limiting “ambiguity, aliveness, and engagement.” The wave remains frozen in a moment of stasis, like the sculpture in its making, evoking the future forever emerging and calling on us to engage.

Tony Moore’s sculptures are on view as part of the exhibition “Sacred Structures” (along with photographs by Kenro Izu) at the Kleinert/James Center for the Arts through October 3.