Art of the Carbon Footprint

Collectors change the shape of art. A wealthy aging aesthete develops a fondness for butterflies. He buys every depiction of a butterfly he can find. Then he dies, and 12 years later you’re walking through three rooms of butterfly etchings at the Morgan Library.

Dr. John P. Eckblad of Chapel Hill, North Carolina, is one such collector. For the last 35 years, while working as a management consultant, Eckblad assembled a body of prints depicting the coal and iron industries. “At the Heart of Progress: Coal, Iron, and Steam Since 1750” is the resulting show, and is now on exhibit through March 21 at the Loeb Art Center in Vassar College.

Like me, you may associate industrial art with triumphalist corporate propaganda of the 1950s. If so, you will be startled by the beauty and variety of this show. To begin with, there are no photographs. Every piece is drawn by a human hand. Secondly, Eckblad divides his time between Chapel Hill and Paris, so he has collected many French artworks. Corporate posters from 1890s France are witty and colorful, while anarchists like Camille Pissarro and Maximilien Luce produced wrenching works of outrage (often in black and white). And Eckblad has a wonderful eye.

“At the Heart of Progress” considers “the Faustian bargain between humanity and carbon. Though the trinity of coal, iron, and steam supports industrial civilization, the enormous benefits are counterbalanced by equally enormous tolls,” notes Patricia Phagan, curator of prints and drawings at the Loeb Art Center. William Blake wrote:

And did the Countenance Divine
Shine forth upon our clouded hills?
And was Jerusalem builded here
Among these dark Satanic mills?

Simultaneously, William Pickett produced etchings of the ironworks at Colebrookdale for the book The Romantic and Picturesque Scenery of England and Wales—bucolic renderings of factories amidst their clouded hills. A hundred years later, angry artists began to attack the exploitation of mine owners. This style eventually became known as “socialist realism,” and its mood was heroic. Whatever you think of socialism, you may admire the mighty workers who merge with their machines to become half man-half mechanism, like modern centaurs. (Will anyone produce a mezzotint today of the current proletariat—behind the counter at Wal-Mart, passing the scanner over bars of soap?) Even some of the titles convey anguish, such as Cesar Klein’s The One Who Does Not Work is His Children’s Gravedigger (1919).

This is a man’s world, largely—male artists celebrating brawny male workers. Am I imagining a touch of homoeroticism in these virile images? One exception is a French lithograph by Maxime Dethomas of a large family gathered around the entrance to a mine. The father is missing. Is he at work, injured—or dead? This question hangs over the picture, and also over the life of every miner. (The cryptic text of the poster reads: “National Loan: 1920.”)

The exhibit also includes one toy: a miniature coal mine, operated by a windup key, produced in Germany probably in the 1950s. 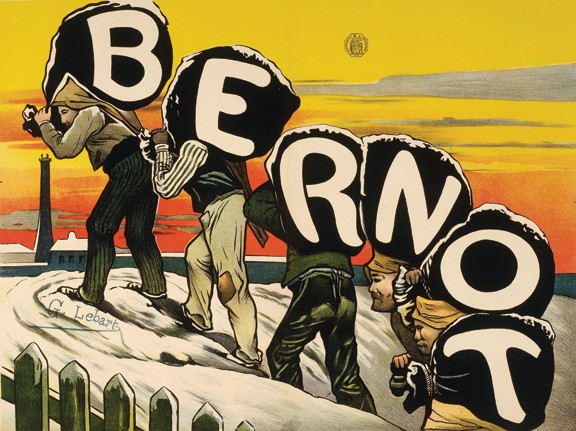