Ars Choralis has been serving the community with choral performances for 48 years, and Barbara Pickhardt has been involved since the beginning, first as a singer and now as conductor. We asked her about the group's evolution.

Why do you think Ars Choralis has such longevity?

From performing exclusively sacred music of the 16th and 17th centuries, the chorus has evolved to include all styles and periods. Concerts have expanded to include theatrical elements and, recently, to spotlight social issues. Music in Desperate Times told the story of women in concentration camps surviving the Holocaust by playing in an orchestra; Peace in the Midst of War is the story of soldiers who laid down their arms during the Christmas Truce of 1914. Our deep and varied repertoire has also enabled us to respond quickly to extraordinary times of confusion or catastrophes with "pop-up" concerts designed to give solace and promote healing.

How do people get involved? What level of musicianship is required?

Most of our singers come to us after attending one of our concerts or hearing about us from a friend or neighbor. The common denominator is love of singing and respect for the art. Members have varied skill levels but are equal in their desire to do everything possible to bring the music to its fullest expression. Rehearsals are demanding, fast-paced and fun. That may sound like a contradiction, but there is a warmth among the group that creates a lightheartedness. We experience the music from the first fumbling reading through the thrill of concert performance. That journey creates bonds of unity and fosters fine ensemble singing.

Your June show is "Music of Copland and Haydn: Appalachian Spring, Mass for Troubled Times and more!" Can you tell me about the selection process?

In 2016-2017 we've performed a WWI concert (peace among soldiers), an Inauguration Day concert for unity and a "theme" concert celebrating women composers and artists, all including many smaller works drawn from centuries of musical expression. As a finale, it seemed time to do a larger classical choral masterwork.

Mass for Troubled Times, later renamed Lord Nelson Mass, was Haydn's response to a Europe in turmoil. Aaron Copland's work expresses the American spirit that grew from our multicultural foundation—recognizing, welcoming and celebrating our differences. 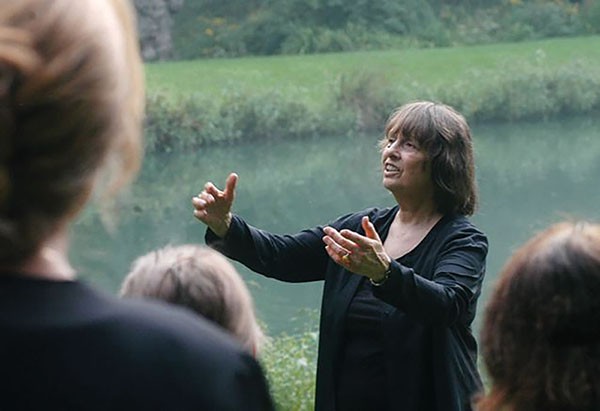