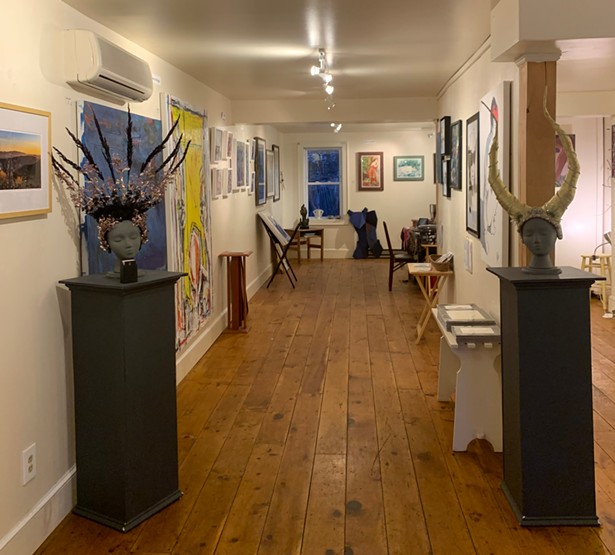 When Sylvia Diaz was organizing the 2017 New Paltz Open Studio Tour, she came across lots of talented artists with large bodies of work but nowhere to show them. “I met all these great artists with work that was collecting dust, and they didn’t know how to market it,” Diaz says of the event, when artists in the Hudson Valley town invite the public into their studios. “I started representing several of them and finding places for them to exhibit, but I thought if I could showcase their work locally, I could lower the price and they’d have a place to exhibit.”

In June 2019, Diaz, who has a marketing background, opened the Art JuXtapose gallery in Rosendale, a small town a few miles north of New Paltz. Determined not to be “out of here in two months if things didn’t sell,” she came up with a nontraditional business plan: renting her wall space to artists.

Diaz isn’t alone. Other Hudson Valley gallery owners have created business models that help ensure they can survive whether or not they sell art—and the region’s many artists are paying to play. Many have fled New York City in search of more affordable living and studio space and are looking for ways to stand out from the crowd. The new business models capitalize on their eagerness to exhibit amid a finite amount of exhibition space.

With art sales increasingly moving to online venues and high-priced art fairs while the number of physical galleries dwindles, having an alternative business model makes sense, experts say—especially in a small market like the Hudson Valley, where many traditional retail galleries have closed. “The democratization of access to art space is an outgrowth of seeing a demand,” says Joanna Frang, executive director of the Barrett Art Center in Poughkeepsie. “It’s a smart move.”

Although all the new galleries have closed temporarily in compliance with Gov. Andrew Cuomo’s order for non-essential businesses, they expect to be able to withstand the downturn as the payments they collect from artists cover their rent. “I’ll be able to weather the storm because of my model,” Diaz says.

The shift has been working out for longtime local artist Matt Maley, who found a predictable source of income by joining a new art co-op. “Most of the local galleries I was involved with sadly had closed,” Maley says. “I was selling sculpture in four retail gallery spaces in New Paltz, Woodstock, and Saugerties that are gone now.”

The new galleries often require the artists to gallery-sit one or two days a month to reduce costs that would otherwise be spent on hiring staff. Their monthly openings and art programming, such as artists’ talks and drawing classes, have brought buzz and foot traffic to quiet main drags that needed more of both.

Diaz thought she might have trouble filling her wall space, but it has been fully rented since the gallery opened. The artists, whom she recruits through social media and word of mouth, commit to pay a monthly fee of between $85 and $135 for six months. They also agree to gallery-sit for six hours a month or teach a course at the gallery. In return, Diaz markets their work, holds a monthly opening, and forgoes a commission on art sales.

Several pieces of the artwork carry a price tag of more than $1,000, and a bronze torso by Alfredo Cardenas costs $10,000, but most of the art is affordably priced between $25 for a postcard-size painting and $500.

Sales have increased every month, Diaz says, and around 10 artists have netted a profit. The model has exceeded her expectations to the point that she had been shopping for additional gallery space in Poughkeepsie and Saugerties before the coronavirus hit and expects to continue after it has been contained.

“Places like this are always great to find something for a reasonable price,” says Christoph Hitz, an editorial illustrator who lives near Art JuXtapose and was browsing at a pre-coronavirus art opening. “When I go to the wine store, my goal is to get the best wine for the cheapest price, and it’s the same here.”

Founded by six artists, Queen City 15 in Poughkeepsie opened in late 2018 and now has 12 dues-paying members. “We wanted to be in downtown Poughkeepsie because we think we can be part of the beautification process that the city is going through,” says cofounder Paola Bari, a ceramicist. “But where we are, we knew we couldn’t rely on gallery sales to keep the business going.”

The co-founders settled on a co-op model with monthly membership dues ranging from $40 to $200, a 10 percent to 30 percent commission on sales, and a gallery-sitting requirement that enables Queen City to be fully staffed by its members. “We’re keeping the membership as low as possible to allow more artists to be able to join us,” Bari says. “Our goal is to promote the artist and be able to give back to the artist as much as possible.”

The gallery promotes the artists through monthly openings that had been drawing up to 150 attendees as well as moderated talks in which the artists describe their creative path and process. Works range from $100 to $10,000, and the gallery sold about $20,000 worth of art in the six-month period ending in December. Members of the public can make an appointment to view the current exhibit. “Art is a point of comfort in these trying times,” Bari says.

One new Queen City recruit said he was disappointed by sales, but is glad he joined anyway. “Sometimes it felt like it was mostly artists just going to each other’s shows, and no one was buying or selling,” says Tom Ellman, a computer science professor at Vassar College and computational artist who joined the co-op last September. “But for someone like me, who has no track record, this is really the only way I can show my work in a public space. I can talk to people about my work, which is very helpful, and I have to come up with something each month, which keeps me focused.”

Although Hastings-on-Hudson artist Victoria Bugbee hasn’t sold work through her $135-a-month space on Art JuXtapose’s walls, she also says it was a worthwhile investment in her career that has provided her with a community of supportive artists. “The response has been great, and it’s helped me build a social media following,” Bugbee says.

The nonprofit Roost Studios & Art Gallery in New Paltz opened in 2016 with “the mission of building community through the arts,” says co-founder Marcy Bernstein, a former high school art teacher. Roost combines the art co-op model with a gift shop and an online store, and rents the entire gallery to local arts groups for between $25 and $35 an hour. The groups had been holding classes ranging from life drawing to theater for girls and tai chi nearly every evening before the gallery’s recent closing. The two-week closing was announced on the gallery’s Facebook page, along with a link to its online store and an invitation to make an appointment to view its current show.

Bernstein says she isn’t too worried. “We’ll be fine. Our main source of revenue is members’ dues, and dues are paid in advance.”

They range from $25 for student memberships to $1,500 plus a $200 initiation fee for full memberships. The gallery’s 16 full members get a month-long solo exhibit every two years and free use of the gallery for events and classes. The gallery also has a dozen lesser memberships, receives donations, and takes a 20 percent commission on members’ sales and a 40 percent commission on non-members’ sales. With gallery members working two three-hour shifts a month, Roost has had to hire only two part-time workers.

“Although New Paltz has a reputation as an artsy village, we thought it was unlikely that a traditional commercial retail gallery would flourish here if it was depending solely on art sales,” Bernstein says.

Roost artwork ranges from $50 to $2,000, and the gallery also rents art with the option to buy, Bernstein says, so community members can “try a work of art in their home before committing to live with it and break down payments into manageable monthly increments.”

Maley has sold about 30 sculptures ranging from $50 to $1,200 since he joined Roost in 2018, thanks largely to a solo show last year. Nearly all his art sales nowadays are through the gallery. “I felt Roost could be the space to experiment and grow as an artist,” Maley says. “I wasn’t sure how I would do, but like anything that requires a lot of self-motivation, I went in with the understanding that you get what you put into it. And I have been pleasantly surprised.”

As for the coronavirus, he says, “Who knows when a point of no return would happen with spaces that rely on social and community connections to exist. Can an average artist afford to re-up after this madness begins to pass? But this is also a great time to build up inventory. This nightmare eventually has to end.”