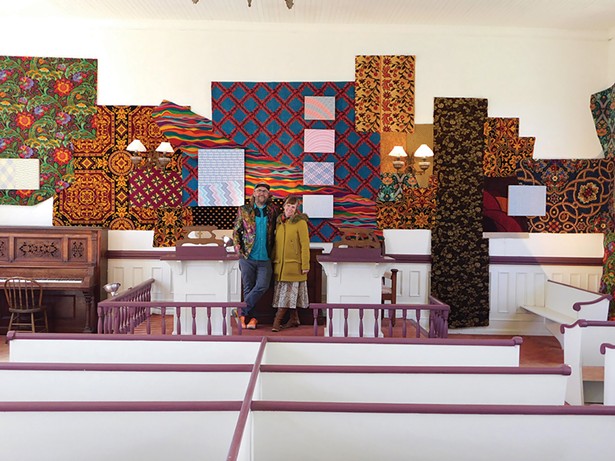 “I always wanted to become an inventor,” remarks photographic artist Liz Nielsen. In a sense, she got her wish. She creates photograms—direct exposures of light onto photographic paper, without a negative. By blocking off sections of the paper and using different wavelengths of light, Nielsen creates an abstract tapestry, which may resemble a mountain or a frozen lake or an upside-down owl. “There could be anywhere from four to 60 exposures of light on a single piece of paper,” she explains. Some of her techniques are unique to her studio. “Spooky Action,” a collection of her work, will appear at Art Austerlitz from June 5 to 27.

Art Austerlitz is the brainchild of Ryan Turley, an artist who approached the Old Austerlitz Historical Society with the suggestion to transform an unused church into a contemporary art gallery. Last year was the initial show, but 2021 is the first full season, with monthly shows running through the end of September. All participating artists are from the Hudson Valley or the Berkshires; some are part-timers, some are natives.

When an artist curates a show, it’s always either really weird or highly insightful. I can assure you that Turley’s current exhibition is the latter. So selfless is the curator that he does not include his own work in his schedule. (Turley makes colored drawings with dazzling geometric patterning.)

The church is a simple wooden structure built in 1853 by an obscure denomination called the Christian Connexion (which happens to sound like a modern dating app). Painted white with mauve accents on the pews, the room seems to patiently await its congregation—the religious equivalent of a ghost ship. The only incongruous note is an elaborate bronze chandelier in the center of the ceiling, comprising 12 smaller lamps, originally kerosene. The numerous clear windows—some with wavy 19th-century panes—let in so much light that the art needs no special illumination.

Every part of a church has a symbolic meaning: the vestibule, the nave, the aisle, the pulpit. Around the perimeter of the room, where the art hangs in this gallery, would traditionally be the Stations of the Cross. Nielsen plans to install a triptych on the altar.

An irregular ring of sculptures—on view all summer—circles the church, including four by Bijan, an artist who creates iconic works in metal, which he displays at his sculpture park nearby, the Circle Museum. One work, 15 feet high, looks like a car bumper tied into a knot by a playful giant. Stuart Farmery supplied another four sculptures: roughhewn wooden pieces painted primary colors, resembling tribal percussion instruments.

Martine Kaczynski makes casts, in silicone rubber, of colorful balls for children—not soccer balls or basketballs, but spheres for four-year-olds to kick around. She plants them in unlikely locations around the property, so that few observers will guess that they’re artworks. A melancholy cast of a deflated ball reposes on the windowsill behind the modest church organ. Together, Kaczynski calls these pieces “Random Uncertainty.”

Kate Skakel’s installation Murmurations began with several videos she shot in Rome two years ago, of a flock of starlings moving in one synchronized rippling mass. (A crowd of starlings is technically a “murmuration.”) Skakel fashioned approximately 500 rectangles of blue fabric, hung them from strings, and will project the videos on them in a darkened room. The fabric, slightly stiffened with glue, responds to the slightest air currents, fluttering like a bevy of birds. Murmurations will be shown in a barn across from the church from June 19 to July 25.