On the 200-acre site of a former dairy farm in Rhinebeck, Amy Goldman has built a fortress around her vegetable gardens. Accessed through a gate by way of a call button, a half-mile driveway meanders through fields and forests, lined by stone walls, sugar maples, and a pond the size of a small lake. Near the heart of the property, a second gate opens at a vehicle’s approach. An impeccably restored 1788 Colonial farmhouse graces the inner sanctum, with a glass-walled greenhouse nearby, adjoining potting shed, and brick-lined herb garden. The grounds buzz with activity in early June: Goslings stagger across the lawn and rouse a trio of Indian Runner ducks from their preening. Beyond the fowl, workmen move trees while college interns prepare a vine-draped pergola for the onslaught of visitors Goldman expects through summer, heralded by the August publication of her third book, The Heirloom Tomato—From Garden to Table: Recipes, Portraits, and History of the World’s Most Beautiful Fruit (Bloomsbury).

Goldman has good reason to believe that if she wrote it they will come. After the publication of her previous books, journalists, photographers, and videographers from the New York Times, the Washington Post, and “The Victory Garden” flocked to her gardens. Goldman is far more than a gardener. Equal parts author, detective, and plantsmith, Goldman researches, propagates, grows, tastes, preserves, and promotes heirloom vegetables and records her findings, which she has been doing for 35 years. Most recently her life has been consumed with tomatoes. Before that it was squash, and before that, melons. Both obsessions led to books—Melons for the Passionate Grower (Artisan, 2002) and The Compleat Squash (Artisan, 2004).

Goldman grows tomatoes—and all her heirloom vegetables—because they are living folklore: rare, beautiful, historic, and, at their culinary best, more delicious than mass-market commodities. She also grows them because heirloom seeds contain valuable genetic diversity that is rapidly disappearing from the Earth. Goldman is part of what she describes as a subversive subculture that aims to keep this genetic material alive. Members are as varied as government officials, homesteaders in Appalachia, and hobbyist kitchen-gardeners.

Goldman sets a bronze casting of a giant tomato onto the table in her screened porch overlooking the pond. She flips open the first copy of her new book to a full-page photograph of the original specimen. Its name is Radiator Charlie’s Mortgage Lifter and its line can be traced back to West Virginia in the 1930s. Goldman says, “My mission in life is to get seeds back into the hands of farmers and gardeners.” She is on the board of the New York Botanical Garden and the New York Restoration Project, and is a chair of the board of the Seed Savers Exchange, the largest organization of its kind in the world. She travels across the globe to attend conferences and farmers markets and her eyes are always scouting. On a trip to New Zealand she saw fields of blue pumpkins. On a stroll in the Galapagos Islands, off the coast of Ecuador, she spotted the foliage of a wild tomato sprawling on the ground. She took a cluster home, planted the seeds, and named the resulting cultivar, with its tiny, juicy fruit, Sara’s Galapagos, for her daughter. Goldman later offered the seeds to the Seed Savers Exchange and they can now be found commercially.

The heirloom movement is gaining ground. This year marks the opening of the Global Seed Vault in Norway—a storage facility built into the side of a mountain and descending 500 feet down into the permafrost. It was constructed to withstand bomb blasts and earthquakes, and already holds millions of seed samples from around the world.


An heirloom, according to the Seed Savers Exchange, is any garden plant that has a history of being passed down within a family. It is also described as a plant whose lineage can be traced at least 50 years. When pollinated with another of its kind, an heirloom produces a plant that grows, looks, and tastes the same as its parents. This is in contrast to the common F1 hybrids that make up the bulk of the commercially grown crops we eat. Grow a plant from the seed of a hybrid salad tomato from your local supermarket and there is no telling what kind of tomatoes the plant will produce.

Hybridizing is not new. Farmers and scientists have long known that pollinating a robust grower with a drought-tolerant specimen, for instance, may result in a plant that has a better chance in a dry environment. Mega sized agricultural corporations have taken the science to a new level, even crossing organisms and introducing the genetic material of mice, fish, and fruit flies into food crops. The use of terminator technology and suicide seeds—which produce sterile seeds—would biologically prevent farmers and gardeners from being able to grow anything at all from their crops, guaranteeing agricultural patents. “Greed, that’s the bottom line,” says Goldman. “It’s about controlling the first link in the food chain.” The greatest danger of exclusively growing fields of controlled hybrid and genetically modified plants is that the vast array of plants once available will die out, as will their unique genetic code. In the future, should we happen to see changing weather patterns, or new molds, fungus, and bacteria strains, there will be a very limited gene pool from which to source adaptations. The New York Times recently reported that three-quarters of biodiversity in crops has been lost in the last century.

FAMILY JEWELS
Over the past five years Goldman has grown over 1,000 varieties of tomatoes, chosen first from her favorites and then by recommendation, with names that are the fodder of fairy tales: Old Ivory Egg, Golden Ponderosa, Long Tom, White Beauty, Red Rose. She grows her tomatoes in a fenced, one-acre garden near the border of her land, and she keeps an isolation garden at the center of the property. It is located a half mile from any other garden and is where she experiments with the open pollination of heirlooms—without fear the busy bees will cross-breed the cultivars she wishes to keep pure.

Her tomatoes range from the unusual to the familiar. Of the Red Currant, a blood-red, early crop tomato best eaten fresh, she writes, “Red Currant is the icing on the cake of every tomato basket I create for family and friends: They look like cabochon rubies dangling from graceful stems.” Novogogoshary is a hollow, bell pepper shaped tomato best used for stuffing with crab, tuna, or pasta salad. Eva Purple Ball is a multi purposed, globe-shaped tomato reportedly brought from Germany in the late 1800s, and “so perfectly shaped that it could pass for a hybrid.” Novelty tomatoes are also included, such as Reisetomate (also known as Pocketbook), a cock’s comb red, ribbed variety with which Goldman once created a sensation on “The Martha Stewart Show” when she carried one as her purse on “handbag” day. “The tomato may not be as classic as Hermes, but it’s nonetheless a priceless heirloom,” she writes in Tomato.

Goldman hopes her books will seduce readers into growing heirlooms. Each book includes photographs by Victor Schrager in a style inspired by Dutch flower paintings and medieval illustrated manuscripts, and reproduced gorgeously in an oversized, full-color format. Along with photographs, The Heirloom Tomato includes a chapter on the cycle of germinating, growing, and storing your own heirloom seeds. “Tomatoes won’t save us from starvation but they are the crop most loved by gardeners and they are critical in cookery,” she says. All 200 tomatoes profiled thrive in the Hudson Valley (sources for all varities are listed) and there are 55 tomato-based recipes.


Goldman strolls along a herringbone-patterned path through fragrant oregano and thyme to inspect the isolation garden, framed by a white picket fence. Inside, black ground cloth covers the earth in a grid. Closing the gate behind her, she catches a bunch of columbine and geranium blooms in the door. She kicks the foliage out of the way and shorn petals scatter across the bricks. Goldman is unfazed. “I have no use for plants I can’t eat,” she says. Then she makes a beeline for the greenhouse. Tomato seedlings must be planted today.

Amy Goldman’s garden will be open for visits on August 16 as part of the Garden Conservancy’s Open Days Tour; at 6pm the same day, Goldman will read and sign The Heirloom Tomato at Oblong Books in Rhinebeck. On August 17, she will be at the Rhinebeck Farmers Market for a book signing from 10am to 2pm, with a tomato tasting (dependent on the harvest). www.rareforms.com. 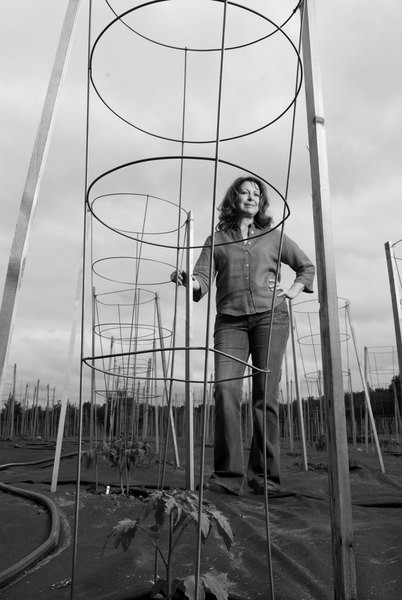 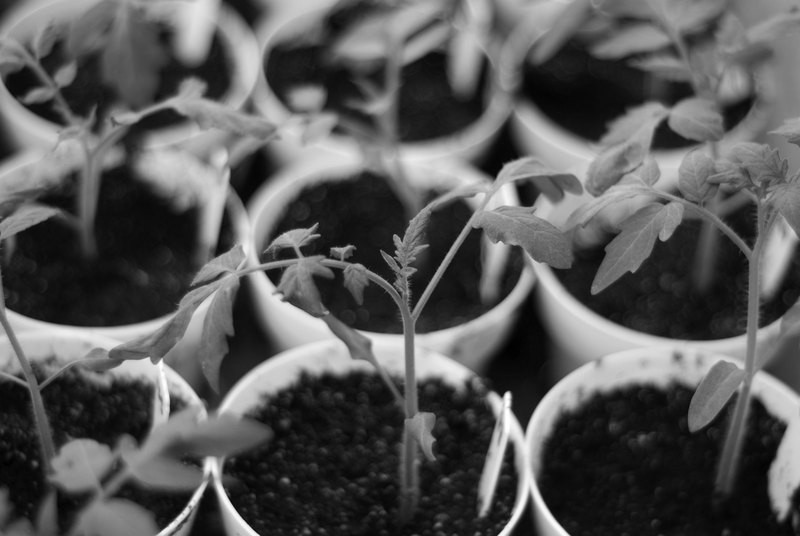