“Anonymous” at the Dorsky Museum 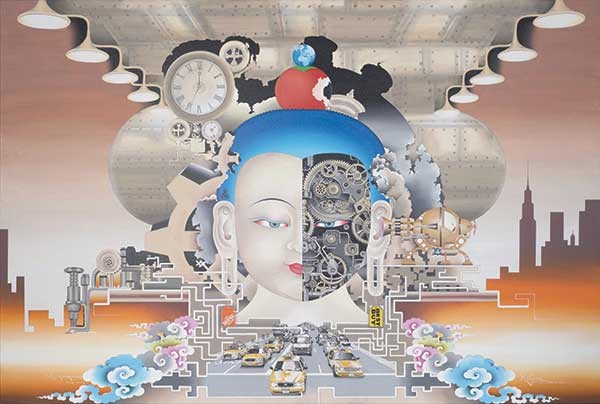 "Anonymous," on display at the Samuel Dorsky Museum of Art through December 15, is the first comprehensive exhibition of contemporary Tibetan art in the US. Featuring paintings, installations, photographs, and videos by 27 artists, some based in Lhasa, the show reveals a Tibetan art culture that has emerged only in the last decade. Emblems of consumerism and modern technology, the military-industrial complex, and pop culture are combined with traditional Buddhist imagery, illustrating the profound displacement, political disempowerment, and identity crisis experienced by Tibetan artists who are either living under Chinese rule in the Tibetan Autonomous Region or abroad. Many works are imbued with pathos, even as they express an irrepressible vitality.

The paintings especially appeal through their supreme beauty and delicacy of touch, reflecting the traditional thangka training of many of the artists. In Phurba Namgay's acrylic painting Dragon and Hummer, a writhing dragon confronts the vehicle floating amid arabesques of flower-like clouds. The dragon's contortions seem histrionic in contrast to the impenetrable, utterly banal Hummer; the message "bumps ahead" on a yellow traffic sign trivializes its raging force and hints at the collisions between religious tradition and consumer culture. Nortse's sculpture The Cans, in which metal cans are printed with images of people whose faces are obscured by thick bandages superimposed with Chinese script, refers to the commodification of the sacred: Each can contains yellow barley, a staple of the Tibetan diet that's used as an offering in Buddhist ceremonies. Gade's scroll-like photograph depicting a floating ice Buddha melting in a lake, with the Dalai Lama's former palace visible in the background, conveys transience with an ironic twist.

A number of works reference the self-immolation of Tibetan monks protesting Chinese rule, including Kesang Lamdark's pair of melted purple and orange plastic vests; Nortse's floor installation of monks' robes, each crumbled piece of fabric posed on a base of sand with an offering of Chinese money, a butter lamp, and Buddhist scriptures; and Tulku Jamyang's exquisite piece, Untitled, in which the enormous, transparent silhouette of a Buddha head, created by burning tiny holes in rice paper with an incense stick, reveals an underlying red Tibetan script consisting of the final, loving message of a monk who committed suicide.

Traditional Tibetan art, like medieval cathedrals, was made anonymously, in the service of religion, notes guest curator Rachel Perera Weingeist, senior advisor to the Shelley and Donald Rubin Foundation, based in Manhattan. (The foundation loaned many of the works in the show; the Rubins also founded the Rubin Museum of Art, dedicated to Tibetan art.) This tradition is in direct opposition to the individualism of contemporary art, she says. "One of the most important themes in the show is the artists' struggle using very traditional skills to distort, exaggerate, or reinvent traditional imagery," she notes. It's an art practice that "comes with a cost," given the disapproval it has spurred within traditional Tibetan art circles.

Contemporary Tibetan artists face other challenges. Those living within the Tibetan Autonomous Region are hampered by the restrictions imposed by the Chinese government. (To cite one example, the anonymous artists from Lhasa contributing videos to the show were unable to upload them via the Web nor send them by snail mail; instead, each had to be delivered by hand.) Some of the artists were trained in social realism at Chinese schools, following the Chinese crackdown on Tibetan art and religion in the 1960s and `70s. Sodhon's two Recollection cartoon paintings contrast his training as a youth by the Chinese Communist authorities and his Tibetan uncle in a colorful style that combines both stylistic traditions. Tsering Nyandak's Buddha Head, which depicts a severed stone Buddha head hoisted over a foreshortened, prone figure blowing up a red balloon, uses the didactic, myth-building vocabulary of social realism in a surrealist narrative about the destruction of Tibetan culture.

The viewer is challenged upon making this first encounter with contemporary Tibetan art to question her own assumptions (what catalog essayist David Elliott, a renowned European curator, calls "the disingenuous Western fantasy of a picturesque, closeted, mythical Tibetan culture that existed outside time and place"). The crisis of faith, culture, environment, peace, freedom, and identity chronicled in "Anonymous" is evidence of a vibrant cultural movement that serves to remove one's own blinders. "Though this exhibition examines the development of a visual language for Tibetan art, that search is in many ways universal, a startling mirror in which we may all see ourselves," writes Weinstein in the exhibition catalog.