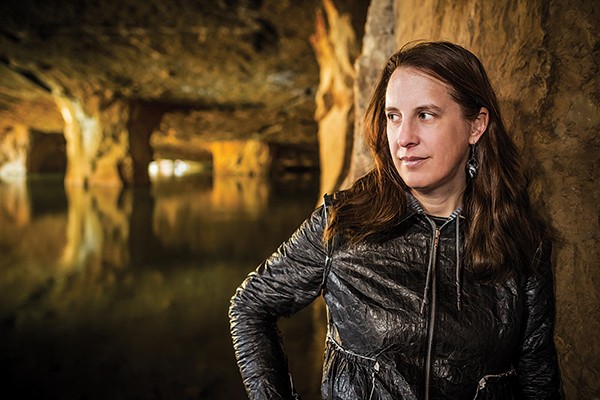 The front walk to Anne Gorrick's door has been reclaimed by flowers. As metaphors go, it's a bit obvious, but it does seem delightfully apt that you enter the poet's great rambling ship of a house from the side.

Gorrick opens the door in a loose-weave sweater and blue jeans, trying to corral an exuberant black lab named Einstein, more often called Tiny (he isn't). Her eyes are hyacinth blue, her smile infectious. After a high-exclamation point tour of the home she shares with husband Peter Genovese, she sits in the kitchen, popping up almost immediately to pour Cup of Joy chocolate-mint tea. The fragrant steam blends with the heady scent of home-tapped maple sap evaporating on the stove.

It's one of those Hudson Valley households: Wherever you look, something creative is happening. It might be a partially restored vintage rosewood piano, an antique barber chair, a glass-front cabinet of perfume ingredients next to a writing desk made from a motor-repair bench. There are framed prints on the walls (Cynthia Winika's as well as Gorrick's), work boots next to the woodstove. Two stacks of books line the table: Cassandra Danz's Mrs. Greenthumbs series ("kick-ass gardening books") and several volumes on Greek mythology.

One of Gorrick's new projects involves googling Greek gods and goddesses for pop culture and home product namesakes to plunder for poems. "There's an Aphrodite II double-wide mobile home," she exults. "I'm just entranced. I'm beside myself with how much fun this is."

Gorrick is a frequent flyer in cyberspace, often using the "terrible Internet translator" BabelFish to "pour text back and forth into about 20 different languages." The results are a springboard for high-diving poetics.

Does she worry about accessibility? "I think it's okay for people not to be interested in my work," she says. "There's a million other flavors out there." She's a fervent believer in "doing work to please your best, highest self instead of the marketplace;" her nine-to-five job as a college administrator pays the bills so her art doesn't have to.

Gorrick was born in Poughkeepsie. Her parents moved there from northeastern Pennsylvania when the local coal economy collapsed. Gorrick's father was hired by IBM (which ironically also collapsed); her mother taught science. Gorrick attended Spackenkill High School, where she played competitive tennis and studied classical piano. She describes her love of the arts as a "switched at birth" fluke in her science-prone family. "It was not a household with a lot of poetry books," she says drily.

The gateway drug was Sylvia Plath's Ariel, which she read in junior high. "I didn't even know what she was talking about, but it was so powerful," Gorrick recalls. "I didn't know you could do that with language. It gets into your skin like a scar." Then she discovered Tristan Tzara's Dada poems, which opened a door to experimental poetics. She pursued a traditional English degree at SUNY New Paltz, but had "the nagging sensation there must be something else." She found it in Clayton Eshleman's seminal periodical Sulfur: A Literary Tri-Annual of the Whole Art. "I thought, this is the community I want to be writing in."

It seems safe to say that she got her wish. Gorrick and poet Sam Truitt just edited In|Filtration: An Anthology of Innovative Poetry from the Hudson River Valley (Station Hill of Barrytown, 2015). Featuring 64 area poets and spanning nearly 400 pages, it's a mighty watershed of a book.

Even at a glance, it's clear we're not in Kansas anymore. The first offerings are three documentary poems by Mark Nowak, a photo-and-text excerpt from Carolee Schneemann "ABC—We Print Anything—In the Cards," and a 10-word poem by Sparrow; the last, L. S. Asekoff's "Yangshuo in a Drizzle," consists entirely of punctuation. There are poems written sideways, shaped into spirals, spaced across pages or printed in side-by-side columns. "Station Hill's Susan Quasha did a great job with the design—that's a lot of disparate work to fit under two covers," Gorrick says. In a preface, she and Truitt explain that they sought "poets whose work either shows originality of form or makes use of poetic conventions in new ways: old bottle/new wine; new bottle/old wine; and, sometimes, new bottle/new wine."

Gorrick met Truitt and then co-editor Deborah Poe at a Bernadette Mayer reading in New York. They invited her to collaborate, and when Poe became too busy to continue, Truitt and Gorrick pressed on, reading more than 1,500 pages of solicited work.

They knew where to look. For seven years, Gorrick ran the Cadmium Text reading series at R&F Handmade Paints; she now curates Dutchess County Community College's Process to Text series with Melanie Klein. Since 2009, she's been president of Century House Historical Society, which has hosted the Subterranean Poetry Festival in Rosendale's Widow Jane Mine (pictured at left)for 26 years. Truitt is executive director of Station Hill and a guest lecturer at Bard College, which boasts an astonishing roster of poets.

Though other anthologies feature Hudson Valley writers, both editors longed to reflect the fluctuant salt line of "the river that flows both ways" and mine the region's deep vein of radical artmaking; Gorrick cites the Maverick Concert Hall premiere of John Cage's 4'33". "That's a piece that is totally a vessel for anything," she says, noting that Cage's favorite performance of his "silent" opus included a deer running into the piece. "I'm enchanted by the fact that it happened here."

The editors worked well together. "If you're collaborating and there's a whole lot of yes, it tends to turn out well," notes Gorrick. One of many things they agreed on was alphabetizing by title rather than author. This randomly mixes well-known and lesser-known names, which Gorrick calls "democratizing. Michael Ives once accused me of 'juxtapositional fearlessness.' My favorite art is the art where I don't know what's going to happen next. I love that feeling of 'anything could happen.'"

Her interest in visual art blossomed about 20 years ago, when "I started realizing the limitation of 81/2 x 11 paper. This real estate is too small!" Her studio sits behind the house, past a rusting vintage schoolbus and Gorrick's labor-of-love installation, a figure-eight path lined with thousands of daffodil bulbs to make "a poetic yellow line through the woods. It's like the dumbest thing in America to try to do," she says. "Gardening is the world's slowest form of painting."

The outbuilding also houses the impressively tidy garage where Genovese builds and restores race cars. "It's like being married to Hephaestes," Gorrick says, leading the way though an anteroom, intricately tiled by her husband with linoleum racing flag patterns. The walls of her light-filled studio are lined with encaustic monotypes, made on a heat table Genovese built.

Together for 22 years, they've just returned from a trip to Arizona, New Mexico, and Big Bend. Though they're avid Catskill hikers, Gorrick is invigorated by the Southwest. "It's the un-Hudson Valley," she says. Aside from a "lost year" between high school and college, she's always lived near the river. "If you're going to live in one place, this is a great one."

Especially if you seek creative community. In|Filtration has hosted several multiauthor events, starting with a November launch party at Hudson's Time and Space Limited. There have also been readings in Saugerties, Brooklyn, and Poughkeepsie, with another planned at Sugar Loaf's Seligmann Center on April 10 (see below) and more to come, Gorrick says. "The poems in this book are currently ranging through various Hudson Valley counties. Cage free! Poem to table!"