Synergistic and Holistic, Urban Zen Integrative Therapy Is Bringing Care Back Into Healthcare 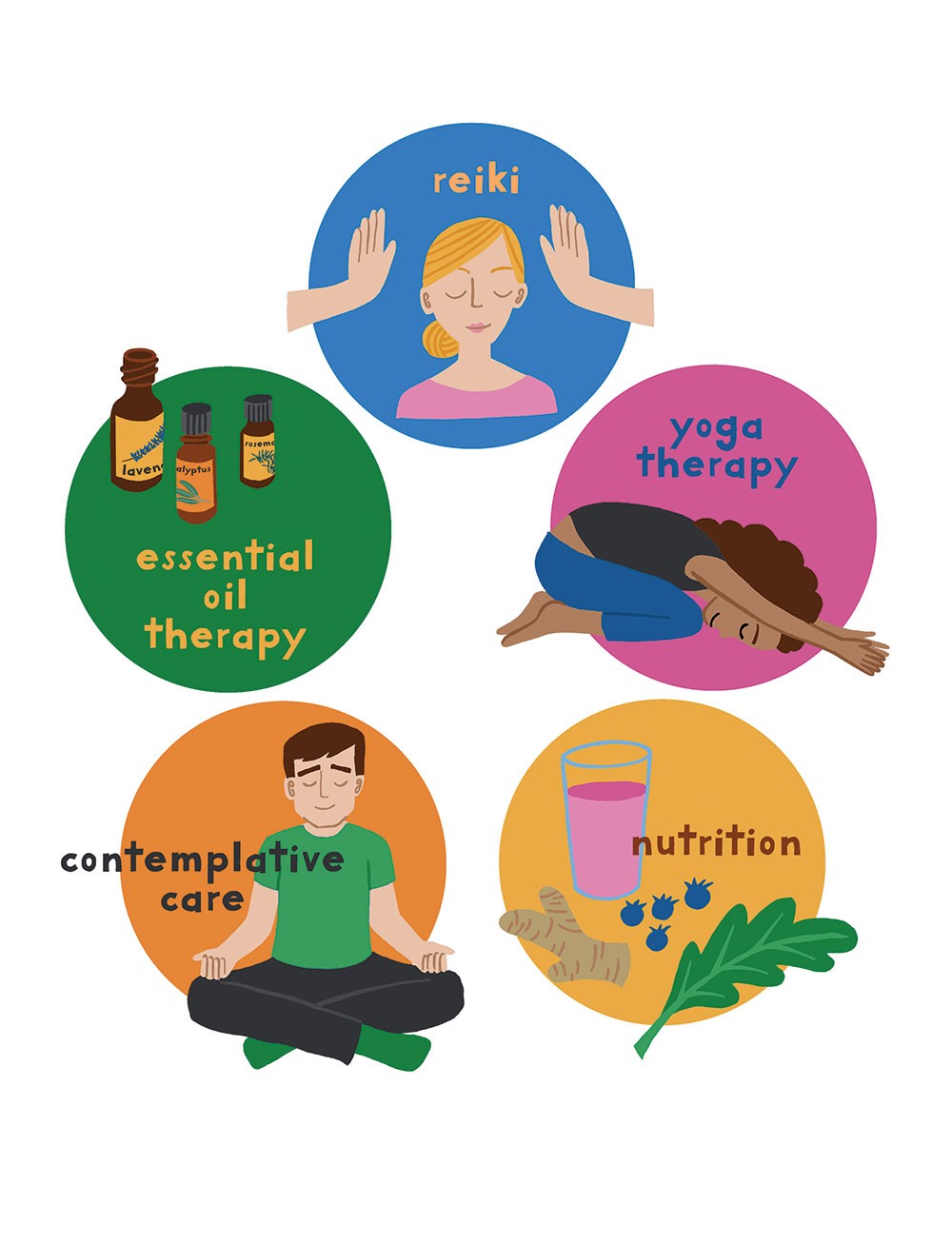 Harley Decker was 19 when his left lung collapsed and he was rushed to Southampton Hospital for emergency surgery in 2013. He had a condition called blebs, prevalent in tall, thin white males (Decker is 6'2"), in which microscopic air pockets form on the lining of the lung, where they can rupture and compromise the vital organ. The operation involved inserting a chest tube between two ribs and then "sandpapering" the tiny air pockets so that when they healed they would fuse to the chest cavity, preventing the lung from future collapse. It was not his first surgery, and in previous post-ops he had responded well to morphine. But not this time. "I was getting severe morphine sickness," he recalls, with three days of nausea, painful vomiting, migraines, and sleeplessness. His mother, Gina Decker, was by his side, helpless to relieve her son's suffering and not getting much sleep herself. When he had his chest tube removed on day four he felt no better—until yoga teacher Sarah Halweil came into the room and laid her hands on him with Urban Zen Integrative Therapy.

"I'm very open-minded to things like Reiki and Eastern medicine, but in the position that I was in, I didn't believe that anything would help," Harley says. Yet the moment he felt warm hands on his body, the effect was instant relief. "I watched in awe," remembers Gina, as Halweil administered the healing touch that helped her son breathe more deeply, transporting him into a deep and much-needed slumber. For about 30 minutes Halweil worked on him, from his head to his chest to his feet, and a smile came over the sleeping boy's face. "She finished by putting her hands in a heart shape over his chest area, and when she left the room I felt this profound sense of calm," says Gina, who watched her son sleep for three hours. As Harley awoke she leaned in close, like she was looking at a newborn. "How do you feel?" she asked softly. After four days of nothing but agony and agitation, his response was one word: "Great." "How is your headache?" she inquired. "Gone."

Much more than just hands-on touch, Urban Zen Integrative Therapy (UZIT) is a system of five healing modalities inspired by fashion designer Donna Karan and created by yoga teachers Rodney Yee and Colleen Saidman Yee. In 2001 Karan's husband, Stephen Weiss, was dying of lung cancer, and Karan got a close look at a healthcare system that was geared to treating a disease rather than a person—and that subjected doctors and nurses to burnout and fatigue. Eager to put more care into healthcare for both patients and caregivers, she turned to her yoga friends Rodney and Colleen to mastermind a solution. Launched in 2007, UZIT combines yoga therapy (including gentle movement, restorative poses, breath awareness, and meditation), Reiki, essential oil therapy, contemplative care, and nutrition-based wellness.

"The [healthcare environment] has become so sterile that the human care aspect of it leaks out of the equation," says Rodney Yee. "It's unfortunate because human touch and interaction are a big aspect of healing. Healing is not just fixing the physical body." With many hospital coordinators and CEOs realizing that patient satisfaction is important, there is a need for services that offer a more human experience. "We came up with the idea that we're not going to pretend to heal cancer or anything like that, but we're going to do what we do best—we're going to bring people into the present moment with our techniques," says Yee. "We're going to create as best we can the optimum environment so that the body and mind can do what they already want to do, and that is heal and balance." Each of UZIT's modalities is designed to address the symptoms of PANIC—pain, anxiety, nausea, insomnia, and constipation—as well as exhaustion and sadness. Practitioners are trained to draw from a toolbox of healing practices to address a wide range of scenarios for the patient or caregiver.

While Harley Decker experienced mainly touch healing, a typical UZIT session will combine and synchronize aspects of all five modalities. It's in this synergy that the magic happens and the power of each modality gets amplified. "At first I thought we should just use pranayama [breathwork]," says Yee. "When we started using five modalities, I was blown away. It wasn't just 1 plus 1 plus 1 plus 1. It was 1 plus 5 plus 5 plus 5." For someone experiencing anxiety, an UZIT practitioner might have the patient inhale an essential oil called Peace & Calming, and then put them into a Child's Pose. They might use Reiki hands on the lower back or feet to give a sense of grounding. Then the practitioner might talk the patient through a body awareness meditation. Later, the patient might get some nutritional guidance. "We also utilize something called bearing witness, from the Zen Buddhism community, which is listening deeply to the person you're with," says Yee. "So with PANIC we created a chart of things to do in a half-hour or hour session."