An Architect-Designed Studio in Ancram 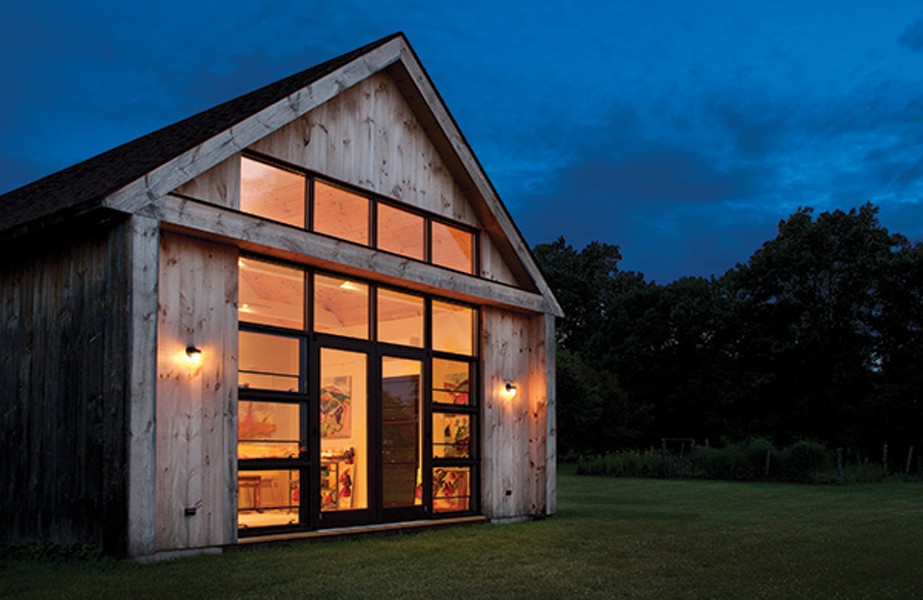 When painter Susan Roth elected to convert the tractor garage of her Craftsman-style 1987 farmhouse in Ancram into a 500-square-foot art studio, she decided to invest enough in the project to hire an architect.

Roth is a self-taught painter who used to work in the computer industry in New York. Since retiring in 2004, she has devoted herself to painting, and had a show in July at Manna Dew Café in Millerton, one of her favorite restaurants.

Roth and husband Matt Cohen, a retired attorney, bought their four-bedroom, two-and-one-half bath home in Ancram, located in the southeastern section of Columbia County, in 2000. With a population of about 1,500, and a location that's 20 miles from Hudson and 50 miles from Albany, Ancram's become a popular retreat for people who own second homes; Roth and Cohen also keep an apartment in Manhattan.

"I had been painting for years in a narrow breezeway off the kitchen," says Roth. "That space has large windows facing north, with a view of farmland plus mountains in the distance, so I had some idea of how I wanted the studio to be oriented. There, I could only see a sliver of the scarlet oak I planted in honor of my late mother; now, it takes center stage of the view from my new studio!"

One of Roth's friends had hired Millbrook-based Sloan Architects PC to renovate an old farmhouse in Milan, and recommended the husband-and-wife firm. So Roth contacted Michael Sloan, and although the project wasn't large, the architect, who has designed several visual arts centers, was excited about the opportunity to make the most of the view and light. Sloan said he also felt that he and Roth communicated well, and for that reason the studio project might be great for the firm's portfolio, to help attract future small-project clients who might otherwise hesitate to hire an architect.

Old Ancram, the Hoysradts, and Designing with Resale in Mind
"As soon as Susan showed me the space, I knew we could really do something great with the view," says Sloan. "But we did a lot more than just throw up a few casement windows and finish an empty shell. She really let us run with the design. She's an artist and respects that type of creativity in others."

The Roth-Cohen home sits on land that had belonged to the locally prominent Hoysradt family for 12 generations. It was built for Pat and Helen Hoysradt by their son, a local builder. The Hoysradt parcel dates to 1796 and the original farmhouse can be seen from the Roth-Cohen home on Poole Hill Road. The Hoysradts currently live in a house built on one of the last parcels of the family tract.

The town takes its name from the Livingston Homestead in Anchoram, Scotland; the aristocratic Livingston family was granted 160,000 acres in this part of the Hudson Valley by the English Crown in 1686, including the 27,000 acres that now comprise Ancram. The Hoysradt property was part of that grant. Ancram used to be called "Scotchtown" due to the large number of Scottish immigrants who relocated to the area in the 18th century. The town's metal forge made the huge chain stretched across the Hudson River near West Point to block British ships during the American Revolution.

"Coming from New York, I really appreciate being able to peek at the farm life here—people living off the land and eating local. There is a peacefulness to life here; the countryside totally inspires my work; people are genuine. We enjoy going to farmers' markets. When we dine out, it's Manna Dew or Nine in Millerton, or Red Devon, a farm-to-table market café in Bangall. And we love Hammertown, a home and lifestyle store in Pine Plains," says Roth. 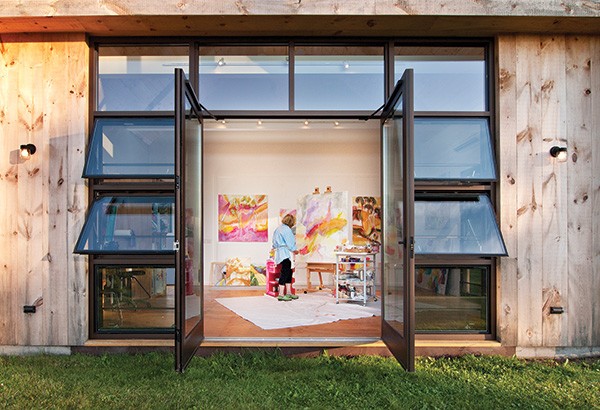 Sloan says that the project location in Ancram, with all its early-American nuance, appealed to him, too. "I'm descended from a family that has been in Millbrook since the 1700s," says Sloan. "A good architect can work with any style, but what you want to do with a contemporary addition like this is to create a space that, first of all, serves the client's needs, then looks right for the area in some way, and, finally, you also want to have designed something that makes sense for resale. Susan's art studio might someday be someone else's home office, or a music room. Attached but separate, there's no need to trudge through the snow to get to it in the winter, either."

The Details
Roth declined to say how much she spent on transforming the third garage bay into a first-class art studio, only adding that, due to unforeseen circumstances, the project went over budget. The studio was built by Reed Construction; some of the crew had constructed the main house 35 years earlier. "Without my husband's support, this would have never happened. He had a keen sensitivity to my need for a private workspace," says Roth. The couple traveled to northern India in 2011 and southern India in 2012, in part to provide Roth with inspiration for the vivid colors and fairly abstract shapes characterizing her most recent paintings. 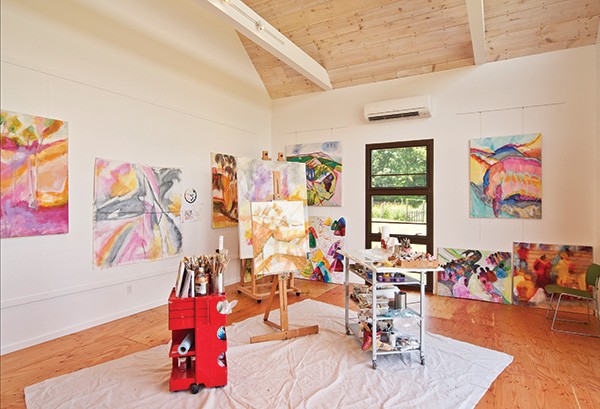 Sloan said that the architect's fee for a project like this would run about 10 percent of the total cost because it did not involve complex custom millwork or bespoke bronze hardware casting—common requests for his firm—which would push the design fee closer to 20 percent.

"We recommend clients familiarize themselves with our work, and also that of other architects, and perhaps get several proposals before committing. You want to make sure you and the architect are a good fit," says Sloan. "Similarly, good architects don't just draft a project and hand it over to the contractor; they keep track of the construction side of things, including making sure costs stay in line. In some instances, hiring an architect may actually save the client money."

The Roth studio features large aluminum storefront windows made by YKK AP America, Inc. The track lighting fixtures were manufactured by Lightolier. The floor is plywood, with a clear finish, so any paint spills won't be tragic. The cathedral ceiling is faced with pine boards. And to keep the room comfortable in all seasons, behind the neat façade is an abundance of sprayed foam insulation.

Roth and Sloan both stressed the importance of the cathedral ceiling to the overall style and functionality of the studio. "I like to work large, and the high ceiling gives me plenty of space to display works in progress, which is important to me because I typically work on several pieces at the same time," says Roth. 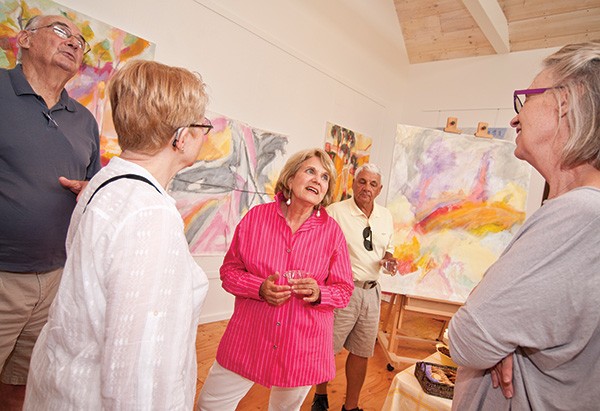 "The cathedral ceiling also enhances and softens the quality of the light entering the space," says Sloan. "That's why most visual arts centers have as much interior volume as possible, because when you have low ceilings and small windows, the light can be rather harsh, as opposed to diffuse. In Susan's studio, she can really see the colors with which she is working very clearly and accurately."