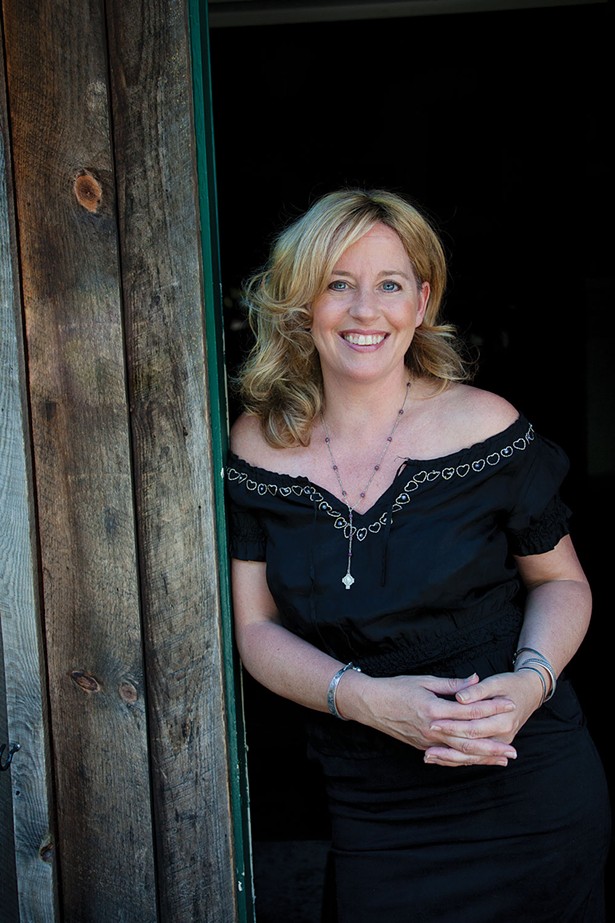 Woodstock-based musician Amy Helm has a lot in store this year, including the launch of a brand new music festival in Accord.

It's one of those crazy-hot Woodstock afternoons that happened last month. Amy Helm is sitting in the house her father built, chilling in the A/C and talking about her two sons, Lee, 10, and Hughie, 6.

"Lee's at that age where he's mortified to be seen with me. I have to drop him off down the street whenever I'm taking him somewhere to meet his friends," she says while smirking and rolling her eyes. "They both love to sing, though. I can tell they're both actually proud of what I do and proud of what their grandfather did."

Their grandfather—Amy's late dad—was, if you're not already aware, the legendary Levon Helm, known and loved the world over as the drummer and vocalist of the Band; her mother is the singer-songwriter Libby Titus, whose songs have been performed by Bonnie Raitt, Linda Ronstadt, and others. Amy's sophomore solo album, This Too Shall Light, which comes out in September, builds on the artful, introspective balladry of her mom and the deep blend of soulful blues fire, gospel harmonies, country grit, and elemental rock 'n' roll that her father so famously pioneered. But despite her having Levon's rich roots-rock blood coursing through her veins from conception and her singing along with him practically since before she could speak, it wasn't until later that the proto-Americana he was most recognized for—a style many would've seen as his daughter's birthright to carry on—actually hit home with her.

"I was 17 and my mom gave me a tape of [the Band's] Music from Big Pink, which, you know, of course I knew about, but I'd never really listened to before," she remembers. "And my breath was just totally taken away. I played that tape on my Walkman on the way to school every morning and I just became totally obsessed with it. It was the tonality of the music, what Garth Hudson was doing on the keyboards. And Richard Manuel's singing. Like everyone else, right away I wished I could sing like Richard, who'd just been kind of a curious memory of someone who'd been around during my childhood. I don't remember thinking, 'Wow, that's my dad playing!' I was able to listen to the Band's music without much association."

Amy Helm was born in Woodstock in 1970. Her parents parted when she was six, although their relationship remained amicable as Titus partnered first with Levon's good friend Dr. John and, eventually, Steely Dan's Donald Fagen (similarly, Amy and her ex, saxophonist Jay Collins, the father of their two sons, are still on good terms). "I remember being really little and my dad sitting at the piano with me and teaching me how to play 'The Tennessee Waltz'," says Amy. "And I remember riding in the car with my mom and singing along with her to 'Jolene' by Dolly Parton. When I was about five, my dad was on the road and my mom was also working a lot, so I spent a lot of time in Arkansas staying with my [paternal] grandmother. So, at first, the task sort of fell to her to teach me a lot of the old hymns and traditional songs."

Amy made her recording debut at age nine, alongside her mother on a track for a "Sesame Street" tribute album and in high school formed a vocal group, the Chilly Winds, that reflected her then hip-hop and contemporary-R&B leanings (Cameo, Run-DMC, and Lisa Lisa and Cult Jam were faves). Her further immersion in the Band's music opened her up to related sounds: Aretha Franklin, Otis Redding, Jimi Hendrix, Crosby, Stills & Nash, and, especially, classic gospel. It was the latter, and the soul-searching aftermath of 9/11, that led the young singer to her first musical project of note, the band Olabelle, which grew out of the weekly "Sunday School for Sinners" gospel sessions at Lower East Side bar 9C. "At the sessions, different people would get together and just pick hymns and songs to do—it didn't matter what anyone's faith actually was or if they even had one," she says. Things began happening quickly for Olabelle (named for folksinger Ola Belle Reed) once the lineup—Amy on vocals and mandolin ("I play it more like a guitar"); Glenn Patscha on keyboards and vocals; Fiona McBain on vocals and guitar; Tony Leone on drums and vocals; Jimi Zhivago on guitar and vocals; and future Levon Helm sideman Byron Issacs on bass and vocals—had congealed. "I think we'd only done about six gigs before we started making the first record."

Produced by T-Bone Burnett, Olabelle's self-titled, gospel harmony-soaked debut appeared to fervent praise in 2004; Zhivago left after its release, but the group, which still occasionally performs, has since waxed three more acclaimed albums: Riverside Battle Songs (2006), Before This Time (2009), and Neon Blue Bird (2011). Around the time that Olabelle was beginning its ascent, however, Amy's father was in a tough spot.

Suffering with throat cancer, Levon was unable to do the film and voiceover work needed to cover both the expensive treatments for the disease and the payments on "the Barn," his iconic home and studio. So, in 2004, taking a page from the freewheeling medicine shows of his Southern childhood, he turned the house into a music venue, hosting the now globally known, star-studded Midnight Ramble events that not only helped offset his medicals bills but continue to keep the mortgage wolves at bay. "A lot of people claim that they helped come up with the idea for the Ramble, but it was entirely my dad's vision," says Amy, who assisted in getting the sessions rolling and still performs at them regularly. "The lion's share of the money always goes to the musicians [performers have included Los Lobos, Elvis Costello, Dr. John, and Lake Street Dive, to name a few], and that's how he wanted it."

Levon's late-in-life career renaissance was inspirational for all to behold, and Amy was by his side for the whole ride, working with the rest of the crew behind the scenes at the Midnight Ramble; driving him to radiation treatments in New York; playing in his bands; coproducing his Grammy-winning comebacks Dirt Farmer (2007) and Electric Dirt (2009); and, ultimately, at his bed when he passed in 2012. Besides imploring her and the Ramble team to "keep it goin'," Levon also encouraged his initially reluctant daughter to step out on her own musically.

"I'd always been part of band before, and I think it's natural to feel this nervous pressure when you go into the same business that your parents are in and you're putting yourself out there under your own name," she says. "But he really wanted me to [become a solo artist] and he encouraged me. So did my peers. And that really helped me feel like I had a musical purpose: to make good music that pleases people."

She formed Amy Helm and the Handsome Strangers, whose lineup has included Byron Isaacs and Ida guitarist Daniel Littleton. Her solo debut, Didn't It Rain, which features her departed dad on several tracks as well as his guitarist Larry Campbell, the Band guitarist Jim Weider, organists John Medeski and Marco Benevento, and others, was released in 2015. The course of making it, though, wasn't exactly a smooth one; the songstress scrapped and re-recorded much of the music along the way. "It was the first time I was holding myself up as a solo performer, so there were some expectations around things," she explains. "I was lucky to have access to a studio [Levon Helm Studios] and to be able to work with players who are also my friends. I was still kind of on a learning curve then."

The making of This Too Shall Light, however, was a decidedly different process, and it's a stronger, more focused album for it. Recorded quickly and with a minimum of fuss with Grammy-winning producer and musician Joe Henry in Los Angeles, it has a looser, palpably spontaneous feel that fits its artist well. "Making this record felt liberating," Amy enthuses. "I'd already met Joe and I was a big fan of the productions he'd done for Bettye LaVette, Allen Toussaint, Susan Tedeschi, and other people, and I really wanted to work with him—when Larry Campbell and I were coproducing Dirt Farmer for my dad, we'd actually talked about having Joe mix it, but that didn't work out. So I was more than happy to surrender to his direction, and we did the new album totally live in the studio in four days, without belaboring anything. My band just threw our shit in the room and started playing, Joe set the compass from there, and it was amazing. I pulled in some songs we'd been doing, and he chose some really good ones for us to do, too."

Besides the reflective title track, which was written by MC Taylor of Hiss Golden Messenger and Josh Kaufman (Bob Weir, Josh Ritter), This Too Shall Light's standout cuts include covers of the Milk Carton Kids' "Michigan" and, interestingly, "The Stones That I Throw (Will Free All Men)," a lost, gospel-tinged single recorded in 1965 by Levon and the Hawks during the brief period between their leaving rockabilly singer Ronnie Hawkins and hooking up with Bob Dylan en route to becoming the Band. "I've always really loved the whole vibe of that song," Amy says. "It's just a great, straight-up rock 'n' roll dance tune."

This month, as she prepares for the launch of a new album and a tour to support it, the busy mom and musician—with the help of a trusty troupe of organizers—is launching yet another artistic venture: the Dirt Farmer Festival, a local, Ramble-sanctioned annual live music event. "We're really excited," she says about the festival's debut. "My dad always wanted to create a music festival, so it's something I've been wanting to do for a long time. Plus, it's right in the neighborhood and the lineup is really great." Indeed: Among others, the affair's debut roster features Jackson Browne, William Bell, and others backed by the Midnight Ramble Band; Larry Campbell and Teresa Williams; Hiss Golden Messenger; Terry Reid; the National Reserve; Gail Ann Dorsey; and, naturally, Amy herself.

Besides those mentioned above, another of This Too Shall Light's shining moments is an acapella rendition of "Gloryland," a Southern hymn passed down to the singer by her father, who learned it from antiquity via his parents. With Amy joined around the mic by fellow singers Allison Russell, Doyle Bramhall II, and Adam Minkoff, the unadorned performance is at once humbling, beautiful, soothing, and uplifting. But traditional tunes, it seems, aren't the only treasures that continue to be handed down in the Helm household. Amy's oldest boy has been showing signs of his own yearning for the stage and the road.

"Lee loves playing his guitar," says his mother. "I can already tell he's destined to be in a band, riding around in a van."

The inaugural Dirt Farmer Festival will take place at Arrowood Farms in Accord on August 19. This Too Shall Light is out September 21 on Yep Roc Records.

Album Review: Amy Helm | What the Flood Leaves Behind

3 Upcoming Concerts at Arrowood to Round Out Your Summer Sponsored