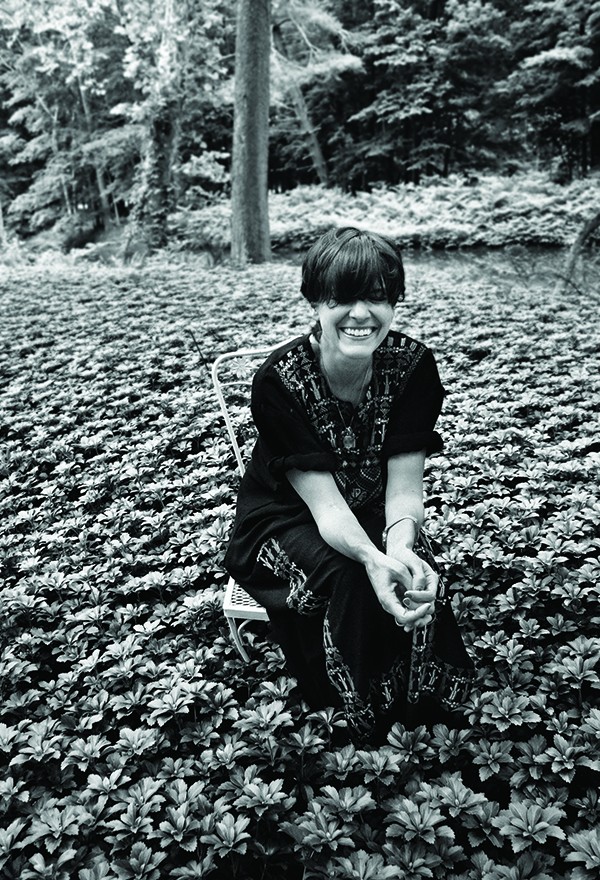 Singer-songwriter Ambrosia Parsley may be best known for the spooky noir of her old band Shivaree's 1999 hit "Goodnight Moon." And her solo debut, the Brechtian pop outing Weeping Cherry, just released in the US on Barbes Records, may have been fueled by periods of profound sadness and may be, according to her, "basically conversations with dead people." But lest anyone get the idea she's some kind of fatalistic bummer-goth diva, Parsley insists that for her the act of creating music has been increasingly—dare she say it—fun.

"I've never had so much fun making a record," she says. "Making this one was full of moments when [she and her collaborators] were really 'talking' to each other as musicians. But even though I try to play in the light more and more, I'm still constantly drawn to what's under the bed."

And when it comes to her family background, there's some pretty dramatic stuff under that bed. Parsley's grandfather, a coal miner and union organizer, moved the clan from their generations-long West Virginia home to the Los Angeles area after learning his immediate future wasn't looking so good. "He skipped out on a hit," Parsley says. "He was at a company picnic and someone there told him he was going to be killed. So he took the hint and went out to California. He found a place in Reseda, which became like a teeny-tiny West Virginia after my five uncles and all of their families followed him and his family out there. Which was where he lived out his life—until the black lung finally got him." Around Parsley's childhood house there was music, mostly country, in line with the family's Appalachian roots, which was played via eight-track tapes: Dolly Parton, George Jones, Bobby Goldsboro. "I loved [Goldsboro's] 'Honey,'" the singer recalls. "But I also loved Kiss and my mom's Pointer Sisters albums. My dad's brothers all sang and played shitty guitar—like I do," Parsley says with a laugh.

Although she "always sang and wrote songs, for as far back as I can remember," the internationally charting Shivaree would actually be her first band. "Everything happened really fast with that," she explains. "I met [keyboardist] Danny McGough at a party in 1997 and [guitarist] Duke McVinnie just happened to be crashing on Danny's couch at the time. We wrote three songs together right away and suddenly we had a band. But, really, Shivaree was always more of a collective than a band per se, with members coming and going and different people playing on different songs on the records." The nucleus of the project moved to New York upon signing with Capitol for 1999's fantastically titled I Oughtta Give You a Shot in the Head for Making Me Live in This Dump. Among the set's smoky, twangy, sexy tracks was "Goodnight Moon," which got picked up for use in an Italian watch commercial, leading to platinum sales of the disc there and gold sales in France and Portugal. "[The song] got really big in Italy, so we went over there to play," Parsley says. "The audience expected us to do exactly what was on the album, and they seemed to be pretty confused, because we when got [on stage] Duke turned his ring modulator on and we and started doing all of this weird, freaky stuff. They didn't like that. [Laughs.] But then we played 'Goodnight Moon' and suddenly everything was okay." The act went on to accrue a healthy following in the "wine-drinking" countries of Europe during the early '00s, although at the time it didn't seem there were many radio programmers listening back in the States.

Among those in the US who were listening, however, were several high-powered TV and film producers. "Goodnight Moon" made its way into the series "Dawson's Creek" and was tapped by Quentin Tarantino for 2004's Kill Bill: Volume 2 (a re-recorded version of the song would appear in 2012's massively grossing Silver Linings Playbook). In 2004, Parsley took a yearlong gig on Air America radio's "Unfiltered," a show hosted by Rachel Maddow, Public Enemy's Chuck D, and Parsley's friend, comedian Lizz Winstead. The segment, sometimes live and sometimes recorded, was called "Ambrosia Sings the News" and ran for nearly 50 episodes. "It was crazy and a lot of fun," she says. "My husband and I would get all the newspapers, go to a coffee shop, and I'd write [the songs] up. It was the Bush years and there was no shortage of material—and it all happened to rhyme." By Shivaree's fourth album, 2007's Tainted Love: Mating Calls and Fight Songs (Zoe Records), a collection of tunes connected with socially and sexually abusive artists (Phil Spector, Rick James, Ike Turner, others) and recorded while the front woman was pregnant with her son Lucius, the band was feeling like it had run its course. "The records were coming few and far between, bolts would fall off and need to be replaced," says Parsley, alluding to the group's constant lineup changes. "I hated being in videos—I'd much rather play Scrabble with my bandmates. Plus, yeah, it took me a minute to adjust to my new life as a mother."

So she pulled the plug on the Shivaree name, settled into being a mom, and even got a barber's license. She, Lucius, and her spouse, who works in music publishing, continued to commute between their New York apartment and Phoenicia house. "Our first [local] place was in Willow," says Parsley, who has since sung on projects by Mocean Worker, TV on the Radio's David Sitek, and others. "It was the golden days, when record companies were throwing money around, so we had a little bit to put down—before real estate prices got crazy up here, like they are now." Still, she never stopped writing and working on her own music, getting together regularly to record with McGough and two of their former Shivaree co-conspirators, multi-instrumentalists Chris Maxwell and Phil Hernandez. As the music production duo the Elegant Too, Maxwell and Hernandez have worked with such clients as Yoko Ono, Ray Davies, They Might Be Giants, John Cale, and various film, commercial, and television concerns.

"Ambrosia's vision as an artist is really unique, I think," says Maxwell, who relocated to West Saugerties in 1998 after Parsley introduced him to the area. "She comes at it from more of a literary angle, rather than just being a straight songwriter. Her songs are these cool little stories." It's 11 such stories that form Weeping Cherry, which was supported by a successful PledgeMusic campaign and released in France in 2013. Many of the tales are bittersweet, given that the year of the album's making was fraught with the losses of several family members and friends, including ex-Shivaree drummer George Javori, whose funeral at sea is vividly memorialized in the poignant "Catalina." For Parsley, an exacting writer known for taking lengths of time to work out her songs, the release brought with it a breakthrough in the form of "Rubble," a track that was created in-the-moment with the record button on. "Usually, we work until things feel like they aren't moving anywhere and then we quit for the day," she remembers. "But with that song Chris and Phil saw a germ of something happening there and pushed me to keep going, even though I felt like I didn't have any ideas left. But it turned out great, and it made me braver and less worried about always having something already prepared when I go into the studio."

"[Parsley's] voice has a really special sound," says singer-songwriter Joan Wasser aka Joan As Policewoman, who, like AA Bondy (Verbena) and Marc Anthony Thompson (Chocolate Genius), appears as a guest player on Weeping Cherry. "It's not about being a powerhouse; it's more nuanced. The sounds and arrangements that Chris and Phil came up with for the record are amazing. I tend to appreciate anyone doing anything really well while using a classic sound, and Ambrosia just writes such well-crafted songs."

"With this album I just wanted to make something really pretty," says Parsley. "But, more than anything, I want people to think about the dead friends I'm singing about. That's what makes them present for me. It's what makes them live again."

Ambrosia Parsley will begin a monthly residency at Rockwood Music Hall in New York on September 16. Weeping Cherry is out now on Barbes Records. Facebook.com/AmbrosiaParsley.