All in the Family | Comedy | Hudson Valley | Chronogram Magazine

All in the Family 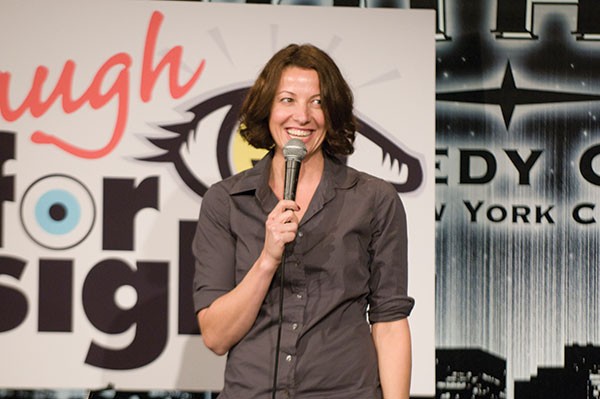 McFarlane and Vos were actually established stand-up comedians before they met on the set of "Last Comic Standing," on which Vos was a judge and McFarlane was competing in its second season. The couple is most well known for their "cocumentary" (comedic documentary) Women Aren't Funny, and their SiriusXM radio show "My Wife Hates Me," recorded live every Tuesday night.

"The podcast is just if you enjoy marital squabbles—it's really real. Neither one of us can control our emotions," McFarlane explains. "We finish the podcast, and then I'm in a hot shower, crying."

That playful banter has become a trademark for the couple. It's hard to draw the line between comedic performance and those "marital squabbles" that occur during their podcast, but that's what makes their act both relatable and hilarious. "Even though we both talk about marriage or whatever, we don't really do, like, 'Ladies, he's like this,'" McFarlane says. They manage to bounce jokes off of each other while making their material their own.

Like any married couple, they have different personalities, and as a result, different comedic styles. "Rich is a lot more honest about everything—there's nothing off limits to him. I try to stay away from money, religion, race," McFarlane says.

As an afterthought, she adds, "Could you just write that I wrote most of Rich's act?" In fact, all of Rich's jokes that the audience will enjoy, McFarlane confirms, she wrote.

The couple have a seven-year-old daughter together named Rayna with a funny bone of her own. When Vos was assigned to write some of the jokes for the recent Justin Bieber roast, she had a suggestion: The national animal of Canada? Justin Beaver. "She gets humor on a level that some comedians don't even," McFarlane says.

Rayna's also written jokes for her mom, though McFarlane can't use this particular one due to the staging difficulties: She rolls up in a wheelchair and leg brace, leans into the mike, and says, "You should feel bad for me. I'm married."

"She'll probably get worse as she gets older," McFarlane reflects. "She'll be a horrible hack. It'll be, like, 'You peaked at seven!'"

In Women Aren't Funny, Rayna is often seen pleading to go on stage. The film puts an amusing spin on an alarming issue: the lack of women in stand-up comedy, and the resulting stigma associated with female comics. Reigning funny women Wanda Sykes, Rosie O'Donnell, Sarah Silverman, the late Joan Rivers, and McFarlane herself offer their firsthand perspectives on performing as women on a primarily masculine stage.

"We hope that people who liked the documentary will come see us...but I probably won't be doing that material [in Sugarloaf]," she says.

Instead, she and Vos are going with a classic stand-up strategy: picking people out of the audience and bullying them. "It's a little bit like what might happen in a Greek coliseum. But people who are fans of me and Rich know, it's a little mean—there will be language. And we're both convicted pedophiles."