All Downhill From Here: Hudson Valley Ski Resort Updates for the 2020 Season 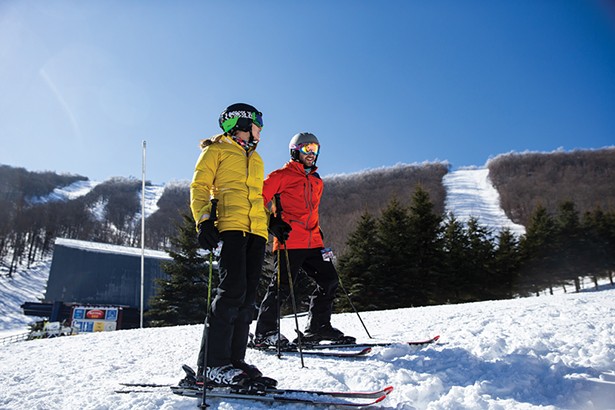 Winter weather may be more volatile than ever, but at New York's myriad ski areas by now the lifts are turning, snowmaking operations are cranking away, and mountaingoers from novice to expert are gliding downhill.

But these places don't look exactly the same as last year. Millions of dollars have been invested in infrastructure improvements, new accommodations, revamped dining options, and experience upgrades. New York is a better place to ski than ever. To get you up to date for the 2019-20 ski season, here is our guide to what's new on the slopes since last year. Consider it our service to you.

After tricking out its terrain parks last season, Belleayre Mountain has loads of improvements for the 2019-20 season, says sales coordinator Selina Guendel. The big one is the expanded, modernized Discovery Lodge, the resort's Scandinavian-camp-style convening place. There are now more seats in the cafeteria and lounge areas, with floor-to-ceiling windows that look out at the slopes; an expanded kids section; and a new patio with an outdoor ticketing area. The $14.6-million update was overseen by the Pike Company, a Rochester-based builder founded in 1873. 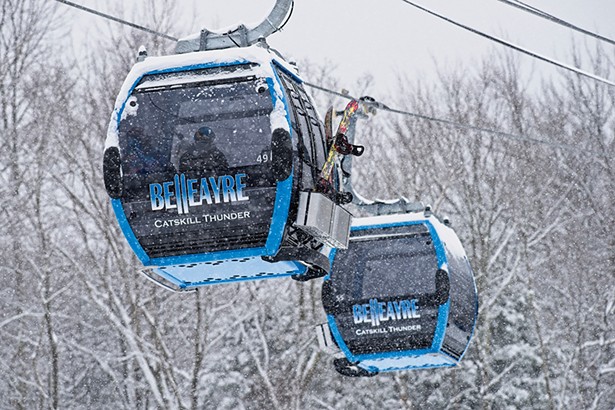 Belleayre also relocated its entire learning area to a centralized location and installed a new quad chairlift to deliver skiers and snowboarders to its beginner slopes. The lift has a loading carpet at the bottom, to make the switch from riding carpets in the learning area easier.

Lastly, the ticketing system got a major update this year: All of the gates now have radio-frequency-identifying (RFID) ticket readers, which means guests don't have to remove their tickets to be scanned at the lift gate. That'll mean faster lines and fewer worries about losing tickets. "You simply move through the gate as it reads your ticket," Guendel says. "We like to say our guests are now like an EZ Pass."

The retro, laid-back Catamount is one of only three ski areas in the country to straddle multiple states (New York and Massachusetts), and this year it's added even more terrain: There are five new trails with snowmaking opening for the 2019-20 season, and 100 new snow guns in the park overall. The mountain now has 40 trails with snowmaking, 130 skiable acres, eight lifts, and a famed double black diamond trail (aptly named Catapult) with a 1,000-foot vertical drop.

One of the more upscale resorts in the Catskills, Windham has invested more than $12 million into park and guest experience improvements over the past two years, and the results are being unveiled this season.


Operational updates include fully automated snowmaking on the park's signature top-to-bottom runs (Upper and Lower Whistler); a booster pump house for the East Peak and new piping to increase snowmaking efficiency; upgraded lifts out of the base area, bringing Windham's uphill capacity to more than 22,000 passengers per hour; and a new PistenBully snow groomer.

Lodging and dining options have also been improved. The new "European-inspired" Umbrella Bar is the centerpiece of the base patio area, with 360-degree views of the landscape. (A second new building in the patio area houses a ski simulator that offers guests the chance to virtually ski downhill race venues from around the world.) And the Winwood Inn, a quaint lodge operated by the resort in the town of Windham, has renovated rooms and a new restaurant serving classic American comfort cuisine.

Scrappy Plattekill, independently owned and operated by the Vatjay family for more than 25 years, offers a broadly appealing, family-friendly atmosphere out in the northwestern Catskills. New features for 2019-20 include a new carpet lift in the snowtubing park; upgrades to snowmaking operations; renovations to the base lodge, including totally revamped food service; and a new Junior Alpine Race program, for the kiddos. That program joins a cadre of ski and snowboard packages that appeal to a wide variety of riders, from private lessons to programs like "Return to the Snow" (if it's been years since you hit the slopes) and "Never Ever" (if you're not sure what you're even doing on a mountain).

This season is the 60th for Hunter, and the popular resort is marking the anniversary with special giveaways and events throughout the winter. The birthday bash on January 11 is particularly of note—there will be prizes, live music, a DJ, and throwback ski wear.

This season, Mount Peter is debuting an all-new instructional ski and snowboard area called Valley View, serviced by a carpet lift. The hill is meant to complement the park's popular Basin Learning Area, which is for beginners; one step up in difficulty, Valley View is for skiers and riders who have the basics down but aren't quite ready for the lifts.


Well-known for being supportive of novices, Mount Peter will also continue to offer free beginner ski and snowboard lessons (with the purchase of a lift ticket) on all weekends and holidays. "We're known as New York's 'family mountain,'" says Justin Cooper, Mount Peter's marketing manager. "We strive to be a fun, friendly area to spend the day without any pressure and people blazing down the hill past you."