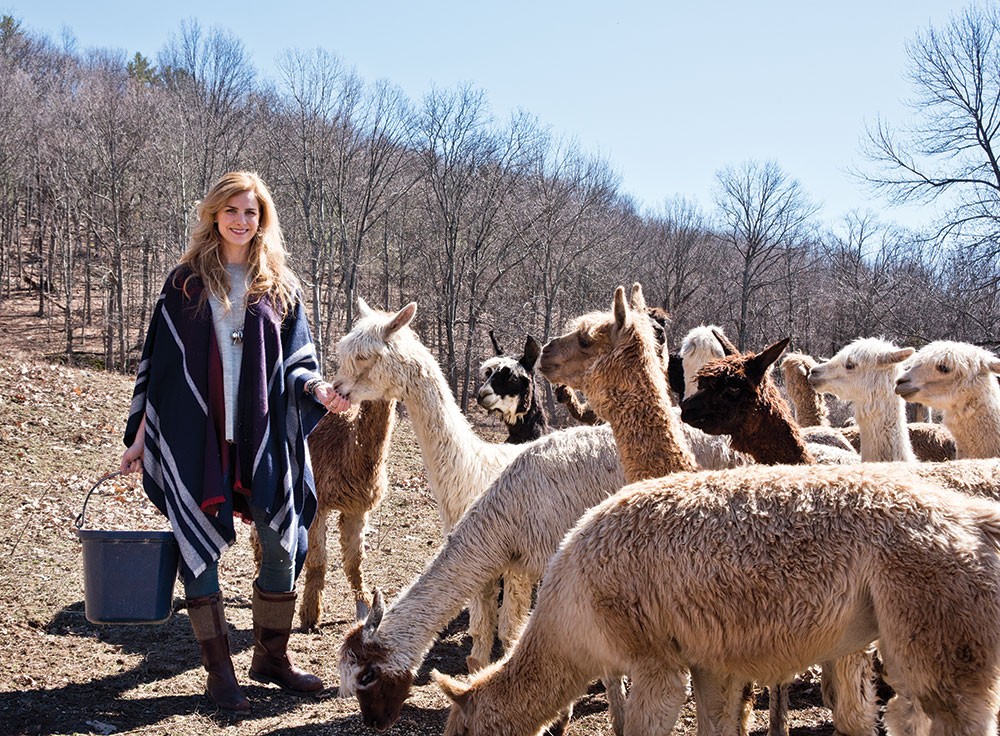 Alpaca fur is usually thick and scratchy, and warm enough to withstand an Andean winter, but the yarn spun from Alicia and Daniel Adams's alpaca herd is soft enough to be mistaken for cashmere.

The yarn is woven into blankets, capes, sweaters, and pillows for their clothing and homeware line, Alicia Adams Alpaca. All of it is based out of their 80-acre farm, where the couple live, work, and care for the herd of alpacas that have become almost like extended family. Like their line of clothing and housewares, the couple's background is a bit of Old World charm mixed with new world ingredients. Both are half German, and grew up in the Americas and Europe. Daniel is half American and spent part of his childhood on the East Coast; Alicia is half Mexican and lived in both Mexico and Germany as a child. However, since their arrival 11 years ago, they and their alpacas have woven themselves seamlessly into the fabric of the Hudson Valley.

That's Not a Kangaroo

True to the international nature of this brood, the Adamses came to alpaca farming through a rather circuitous route. They were living outside of Munich with two preschool-age children (and another on the way) where they had just finished renovating a large farmhouse. Daniel, one of the co-founders and the CFO of Design Hotels, a boutique hotel marketing and support services company, had taken that business public and then sold it. Alicia had left her career in marketing to focus on raising their family. (A fourth daughter was born later in the Hudson Valley.) "It was nice," Alicia recalls, "but a little bit boring." Both were ready for a new challenge. "We wanted an adventure"—but one that allowed for their growing family.


Daniel thought a winery might provide both the challenge and work-life balance they were seeking. A lover of all things Australian, he went to investigate vineyards in the burgeoning wine region just north of Sydney. In Mudgee, New South Wales, after a day of research, he returned to his B&B for the evening to relax. Out on the veranda, sharing a bottle of wine with the B&B's English owners, he noticed some unusual animals in the distance. "Those aren't kangaroos," he commented. The owners replied, "No, they're alpacas." Daniel was fascinated. In the morning, he called his wife. "Forget the wine, we can buy wine," he remembers saying. "Let's breed alpacas."

He started doing research and contacting American alpaca breeders. Like their relative the llama, alpacas are native to South America, but smaller, docile, and bred to produce masses of warm fur. Both Daniel and Alicia have always loved animals and were attracted to the fact that breeding the creatures and harvesting their fur wouldn't involve any cruelty to the creatures. Alpacas are also a sustainable animal to keep. Unlike goats bred for cashmere, their feet are padded, allowing them to walk gently on the earth, and they only nibble the tops of grass, rather than pulling it up by the roots. ("If you want a good lawnmower," Alicia says, "just get an alpaca.")

With their children still in preschool, the couple realized they had a window of opportunity. They sold their farm in Germany and decided to move to the US. (Australia was just too far from their extended family.) Friends suggested the Millbrook area for its European feel and proximity to New York city. They made their move.

They began on a rented deer farm with 15 alpacas for breeding. "It was really learning by doing," Alicia says. No one in the area had experience with the breed and the couple did all the birthing themselves. (Alpacas commonly have one baby a year, called a cria.) As they learned the ropes, they found they loved farm life, as well as the mixed community they found in the Hudson Valley. While locals were initially skeptical of their operation ("this is horse country," Alicia notes) they soon saw the alpaca's appeal. Pine Plains veterinarians Barbara Clayton and Bernardo Mongil even underwent specialized training to assist the Adamses in their operation. 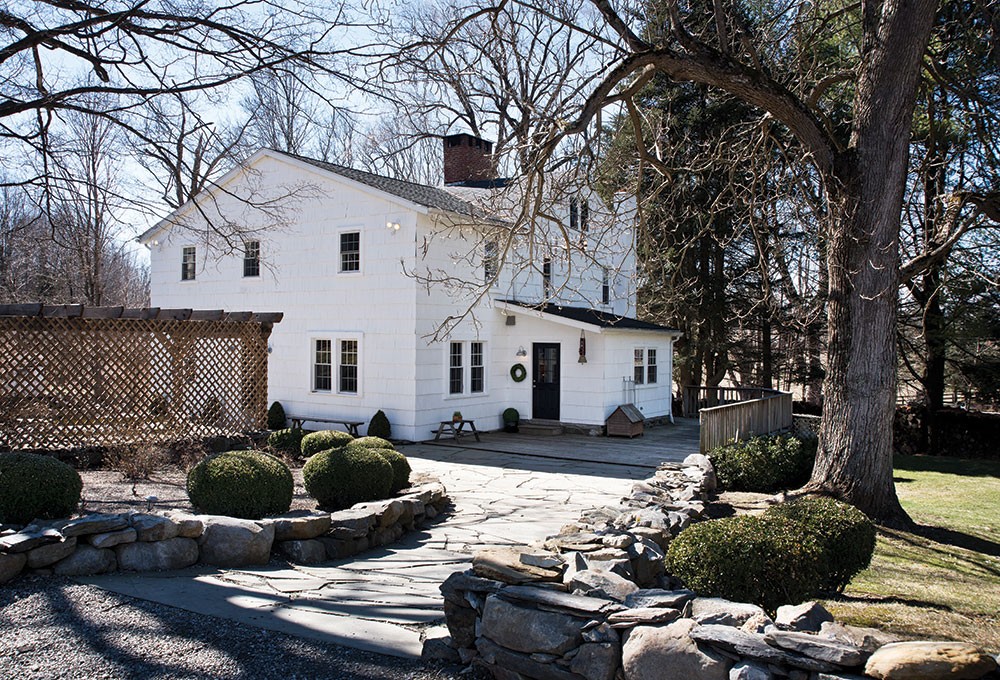 In 2008, the couple bought their current six-bedroom, three-bath farmhouse on 10 acres of land. They also purchased an adjacent 67 acres for their growing herd. The two properties, which together were once a farmstead dating from the 1780s, were reunified and reborn as a modern alpaca farm. However, the 4,800-square-foot farmhouse, as well as the surrounding landscape, required a complete overhaul to become the picturesque, working farmstead they are today.

The first floor was built around a large central fireplace. Three mantles—one facing the living room, one the kitchen, and another a breakfast nook—all share the same flue. In the living room, the couple pulled up linoleum to reveal the original wide-plank wood floors. They gutted the kitchen and replaced it with a white, ultra modern island and cabinetry. Then they knocked out a wall, expanding the space to include a breakfast nook. An open porch was converted into an extended mud room for the family. A covered porch was closed in and incorporated into the first floor layout: It's now an informal family room. 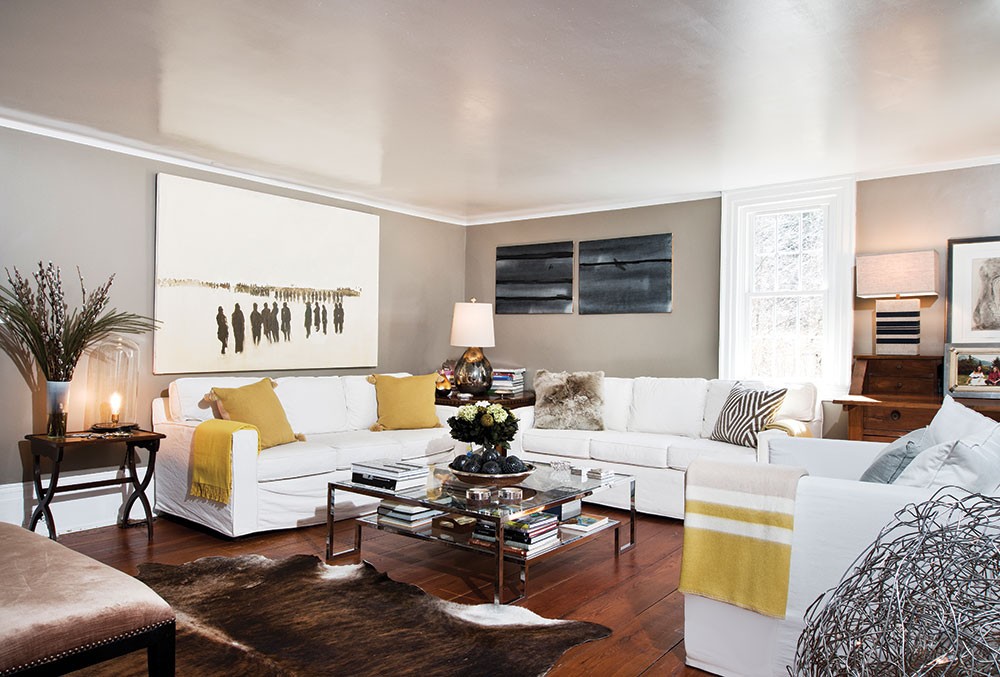 Upstairs, they removed another wall to create an enlarged landing. Three of the original farmhouse bedrooms suit their youngest children perfectly, and they converted the attic into a bedroom for their oldest daughter. A master suite was added for the adults. Outside, they cleared the land of fallen trees and stone, using the raw materials to create a stacked log fence and stone patios.

In 2009, with a thriving alpaca herd and children happily enrolled in local schools, Alicia found that she once again needed a new adventure. Sheared once a year ("it's always around Cinco De Mayo," Alicia notes, "and we try to make a party of it"), alpacas produce hair of varied length and thickness and in a range of 22 shades. While Alicia had no previous experience with knitting or sewing, she had a love of design and practicality. She also had an idea to create something soft and sustainable. 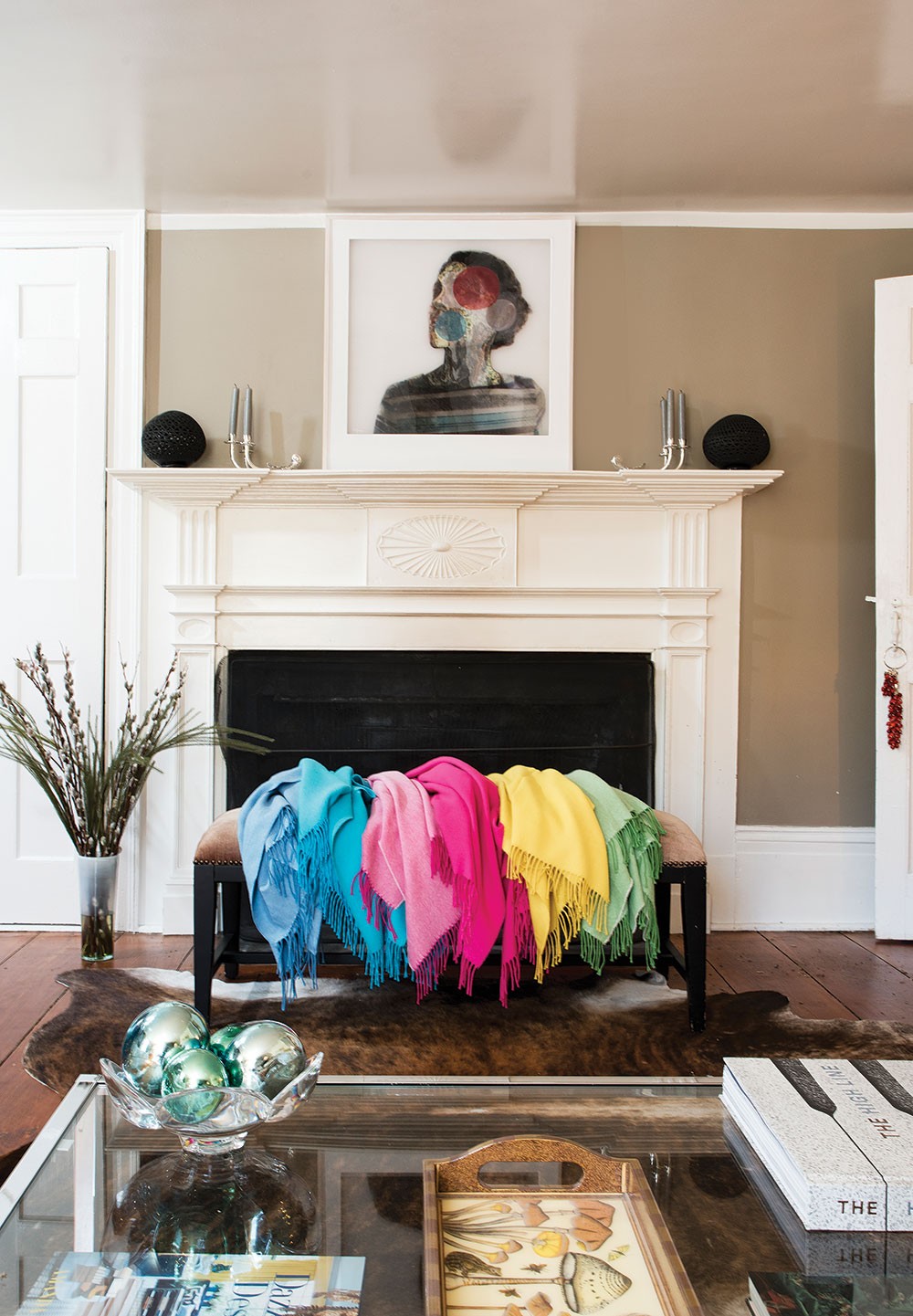 "When people think of alpaca, they thick of the thick, scratchy fur," Alicia explains. "But, like other fiber animals, alpacas have a layer of coarse guard hair; underneath, their fur is soft." By separating out the guard hair (she now uses a machine to do this) she was able to make a set of plush baby booties and a hat. She took the raw fiber and her sample products to local mills and artisans, as well as the Hudson Valley Sheep and Wool Festival, learning whatever she could and looking for someone to transform the raw material into yarn with the warmth of an alpaca sweater and the luxurious feel of cashmere. 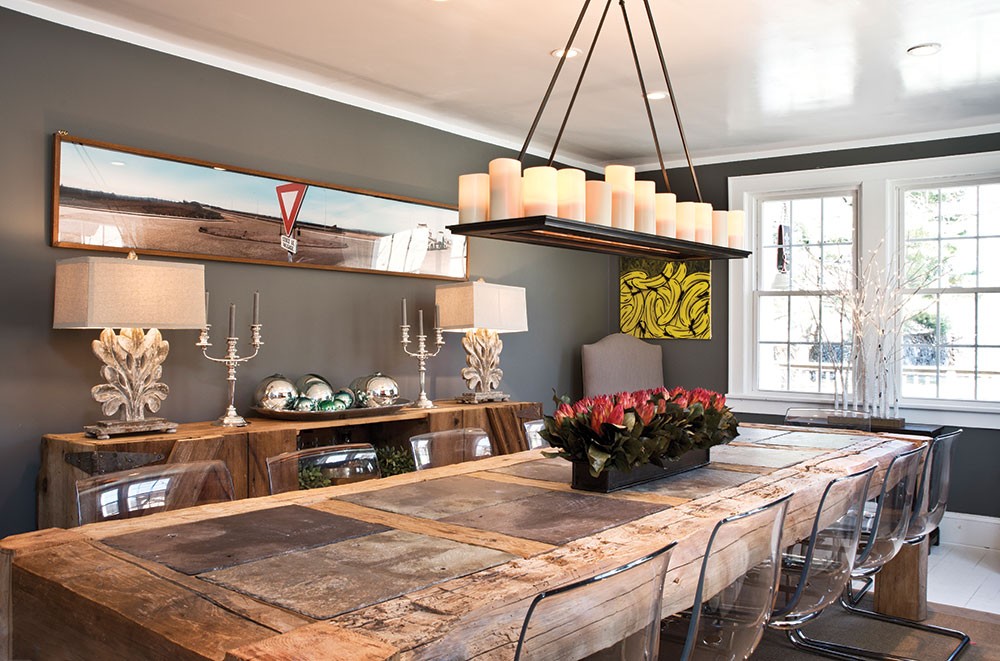 Just as with her husband's trip to Australia, it took a trip overseas to provide the final necessary ingredient. She travelled to Peru, where she found artisan weavers able to create the silky, supple fabric she'd envisioned. (She also developed a love for Peru to rival her husband's love of Australia.) Sold through her flagship store in Millbrook, the Alicia Adams Alpaca line also has boutiques in Aspen and Malibu, and is sold through other retailers and online.

However, the heart of the operation still lies with the animals sharing their farmstead. Outside the house, three ponds and a babbling brook lead to a newly built 2,400-square-foot barn. Used for equipment and photo shoots for her retail line, it also serves as housing for the animals in the winter. The guileless, curious alpacas, now 65 in number, come to inspect anyone she brings to visit. Adams speaks to the animals in German, and they hum in reply. She explains, "Alpacas hum when they're content."