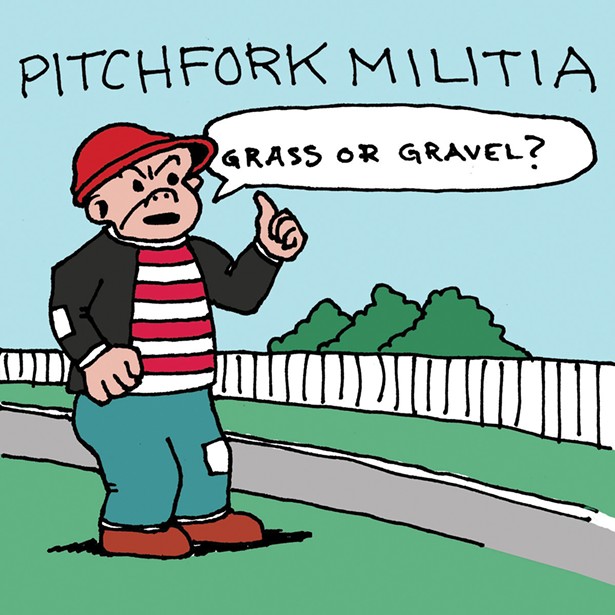 (Independent)
Pitchforkmilitia1.bandcamp.com
PITCHFORK_MILITIA_Family_Circus.mp3
Update Required To play the media you will need to either update your browser to a recent version or update your Flash plugin.

Peter Head gave himself a challenge: Write 14 songs in 14 days. Head, the guitar slinger and vocalist of Palenville stalwarts Pitchfork Militia made good use of the fortnight on the band's latest album. Abetted by mates Karl Krause (bass) and Joe P. Morgan (drums), the songs are loosely inspired by classic comic strips. Leadoff track "Family Circus" is driven by distorted guitar and a thudding bassline. Head gives a withering review of the square, Middle American family in the round-bordered comic strip: "You know those stupid kids were always wetting the bed!" The band's trademark blend of punk, country, rock, and blues is on full tilt, whether, lusting after an intrepid reporter in "Brenda Star," giving the war orphan "Dondi" a speed twang soundtrack, or lending some staccato riffing to the pipe-smoking outdoorsman of "Mark Trail."