If your summer playlists have gone stale, check out some of the latest sounds coming out of the Hudson Valley this August:

Furniture music was the term Erik Satie coined for a series of short pieces created to be performed live yet functioning, essentially, as background. Useful stuff, sonically speaking. Brian Eno carried the concept three steps further with ambient music, and artists like William Basinksi have made careers of slowly shape-shifting tones. Delmar's Jim Sande eschews his pop roots with a pair of new discs that, while more organic and approachable, share an ethos. Silver is delightful for working on a Thursday afternoon—busy enough to draw your attention, light enough to let your mind wander. Perfect to paint by! Pagliacci, alternatively, is for the night drive later that evening, allowing thought to lead the wheel as much as the hands. Remarkable care is given here by Sande; a surprising amount of instrumental variety and gentle humor—strings and a touch of circus fun—blend in with the thoughtful dark wash.

Let me be clear at the outset: I don't like twang. I have no explanation or excuse for my bias; it's just something my ears reject. I've turned down more than a few review assignments at the first sound of a banjo. Which is all the more reason to trust me when I rave about Kendl Winter, a banjoist and singer-songwriter with a voice even twangier than Emmylou's. The overall vibe of this release on New Paltz's Team Love label sounds like Winter and her musicians (Joey Capoccia on bass, Derek McSwain on mandolin, and Joey Seward on drums; Winter also handles guitar) snuck into Daniel Lanois's recording studio after a Wrecking Ball session and, with mics still hot, laid down these haunting, minimalist tracks. (Kudos to Joey Seward as producer.) Winter's "modern old-time" approach belies her past efforts playing punk and other styles of music, and the drones she builds upon owe as much to the Velvet Underground as to primitive folk and hillbilly. Winter has often been compared to Iris DeMent and Gillian Welch, but to my twang-allergic ears, her sound transcends the country-folk idiom, and her lyrics—"using bottles like vehicles to get around"—are more Maggie Nelson than "Little Maggie." Winter's twang is just an illusion cloaking the sound and sensibility of a thoughtful, meditative artist mining and playing her own brand of deep soul.

It's a stretch from the straight-ahead big-band-style of Greene County-based trumpeter Chris Pasin's long-time boss Buddy Rich—the horn man toured as a member of Rich's band for years—to the bent sounds of free jazz firebrand Ornette Coleman. But Pasin had a familiarity with the avant-garde in his back pocket long before he signed on with the legendary drummer and bandleader, absorbing albums by Coleman, Albert Ayler, and Don Cherry when he was a teenager. On this set of five Coleman compositions; two fine Pasin originals; and a version of Ayler's immortal "Ghosts" with vocals and lyrics by Ingrid Sertso, Pasin brings his knowledge and bright, burnished tone to the music, laying claim to his own rung of its ongoing evolution. As a leader, he's aces as well, allowing his impeccably assembled ensemble of area greats—Sertso and her husband Karl Berger (vibraphone, piano), Michael Bisio (bass), Harvey Sorgen (drums), and Adam Siegel (saxophone)—ample room to shine. 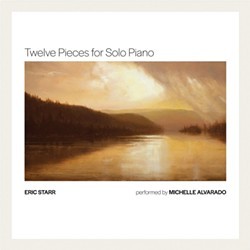 The jazz drummer and composer Eric Starr has long favored the "chamber" side of jazz—modernist harmony, contrapuntal ensemble arrangements, and through-composed forms as opposed to the head-solo-solo default of pickup jazz or the spontaneous design of the "free" school. On 2018's Twelve Pieces for Solo Piano, Starr makes it official. This serious composer's gambit has been hailed as a "valuable addition to the piano literature" by Andy LaVerne, a jazz legend who also treads that line between jazz and serious chamber music, along with Brad Mehldau, Fred Hersch, Dan Tepfer, and so many of jazz piano's current giants. Performed with lucid elegance by Michelle Alvarado, Starr's compositions identify with the French Impressionistic tradition in their harmonic colors, their movement agile but not driven by resolutions. In their unpredictable thematic development, they bristle with invention and mischief. And—this is significant—none of it swings much. Whether the serious repertoire will recognize this bid, as LaVerne suggested it might, remains to be seen, but there is no doubt about the substance and elaborate design of this music.