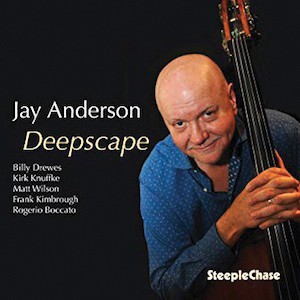 New Paltz bassist Jay Anderson's new album puts the prolific artist back in the role of bandleader after decades of support playing. Deepscape is a kind of curriclum vitae, convincingly covering the waterfront: Anderson and crew create then punctuate great planes of tense atmosphere in Morton Feldman's "Rothko Chapel"; swing with easy bravado through Keith Jarrett's "Southern Smiles"; and skitter and trill gleefully in Branford Marsalis's "The Mighty Sword." But there are some delightful outliers: Anderson's lyricism as a player is highlighted on Billy Joel's (yep) "And So It Goes," and the version of the Pee Wee King-Redd Stewart classic "Tennesse Waltz," performed as a duet by Anderson and harmonium player Frank Kimbrough, is primed and ready for the next Nick Cave-scripted Western. The titular track is a drone-y improv that I could have listened to for another 15 minutes, and "Momentum" is a moody piece with marvelous interplay by Billy Drewe (alto sax) and Kirk Knuffke (cornet).