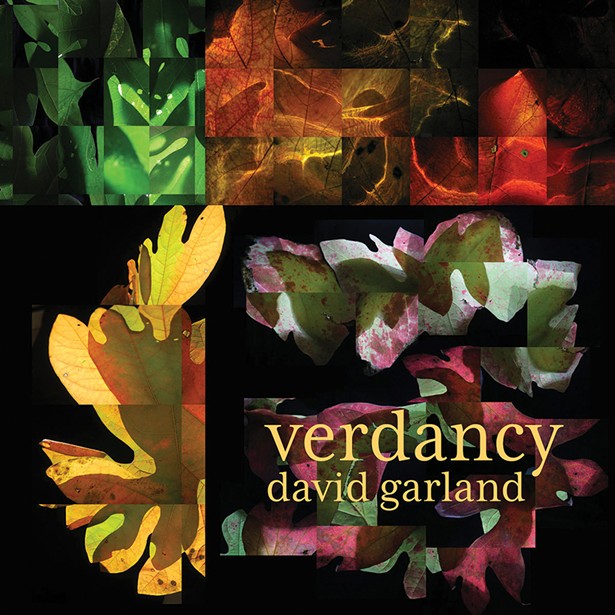 DAVID_GARLAND_When_We_Moved_To_The_Trees.mp3
Update Required To play the media you will need to either update your browser to a recent version or update your Flash plugin.

It comes to you wrapped in, appropriately, a garland of green: A chartreuse ribbon surrounds the grey box containing the four CDs that comprise composer, vocalist, and multi-instrumentalist David Garland's sprawling album Verdancy. Relocated to Red Hook after more than 40 years as a participant on the Downtown New York experimental scene and almost 30 years as the host of the eclectic New York Public Radio music program "Spinning on Air" (now a podcast emanating from his home studio), Garland has clearly found a fertile furrow for his own art; the epic Verdancy encompasses a staggering four hours of music. It also features a formidable contributing cast of New York friends and Hudson Valley neighbors: Yoko Ono (lyrics on one piece and vocals on another), singer and violinist Iva Bittova, bansuri flutist Steve Gorn, singer Arone Dyer (Buke and Gace), composer and keyboardist Kyle Gann, and others.

This is a rare kind of music that balances tranquility with moments of challenging dissonance—which somehow never feel dissonant or challenging, but soothing instead—and unpredictable, meandering structures. Perhaps it tilts toward Scott Walker's later work, with impressionistic nods to minimalism, Anglo-ethnic folk forms, and chamber music. Although Garland contributes the majority of the vocals and lyrics plus piano, clarinet, ocarina, analog synths, and other instruments, the true sonic seed from which Verdancy sprouts, he says, is his electronically augmented acoustic 12-string guitar, whose controlled, gracefully arcing feedback permeates the set. With so much slow, deep music here, it should take you at least a year to properly listen to and absorb Verdancy (as it has for this reviewer). But your year will be infinitely better for it.