It’s enough to make any modern dance fan jump for joy. In the wake of the waning lockdown, famed and influential dance company Pilobolus is celebrating its 50th year with the Big Five-Oh! tour, a jaunt that brings the troupe to the Egg this month. Founded in 1971 and based in Connecticut’s Litchfield County, Pilobolus has performed more than 100 choreographed works in venues around the world and appeared at the 79th Academy Awards ceremony as well as network TV. The group is well known for its dazzling and innovative shadow performances, which are the high point of the anniversary tour program. Ahead of the show, the company’s artistic directors, Renee Jaworski and Matt Kent, answered the questions below by email. The Pilobolus Big Five-Oh! tour will be at the Egg in Albany on November 12 at 8pm. Tickets are $36.

What’s your history with Pilobolus? When did you start at the company and what attracted you to it? Were you a fan prior to joining?

Renee Jaworski: We began working as dancers in Pilobolus, and like all Pilobolus dancers, we were collaborating together with the artistic directors to create new work. We moved into more directorial responsibilities, especially as the company expanded in the wake of our Academy Awards performance. The company’s values of collaboration, exploring, and developing impulses, innovation, risk taking, partnering, and an openness to storytelling through non-traditional physical expression were qualities we both were drawn to, first as fans and then as members of the group.

What makes Pilobolus unique among dance companies? It’s often cited as being very influential; in what ways would you say it’s influenced the modern dance idiom?

Matt Kent: At first Pilobolus was unique because it was composed of only men, and men who had no formal dance training. [Cofounders] Martha Clarke and Alison Becker Chase joined the company and a new dynamic emerged. A partnering technique grew out of the company’s explorations that was novel at the time, but now can be seen in works of other dance companies. Later, when Pilobolus hired dancers to perform and create new work with the founding directors, they were unusual in their collaborative approach with the dancers. The dancers who work in the creation of a piece are formally credited as collaborators of the work. This can be seen across the dance world now more frequently. In the 2000s, Pilobolus created a new medium of telling stories through composite figures created with human bodies in shadow, and now shadow companies perform on TV shows like “America’s Got Talent.”

Pilobolus began at the tail end of the 1960s hippie era and seems to have been greatly informed by the ideals of that period, especially in terms of civil and gender rights awareness. The company’s website carries statements of support for the Black Lives Matter and Native American land rights movements. Are there any examples that come to mind for you of ways in which those movements have affected Pilobolus’s recent work?

Renee Jaworski: We have recently collaborated with Darlene Kascak of the Schaghticoke Tribal Nation on a new work that is in development called “The Legend of the Wendigo.” It is our hope that we can collaborate with other Native American designers on this project. Keep an eye out for upcoming developments on this exciting project. 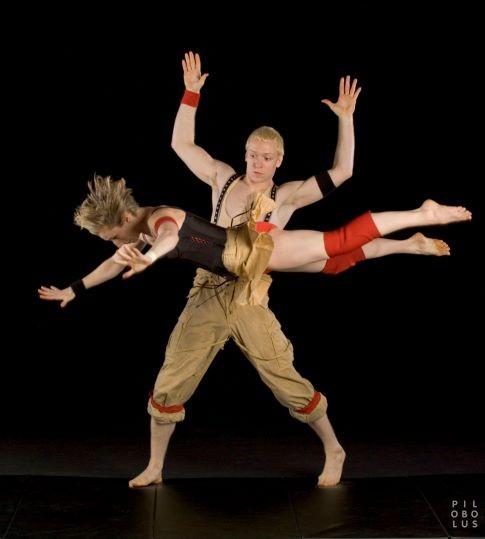 Obviously, COVID has had a dramatic level of impact on dance, an artform that requires close physical contact—especially for Pilobolus, a troupe known for the super-close contact of its performances. How have the challenges of the pandemic affected the company’s work?

Matt Kent: The lockdown has hit us, like all performing arts. But we are grateful for our supporters, staff, and dancers, who continued to create during these challenging times. We were able to create two outdoor roving art performances with amazing collaborators we call car safaris. We also put together a four-person pod to present a performance called “Four @ Play,” which took our work to outdoor stages.

The Big Five Oh! tour comes to our region this month. What can you tell us about the elements of the show?

Renee Jaworski: The Big Five-Oh! program has vintage favorites from across decades of work. These pieces are timeless classics, and we are excited to share them with fans new and old.

For those who’ve never experienced the magic of a Pilobolus performance, what should they expect?

Matt Kent: If you have never seen Pilobolus, prepare to have your idea of dance and performance changed forever. The program has humor, incredible energy, mind-bending partnering and images, and our signature shadow work.

Speaking of Pilobolus, The Egg