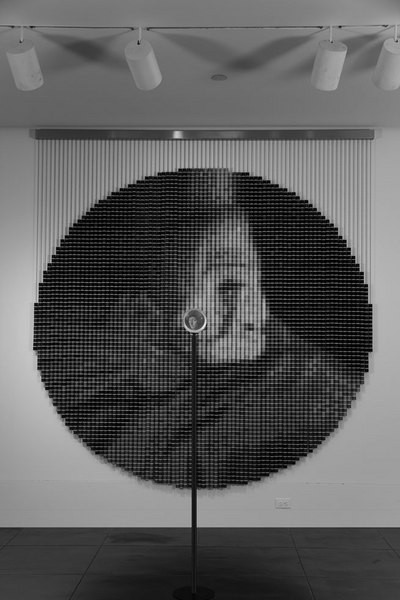 Eighteen thousand pen caps. 20,000 thread spools. 10,000 Swarovski crystals. 27,000 pipe cleaners. The items that Devorah Sperber has used to fashion her large-scale installations range from dazzling to quirky, but all plays with viewers’ prejudices toward objects not typically associated with art. “I pick materials that have some dignity—a thread spool is a stunningly beautiful object,” Sperber says. “I’m using very lowly craft materials and yet I’m keeping them on the side of ‘high art.’” We may see it as just a material to sew clothing with, but to Sperber, a thread spool is a building block to mosaic-like re-creations of Monet’s water lilies, the holodeck from “Star Trek,” or the iconic photograph of Marilyn Monroe in a billowing white dress, straddling the updraft from a subway grate.

Sperber, a Woodstock resident, began fashioning thread spool works in 1999 after she saw the Mona Lisa in the Louvre. Surprised at how small it is—21 by 30 inches—Sperber set out to “bring back the lost experiential component” of scale and re-created versions of The Last Supper and the Mona Lisa to scale. (Sperber has created a series of pieces based on the Mona Lisa in varying sizes.) “My focus has always been on how mechanical reproductions alter images as they exist in the mind’s eye, because my interest has been in how the human eyes and brain function and how they make up the sense of reality.”

When viewed through an optical device placed in front of the installation, abstract modular units of color are transformed into an identifiable painting. The viewer is suddenly able to make out the pearl earring and blue hat on the young woman in a take on Vermeer; Mona Lisa imparts her mysterious, playful smile. “There’s something about the element of surprise that’s involved in each one of my works,” Sperber says.

Sperber created her tribute to Jan van Eyck’s Portrait of a Man (Self-Portrait?) (1433) after stumbling upon a scientific study revealing that hundreds of artists throughout history had subconsciously depicted figures in portraits on a symmetrical axis. The brain’s inclination to symmetry—a phenomenon known as eye centeredness—is perfectly exemplified in van Eyck’s painting. But Sperber admits that there was also a simpler reason as well for why she finally chose the piece. “That stunning red turban,” she says. “It’s just such a beautiful color.”

Sperber’s work is currently on display at Kidspace at MASS MoCA  in North Adams, Massachusetts, until September 1. “Flash Back,” an exhibition of selected material-based works by Sperber, will be on display at the Kleinert/James Art Center in Woodstock, August 2 through September 7. www.massmoca.org;
www.woodstockguild.org; Portfolio: www.devorahsperber.com.