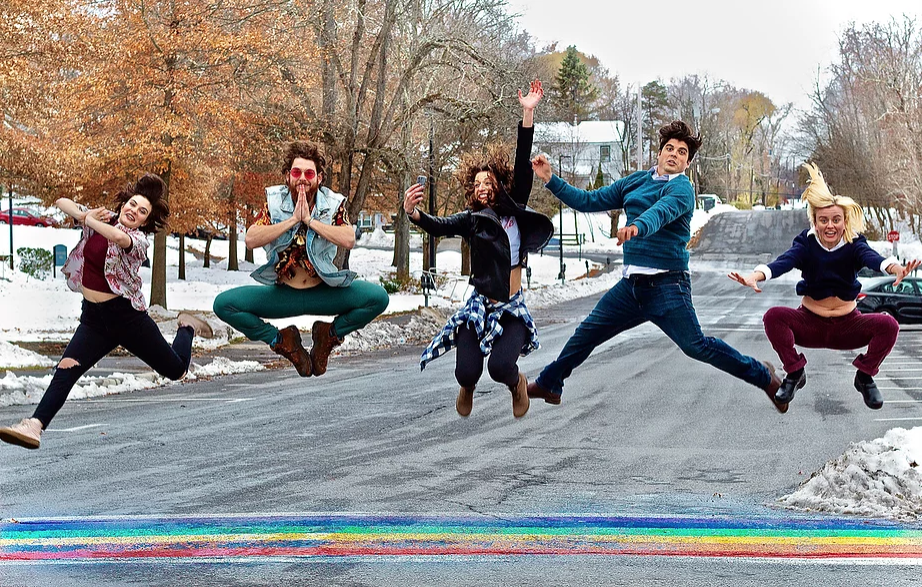 Denizen Theater, creative brainchild of actor, architect, and real estate developer Harry Lipstein together with actors Ben Williamson and Brittany Proia, is already making waves in the New Paltz art scene just months after its ribbon-cutting ceremony this past September. The non-profit black box theater tucked away in New Paltz’s Water Street Market, has chosen the world premiere of “Adaptive Radiation” as the second production of its inaugural season, and the rave reviews are pouring in.

“Adaptive Radiation” advertises itself as a comedy about the millennial generation’s quest for self-discovery, but its themes speak to the seeker in all of us. Four 20-somethings overcome by a mysterious magical force walk out on their uninspired jobs in search of something—anything—that makes them feel alive—like active participants in their own existence. Playwright Hannah Benitez’s witty dialogue drives the story forward and not so much breaking the fourth wall as opening windows in it, calling out to the audience to come and play.

The show’s metafictive elements are refreshingly unconcerned with their own mechanics and, instead, earnestly exhort viewers to take an active role in interpreting the play’s none-too-obvious position on self-actualization and modern existential dread. For 90 enchanted minutes, the story blurs the line between magic and reality just enough for viewers to ask whether the literal “radiation” wreaking havoc on the characters’ world might also exist, figuratively, in themselves as a wonderful and terrifying potential to let a little wonder into their own lives.

Benitez, a self-described “Cuban-Jewish-American millennial” hailing from Florida, says this is by far the “weirdest play” she’s ever written. Her last piece, “Dike,” tells the story of two sisters reconciling a newly discovered sexual identity with their family’s religious views and is currently being staged at Urbanite Theater in Sarasota, Florida, also founded by Lipstein.

Judicious stage direction from Sarah Carlson-Brown makes sparing use of props and sends actors to all corners of Denizen Theater’s little lantern-studded stage. As to the actors, I can think of no higher testament to their talents than that their delivery repeatedly made Benitez, who attended the dress rehearsal, laugh uproariously at her own jokes. Genevieve Simon is a force of nature in the lead role of the neurotic Mel, and Fredi Berstein, costarring as Mel’s “basic” roommate Olivia, delivers the most panicked reaction to a bouquet of flowers I’ve ever witnessed on or off the stage.

Founder and Producing Artistic Director Harry Lipstein aspires to make Denizen a cultural hub and reliable income source for actors in the region. His passion for live stage performance was evident in a conversation we shared after the rehearsal, in which he exhorted me to see the play again so I could appreciate the performance’s evolution and the nuanced differences between each iteration.

This self-appointed critic, with all the force of her pedigree as a bona-fide millennial, urges the jaded and the whimsical alike to buy tickets to "Adaptive Radiation" before its final showing on December 30.

Performances are at 8pm, Wednesday through Saturday, with 2pm matinées on Sunday. All Wednesday performances will be followed by a Q&A with the cast, and audiences are invited to stay for a one-time “Post-Show Informed Panel Discussion” after the Thursday, December 20 performance. Tickets and details available online at denizentheatre.com/tickets or by phone at (845) 303-4136.