The intersection of Interstate 84 and Route 9 shines brightly for those passing through on either of those nighttime highways. One of the principal gateways to Dutchess County and regions north and east, this stretch of stores, chain restaurants and hotels, medical offices, and industrial parks can be called a big box-store carnival, a food extravaganza, a multilane bumper car ride, or a festival of lights. Despite its many informal appellations, the area described above is most appropriately called the Village of Fishkill. Yards away lies its other half: the quintessential small town housing some of the oldest buildings in Dutchess County.

Traveling north out of the mouth of heat and bright lights, one encounters a crown jewel to the west, the First Reformed Church of Fishkill, standing sentinel at the gateway to this historic region. Rich in its own history, including its employment as a prison during the Revolutionary War, it is maitre d’ to the Fishkill Village District, which was added to the National Register of Historic Places in 1973 for containing a significant concentration of structures dating from the late 1700s.

As in many Hudson Valley towns, a distinct revival is currently underway in Fishkill, admittedly made possible by the success of the bustling strip down the road. According to Kathy English of the Southern Dutchess Chamber of Commerce, the 10 or so hotels clustered at the junction of I-84 and Route 9 are what has allowed Fishkill’s restaurant row to flourish on Main Street. Employees of IBM subsidiaries who stay for extended business trips and who seek solace from chain-restaurant monotony have also added to the increasingly popular Fishkill dining and nightlife.

Main Street offers a variety of creative dining spots tightly packed in refurbished brick buildings. One such restaurant, Il Barilotto, offers Italian peasant cuisine with an urban twist and provides a cozy atmosphere with an extensive wine list. The manager of Il Barilotto since its opening in 2001, Scott Rosenberg, values the restaurant’s role in fueling the recent status upgrade of the village, attracting a crowd of transplanted families from New York and Westchester who are accustomed to urban amenities.

Fishkill’s enclave of eateries allows visitors a taste of the typical Hudson Valley Main Street: quaint, historic, reviving, and chic. And, as per its original function, the village acts as a gateway to the rest of Dutchess County; specifically, the historic lands of the Rombout Patent. The first tract of land ever licensed in the county, the patent once encompassed Hudson River shoreline access and stretched as far afield as present-day LaGrange and East Fishkill.


Green Jewels and Sacred Lands
Visitors to the region via the Fishkill gateway can further experience the lands of the patent as they rise up to greet drivers. Heading northwest will eventually lead to the 1,000 acres of the Stony Kill Farm Environmental Education Center on Route 9D. As one draws closer to this significant chunk of preserved open space, the road actually becomes incidental to the thriving meadows, perfect overgrowth, and various species of birds. The splendor is especially present in the autumn, when the country roads in Southern Dutchess County, despite their proximity to suburban sprawl, stand as worthy representatives of the region.

Stony Kill sponsors a variety of educational opportunities for those seeking to know more about all things natural. In addition, it is home to Common Ground Farm. Devin Foote, one of the principal farm managers, recognizes Stony Kill as a community asset and an oasis within such a rapidly growing part of the region. In turn, he characterizes Common Ground as a suburban farm meant to be experienced by the surrounding residents, specifically through projects like its 180-family CSA (community-supported agriculture) project, its Green Teen community gardening project, and its weekly donations to a local food pantry.

A short drive north through more canopied hills and stonewalled corridors leads into one of the true spiritual pulse points of the region. Known for its role in the growth of industry, the generative force of the Wappingers Creek falls have long attracted those of a sublime sensibility, such as the Wappinger Indian tribes. Heading towards the hamlet of New Hamburg and the southwest border of the Village of Wappingers Falls, one encounters the lands of Alex and Allyson Grey’s Chapel of Sacred Mirrors. Heading a nonprofit spiritual community since 1996, the Greys found themselves drawn to the serene, protective lands, which had most recently been owned by the United Church of Christ. Allyson describes the property as a “wonderful jewel,” perfect for a retreat center and permanent home for Alex’s visionary art collection. (Alex Grey’s painting Praying appeared on the November 1999 cover of Chronogram.) As a way to raise money for the construction of the chapel the Greys offer wisdom walks, musical events, workshops, and intense full-moon ceremonies complete with bonfires.

More sacred lands and corresponding holy structures exist north of the village, including the Mount Alvernia Catholic Retreat Center, the Monastery of Saint Clare, and the Kagyu Thubten Choling Buddhist Monastery. Of particular interest is the latter’s elaborate and breathtaking enlightenment stupa (temple of prayer), which is sited to reflect its brilliant red, blue, green, and gold facade into the Hudson. Monastery representative Yeshe Palmo describes the stupa as a “power node,” playfully comparing it to a spark plug, and stating that it was built to allay terrorism and disease and balance the four elements.


A Homegrown Renaissance
A keen awareness of a churning energy will next lead any traveler straight into the heart of another historic town, the Village of Wappingers Falls. When the Rombout Patent was eventually divided, Lot 1 became the setting for the village and contained a large portion of  Wappingers Creek, including its powerful falls. An extremely fortunate development, driven either by luck or keen business sense, the division of land set the stage for a great influx of industry in the years to follow. The result is a certain mystery that permeates the streets fueled by the dynamic nature of water, the remarkably intact historical structures, and a well-layered industrial past.

Like Fishkill, Wappingers Falls is experiencing a revival of its own. One of the premier driving forces behind it is Mayor Matt Alexander, who has attracted the attention of prospective developers, hard-working business owners, and even the folks up in Albany. One of the first notable pioneers, Mike Kocan, is the owner of the Ground Hog Coffee House located at the top of  West Main Street. Opening his doors in 2001, Kocan renovated the former saloon and tailor shop to mimic the original aesthetics of the building. At the time, the fury of big-box retail and commercial overflow along Route 9, including the construction of the South Hills and Galleria malls, had left its mark among the empty storefronts in the village. Kocan answered the call by providing a unique place for coffee and conversation.

The efforts of Alexander and Kocan have not gone unnoticed. Among recent developments in the village is the anticipated Franny Reese Memorial Park. Conceptualized in 2006 and set to be completed with the next two to three years, the project seeks to honor Franny Reese, an heir to some of the original inhabitants of the village and one of the original founders of the Scenic Hudson organization.

The location of the proposed park is Wappinger Lake, just east of the falls, a body of water impounded by a masonry dam built in the 1840s. It is a peaceful sanctuary for birds and those in the immediate community but falls short of attracting regional visitors because of a lack of real waterfront access. The park has a truly urban design and will loosen the dense and gritty landscape of West Main Street. It will also provide 400 feet of water access, municipal parking, a winding pathway, innovative landscaping, an amphitheatre, and a dock for canoes and kayaks.

Slowly, its original attributes are leading this village into a renaissance of sorts. And it can be said that a green revolution underpins the growth. Perhaps the most exciting green prospect is the long anticipated redevelopment of the Dutchess Bleachery complex, described by Mayor Alexander as the true heart of the village. Original operations occurred there as early as 1830 as a calico dye and printing company that employed a large chunk of the population in the village all the way to 1955.

Nowadays, the Bleachery is a mixed-use complex housing many small businesses, including the studio of well-known sculptor Michael Speaker and an active hydroelectric plant that feeds power into the common electrical grid. Challenges to development include the property’s long-held designation as contaminated. In the meantime, the village continues to engage the state on several different fronts, securing funds in the name of smart growth, brownfield clean-up, and waterfront revitalization.

There is no doubt that potential abounds in the many efforts now under way in Wappingers Falls. Simply put, this special village is creeping to an apex. Like the other revitalized towns in the region, it is undoubtedly a place of even more untapped exploration. It contains a permeating history that is palpable on the sidewalks and along the winding back roads.

Although suburban growth patterns remain popular for some, communities recognize that efforts at rebirth and historic preservation do not have to be shadowed by rampant growth along the mighty Route 9. In fact, these two distinct animals may be able to someday coexist, and provide for a more diverse economy and an inherent sense of place for the residents of Dutchess County. 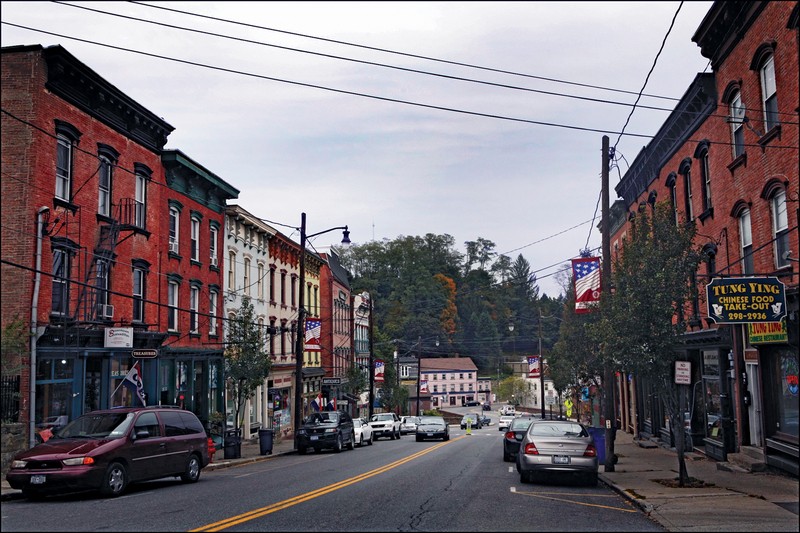 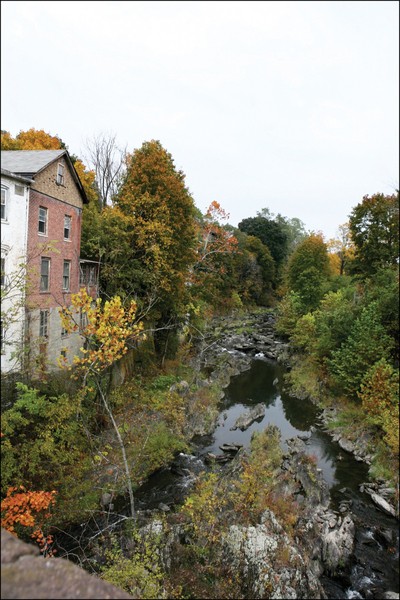 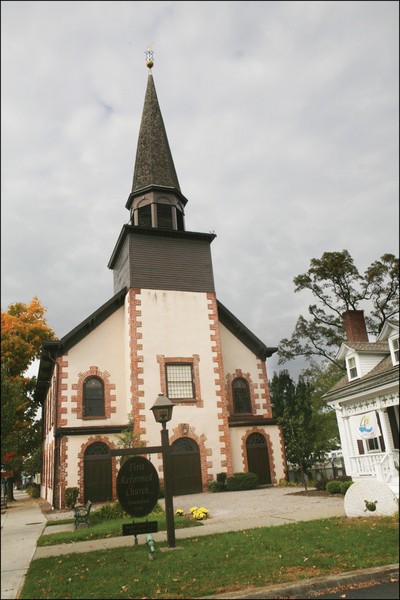