In March, when the coronavirus pandemic struck and life in Catskill came to a grinding halt, Michelle Williams found herself with a restaurant, Mermaid Cafe, that she'd sunk all her money into but couldn't operate. She'd only been open for a few months when the pandemic hit. (Williams also owns Bittersweet Catskill, an ice cream shop.) "My fridge was full of perishable foods, and I decided I would just come up with a way to give it away," she recalls. "I wouldn't feed into the problem and the darkness but rather form a solution and seek light, even if it wasn't good for my businesses' bottom line."

Her solution was to create the Stone Soup Project, which delivered homemade soup to about 140 people three times a week from March through June across Greene County. Williams and her friends, family, and other local businesses, including Hilo Catskill and New York Restaurant, and a swath of community members came together, donated their time, energy, and money to help make it happen. The summer brought too many pressures on Williams to continue the effort, but if there's another shut down, she may relaunch it.

"I knew that there would be many hands to make light work of it all," Williams says. "In a time that seemed so dark with so much destruction and fear, I was blessed to be surrounded by a team of dedicated volunteers and friends."This wasn't an isolated act of generosity for the village of Catskill. As winter gave way to spring, Wesley Harper and Dante Bardo teamed up with Hannah Otten to create the Catskill Community Micro Farm, which since its first harvest in June has provided more than 1,100 pounds of fresh produce to low-income residents through the Catskill Food Pantry.

Much of Greene County is a food desert, says Otten, who heads up logistics for the farm as one of the lead organizers, and the pandemic has made things worse. "There are a lot of residents who don't have access to fresh produce," she says.

The effort included nearly 70 volunteers who built 25 raised beds on an acre of land donated by St. Peter's Church, located at the corner of William and Spring Streets. At the municipal level, Michael Ragaini, the village code enforcement officer, and the Department of Public Works helped smooth the way with the village government, according to Harper, the other lead organizer. "They really went to bat for us," he says.They plan to continue the farm next year. The program is in the process of becoming a nonprofit, and Otten and Harper are fundraising this winter to put in an automated watering system. "I wasn't surprised by the support," Harper says. "I think most people in the area, myself included, were eager to work together on a project that had such a clear goal and benefit to the community we live in."

Vincent Seeley, president of the Village's Board of Trustees, was happy but not surprised by the outpouring of support for Catskill's businesses and residents. As examples of homegrown efforts, he pointed to the Stone Soup Project, Micro Farm, and the Catskill Local Development Corporation's (LDC) program that made it easy for people to purchase gift cards for many of Catskill's businesses through its website (the program ended in July). Seeley also praised residents who've been supporting local restaurants throughout the pandemic. "People stepped up with not just purchasing food but with tipping generously," he says.

In March, Liam and Laura Singer, who own HiLo Catskill, a cafe, and Avalon Lounge, a nightclub that serves Korean food, worried that they might be only a few months away from permanently shutting down—but people quickly began offering help. Their landlord at HiLo worked with them after they closed for several months to assess how to move forward during the pandemic. The Bank of Greene County speedily processed their federal Paycheck Protection Loan. The LDC's gift card program brought in "a significant and helpful influx of money right at the beginning of everything," according to Liam.

By the summer, they'd pivoted Avalon to a Korean takeout restaurant with outdoor seating and HiLo was back open with limited indoor seating and a revamped menu focused on grab-and-go items. Both businesses benefited from the village allowing them to use municipal parking spots as seating areas like many other restaurants on Main Street. 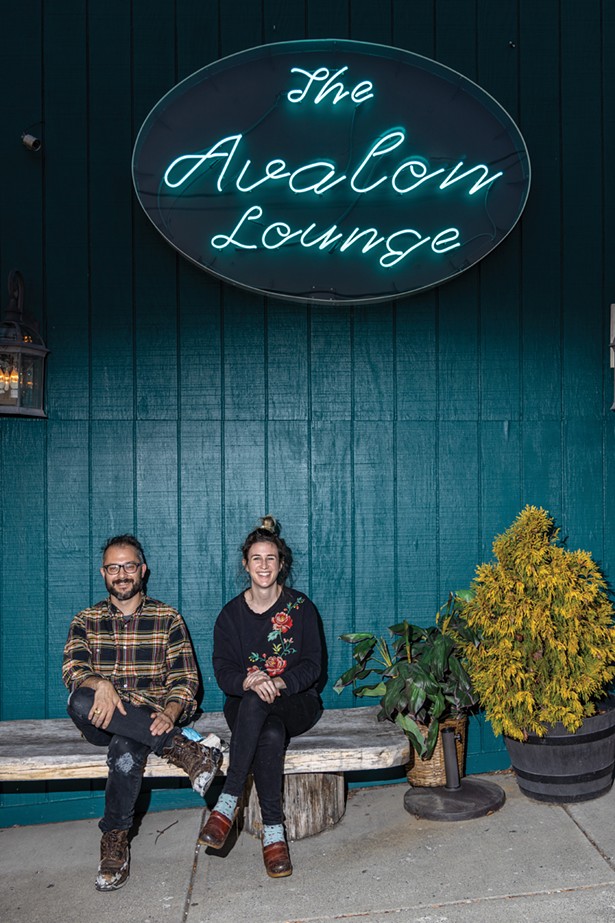 Natasha Witka, the owner of the New York Restaurant, says the past year has been "really surreal." She closed the eatery that serves Polish-influenced modern American fare during the early months of the pandemic. "We had 27 staff members," she says. "And it was like the lights were shut off. Poof!" When she reopened in May, it was with limited indoor seating and expanded outdoor seating, and a truncated service schedule. "We're operating five years later like a brand new restaurant," Witka says. "We've really had to start from scratch." In August, the restaurant got a new executive chef, Francesco Gallo, a New York City transplant, who has helped reinvent the restaurant. Changes have included a revolving weekly menu and offering meal kits that customers can prepare at home. Witka believes even with the coronavirus pandemic raging the village will continue to thrive. "I have never felt stronger about the people that are here," she says. "I feel strongly that no matter what this winter brings, we'll be able to get through it together."

Just as Max Ocean and Zane Coffey, the owners of Subversive Malting and Brewing, were putting the finishing touches on their expanded brewing operation and taproom at an old mechanic's garage at 96 West Bridge Street, the pandemic hit. They were forced to temporarily close the taproom, but quickly moved their operation online and began offering one-hour beer deliveries to village residents, curbside pick-up, as well as overnight shipping across the state. This summer, their expanded beer garden became a mecca for socially distanced drinking and wood-fired pizzas from Marymichael D'Onofrio and Patrick Clark of Be Golden Farms.

The pandemic has taken a toll on Main Street. The Catskill Country Store, a mainstay since 2011, closed this year as did Circle W Market's Catskill location. Snap Fitness, a 24-hour gym, has also permanently closed, according to its Facebook page. The Catskill Community Theatre, the storied movie theater that's been around for more than 100 years, remains closed because of the state's COVID-19 restrictions. 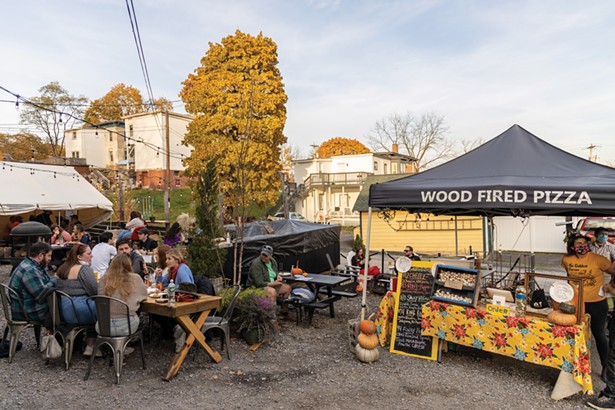 A few businesses have opened this year despite the pandemic, including Angel's Latin Restaurant, at 334 Main Street, that specializes in Dominican food; Catskill Cryo, a health spa at 414 Main Street; and Left Bank Ciders, a cidery and tap room at 150 Water Street.

Left Bank, which produces small-batch ciders from local apples, is owned by Anna Rosencranz and her husband, Tim Graham, and their friend Dave Snyder. They'd been building out the space for two years and were finally ready to open in March when the pandemic hit. They pushed back the opening until the state allowed outdoor dining this summer. They opened their tasting room in July, and "people seem happy to have us here," Rosencrantz says.

They now live in Catskill and have found it to be a close-knit community full of "integrity and spirit" with creative people "working to be a force for good, positive change," Rosencranz says. "We hoped we'd be welcomed by the people who live here and the businesses that came before us, who made Catskill into what it is today," she says. "We haven't been disappointed. Everyone has been supportive, kind, and generous."Over the summer and fall, Rosencrantz has seen an influx of tourists to the area thanks to a renewed interest in in-state tourism. The Singers also noticed more tourists coming from within the state—as well as many new residents. That's been good for business. "There's a significant amount of tourism that's been diverted toward the upstate area because people aren't traveling as far away, but there are also a lot of people who have relocated from the city," Laura Singer says. 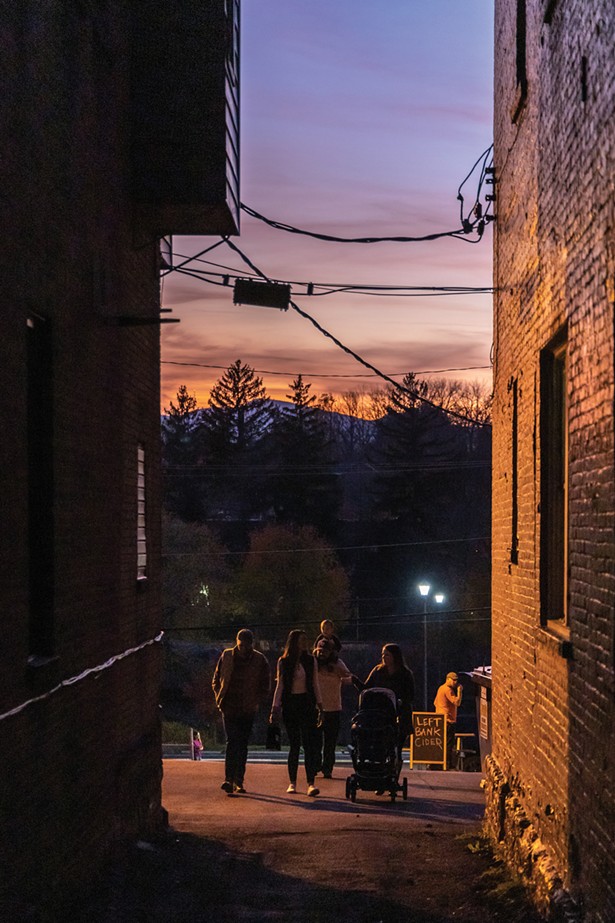 Olivia Boren and Christopher Dooley, two filmmakers in their twenties, moved to the village from Manhattan in early September. Their jobs allow them to work remotely. They have a small film production company, Jack and Grace Production House, and Dooley is the online program manager for a children's after-school and summer camp organization. They have family in the area, and initially began looking for an apartment in Hudson, but found rental prices too expensive. They'd heard that Catskill was a small, artistic village. "We're loving our local spots now and often take a quick stroll down to Main Street for a scoop from Bittersweet or to window-shop at Kirwan's [a game store on Main Street]," Dooley says. "Don't get me started on how delicious the tater tots are at Mermaid Cafe."

Boren calls Catskill "a hidden gem for us" and says its vibrancy has pleasantly surprised her, especially being a Londoner used to living in big cities.

One consequence of the coronavirus pandemic is Catskill's booming real estate market, according to Witka, who is also a real estate agent with Century 21. "Intense" is the actual word she uses when describing it. Demand is high and inventory low, which makes for a seller's market, and it's a mix between turnkey residential and commercial properties and fixer-uppers and rehabs, she says. "The best kept secret is finally out," Witka says. Historically low interest rates are also fueling the boom. 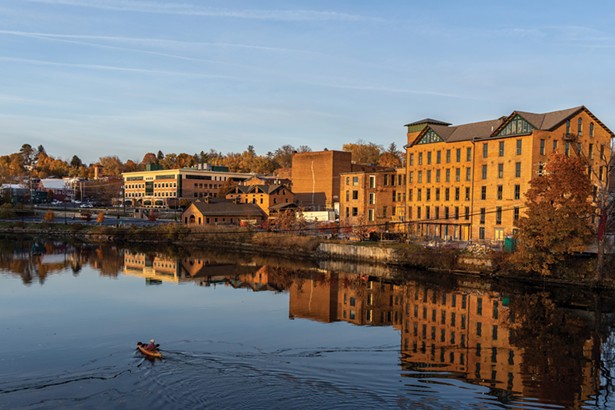 "We have some agents in our office that have been agents in the area for 40 or 50 years and no one has experienced anything like this, not even post 9/11," Witka says. The buyers, mostly urban expats, are "making life changes to be here," according to Witka.

The market boom has come with a downside—a lack of affordable housing for first-time buyers and for renters. "That's one of the biggest topics of conversation we've been having lately," Seeley says. "The lack of inventory has caused some people who may not be able to afford $1,200 rent or $1,500 rent to move to other areas like Cairo, Greenville, and Durham." Part of the problem is a "plague of Airbnbs," he says.

According to Ernestine Quinn, a lifelong Catskill resident who is retired from a career at the Office of the State Comptroller, rising rents has become a common topic in the last few months. "My rent went up a month ago," she says.

Quinn, who is very active in the Second Baptist Church community, says she's noticed the influx of new residents. "It's been a big change here," she says. But even with all the changes, there is one thing that remains the same: "Catskill's always been a friendly town," Quinn says.

Wrap Up in Hudson Valley Luxury With Heidi Wynne Sponsored