A Thirst for Thirsty 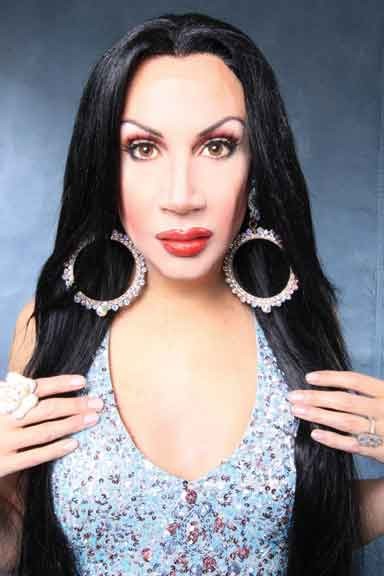 Most of the people tuning into RuPaul’s Drag Race or attending Broadway’s Priscilla: Queen of the Desert crave the entertainment guaranteed by men running about in high heels and wielding a sharp tongue. A smaller group looks to drag queens for a tutorial in gender politics and the courage of nonconformist self-expression.
(American ardor for drag queens, however, goes only so far: A recent J. Crew ad, in which a mother helps her young son paint his toenails pink, sparked a debate on TV’s “The View.”)

For both groups, Catskill-based filmmaker Margo Pelletier is working on a new film, Thirsty. The title of this “post queer musical,” refers to female impersonator Thirsty Burlington. For those eager to play fiscal midwife to this work in progress, Pelletier’s production company, Thin Edge Films, is holding a benefit on May 6 at Club Helsinki in Hudson, starring Ms. Burlington, the veteran performer Musty Chiffon (the fearless Dini Lamot), and Stephen Bluhm.

Pelletier traces the genesis of her project to 2005. She and business/life partner Lisa Thomas were vacationing in Provincetown. It was off-season and the hordes had not descended yet in their flip-flops, Speedos and attitude.

The pair was still editing their indie documentary Freeing Silvia Baraldini, about a 1970s radical activist who had been railroaded by the American government. Frustrated over the miniscule budget, the two discussed launching a more commercially viable project “that somehow could integrate a subculture with a mainstream culture.”

Walking along Commercial Street, they were greeted by a tall, attractive “boy-man” in front of a club. He shoved a flyer in their hands and convinced the women to attend a drag show about to start inside. There, a statuesque figure in glittery gown, resembling the 1970s-era (read: pre-facelifts) Cher, emerged and began singing. Ladies and gentlemen, Ms. Thirsty Burlington.

“We were, like, mesmerized immediately,” Pelletier says. Over the next hour, the pair experienced “this whole gamut of emotions: we’re laughing, we’re on the verge of tears, we’re feeling nostalgic.”

By evening’s end, the pair discovered that the promoter in the street and the lady in the spotlight were two sides of the same person—a Massachusetts native named Scott Townsend. They agreed that Thirsty Burlington would be the subject of their next film project, box office success be damned.

What distinguishes Thirsty Burlington, Pelletier says, is that she eschews the typical raunch of most drag acts, offering glamour rather than an ill-fitting wig and falsies, as well as a life-affirming message.

“It’s like a spirit that jumps out of him—a very warm, fun-loving spirit,” Pelletier said. “It definitely has a sexy edge, and oftentimes he’s in skimpy Cher outfits, but for me, it feels very right-on.” (Thirsty’s mimicry extends to other show business icons including Judy Garland, Michael Jackson and the thwarted Grey Gardens socialite Edie Beale.)

Pelletier had bucked gender normatives by age four, preferring jeans and a baseball cap to frilly dresses. But as an adult lesbian, she still felt pigeonholed, despite decades of activism and queer theory classes. For her, Townsend was inspiring. “I have been waiting for this.”

The filmmakers eventually shot test footage. Onstage, Thirsty Burlington warbles the Cher classic The Way of Love. Offstage, Townsend revisits a difficult childhood, growing up gay in a working-class Boston suburb. (Find the promotional segment on YouTube or the Thin Edge Films website.) Thirsty would be a hybrid of documentary and screen musical, Pelletier said, the script weaving together fact and fancy and underscored by the affirmations that spring from Ms. Burlington’s rouged lips.

Raising the needed funds will entail “a lot of trying to pull on heartstrings,” Pelletier said, to coax open donor wallets. But she and Thomas are confident that the public will welcome a drag queen that refuses to be the butt of the joke. “This,” Pelletier says, “is the story of a survivor.”