Sarah Pirozek’s feminist indie thriller #Like is streaming on AppleTV+.

British-born, New-York-based writer-director-producer Sarah Pirozek splits her time between Brooklyn and Bearsville—the latter is the moody setting for her noir-feminist, indie thriller #Like. The film—released in 2019 and shown recently at the Woodstock Film Festival, is Pirozek's feature debut, though she's no stranger to directing.

Since film school, Pirozek has directed documentaries, music videos, and commercials, but always wanted to make narrative feature films. "I was put on this Earth to tell stories about women," she tells me during our phone conversation. #Like, a step toward that, is written, directed, and produced by Pirozek. It follows Rosie (Sarah Rich), a teen mourning the first anniversary of her younger sister's suicide, as she attempts to find the man whose online abuse led to her death. When the police refuse to help, she decides to take matters into her own hands. It's a twist on the typical revenge film—think Denis Villeneuve's Prisoners, with a female protagonist.

Reading about internet predation and watching Lee Hirsch's 2011 documentary Bully made Pirozek think about how the dangers of the real world have followed kids into the virtual realm. Researching the world of online video chat communities that online predators and pedophiles frequent sowed the seeds for #Like. In the film, Rosie's sister—who wants to be a dancer—posts videos on a site like this. She's tricked into sharing too much, then stalked and bullied.

Pirozek wrote the script before the #MeToo hashtag took off, but it feels appropriate to the moment: It's angry, feminist, and filled with the paranoia that comes from being surrounded by the leery male gaze, all without being too on-the-nose. "I grew up in an era where men had free rein. I mean, they've had free rein until recently. Do you know how many times I've walked around with my keys in my hands, ready to punch someone in the face if I have to?" she says, explaining how the tone of the film is inspired by encounters with this male gaze.

Devoid of cheap tricks and jump scares, the film's a slow burn, with some uneasy but never gratuitous scenes. The strength of Pirozek's script, including the decision to have Rosie interact with The Man (Marc Menchaca)—an unnamed person she assumes tormented her sister online—sets it apart from garden-variety social-media thrillers.

If you recognize The Man, it's because Marc Menchaca is a television regular, known for his roles as detective Jack Hoskins in "The Outsider" and Russ Langmore on "Ozark." "I wrote the script with him in mind," Pirozek says. The Man has a very limited range of physical motion in the film, an interesting challenge, and one of the reasons, she says, that Menchaca was interested in the role.

Although Pirozek isn't into "blood and guts and gore," #Like is every bit as unsettling as any body-horror film, if not more so, because its monsters could be any inconspicuous face in a crowd. Everything feels a little off, and Pirozek tells me this was an intentional mood she wanted the film to have, inspired by her experiences as a woman. "It's all a little bit like the interior world of a lot of women—unless you're with a group of friends or someone is protective of you, the world can be a little off." From a bicycle ride around the neighborhood to Rosie's interactions with Rory, a potential love interest (Dakota Lustick), everything is rife with potential risk.

Some of the tensest scenes occur in a bomb shelter, inspired by one on Pirozek's property in Bearsville. "I was always looking at it and going, 'Oh, we need to demolish or tear it down.' But I kept not doing it—it's so creepy," she says, adding, "that was a big part of the inspiration for writing the script." 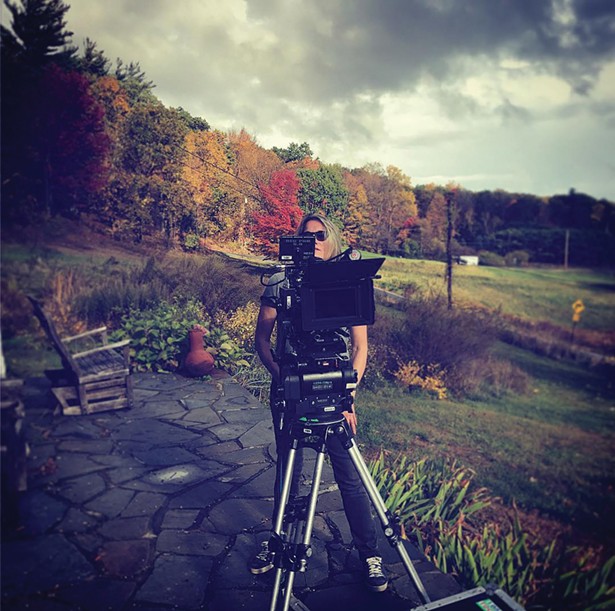 #Like would not have been easy to make without the folks in and around Woodstock. Laurent Rejto, who runs the Hudson Valley Film Commission, gave Pirozek invaluable advice about working in the area. Meira Blaustein, the cofounder of the Woodstock Film Festival, was incredibly supportive of the film and passionate about screening it. Then there were people who helped scout shooting locations, like Julie Beesmer (who runs Bread Alone in Woodstock). She went to high school with one of the police officers, who in turn spoke to the police chief, and helped Pirozek film the scenes in the police station for free.

"It's so satisfying as a female filmmaker to have my first feature be a pro-feminine, feminist movie with an amazing, complicated, strong central performance by Sarah Rich," Pirozek says. She credits the film's success, despite its small budget, to a passionate cast and crew.

There may be more in store for #Like since she's considering turning it into a limited series. She's also working on a documentary called The Coffee and Cream Club, which is about interracial relationships, and serializing a film script she wrote called The Squatters Handbook, based on her real-life experiences in London.

#Like is now available for streaming on AppleTV and on Amazon.

Hibernation Over: The Beloved Bear is Returning to the Bearsville Theater Complex

“An Evening with Josh Ritter” in Kingston