When Frank Marrazzo met his future wife Belen Millan in a bar in Spain, she was on a bad date with a man she now refers to as "the Octopus," because it seemed like he was all hands. Marrazzo bought a drink for the beautiful brunette, a native of Andalusia who attended Mount Holyoke College as an undergrad and holds a master's in international affairs from Columbia, and not long afterward the couple married.

Back then, Marrazzo was working in construction management and Millan was working in advertising, both in New York. Soon, they decided they wanted to start a business together, and eventually founded a private foreign exchange program for teenagers that today secures educational and hosting arrangements for about 300 teenagers from around the world annually.

They have two daughters, ages 8 and 11, and divide their time between a 5,080-square-foot six-bedroom, four-bath log home in Chichester, New York, a hamlet of Shandaken, and Malaga, Spain.

"Our first connection to Chichester was through owning a small weekend place that we bought with some other people. We knew we loved the area, so we began looking for some property upon which to build a main residence. We bought this land in 2001; at the time it was a 72-acre parcel, which we have since subdivided," says Marrazzo. "We kept 52 acres, and our house, which sits at the highest point on our property, at an elevation of about 1,450 feet, has views for miles. There's no one above us. Our house is the highest around here, and in theory, we could hike the ridge all the way to Woodstock."

The property excavation to build the home began in 2002, the same year Belen became pregnant with their first child.

Chichester borders Phoenicia and is located in a mountainous valley within the Catskills National Park; its northern boundary borders Greene County. The hamlet was founded in 1863 by the sons of the contractor who built the Catskill Mountain House, who were looking to establish a furniture factory; eventually, the area became settled by factory workers. In 1939 the furniture factory went out of business and the whole village was put up for auction; it's been in the hands of private owners ever since. 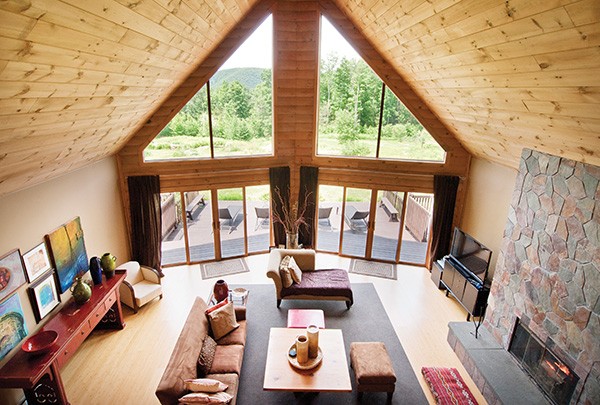 There are two major creeks that run through the hamlet; the Marrazzos live on Stony Clove Road, which takes its name from Stony Clove Creek. The driveway from the road to the Marrazzo house is almost half a mile long. 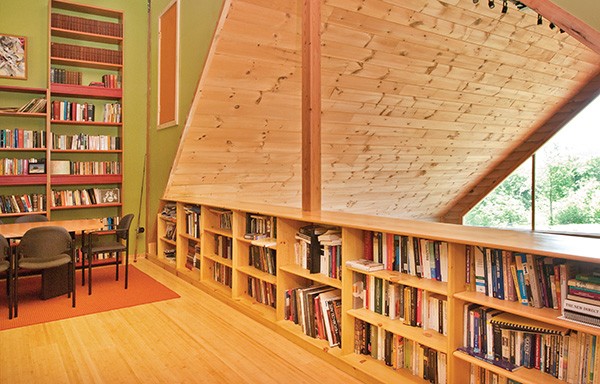 "Aside from the terrific unspoiled wilderness feel of the area, and the wonderful neighbors, the best thing about owning a home in Chichester is the opportunity to belong to the Chichester Property Owners Association," says Marrazzo. "It's like a private club, with about 100 members, representing about 35 different families, mostly descended from people who owned summer places here in the 1940s."

The Chichester Property Owners Association costs about $300 a year in membership dues, and maintains a rustic clubhouse on the creek with swimming docks and picnic facilities. There are several big annual events every year, including an Independence Day cookout. "Hiking down to the clubhouse is our daughters' favorite thing to do," says Belen. "It's about three-quarters of a mile away, but we can get there from our property, and it's just been a really fun way to explore together."

They chose log home construction because "we felt it would best blend in with the roughness of the Catskills," says Millan. The exterior of the house is pine log but, for the most part, the house is much like a standard post-and-beam, with large windows to bring the nature inside. The couple alternated living in Manhattan and the Catskills, but soon they were able to move in, and for several years the family lived year-round in Chichester.

During that time, Millan discovered R&F Paints in Kingston, and began painting encausticly with beeswax using R&F's acclaimed handmade pigments, much loved by Hudson Valley artists. A prolific and recognized encaustic painter, Belen has given a number of classes and seminars at various venues in the Hudson Valley, and exhibited in the US and Europe. She maintains an artist's website, Belenmillan.com.

"We were very busy with the children and building our exchange-student enterprise, and the house was big with wonderful views, and we had lots of parties and lots of houseguests," says Marrazzo. "But by 2009 we realized that we weren't using parts of the house as well as we could, and that we really wanted to create a master bedroom and bath downstairs that would be very private and romantic. That's when we found Allan Skriloff, an expert space planner with a log home in Mount Tremper, whom we basically met via word of mouth through a Tinker Street business owner in Woodstock."

Like Skriloff, whose home was featured in Chronogram in March of this year, the Marrazzos love living in a log home, but otherwise seek to avoid the associated kitschy design bromides, such as a chandelier made of antlers. "We wanted to cut back on some of the log interior-design features by adding more sheetrock, metal, and other contemporary construction elements. Allen helped us transform our place from so-so to great on the inside," says Millan. 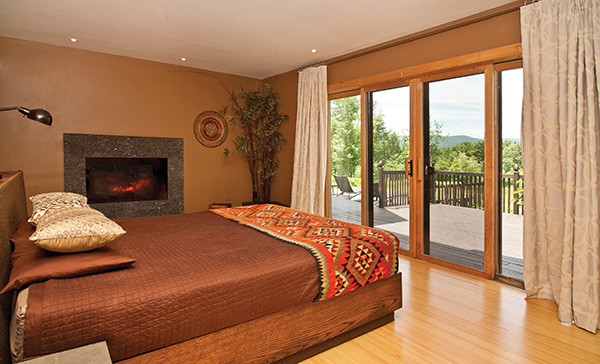 Skriloff recommended the Marrazzos erect a freestanding closet in the large downstairs bedroom to create a feel of intimacy in a large space and also to add storage space. A dining table made from reclaimed barn timber was deemed too small for the open-concept kitchen, dining, and living area, and was chopped in half to create the vanity used in the master bath. The existing stove hood was similarly deemed too small and replaced with a much larger model; some of the downstairs exposed pine beams were encased in metal purchased from Universal Metal Fabricators Inc. in Kingston, formerly known as Universal Road, to give the house a more loftlike look. 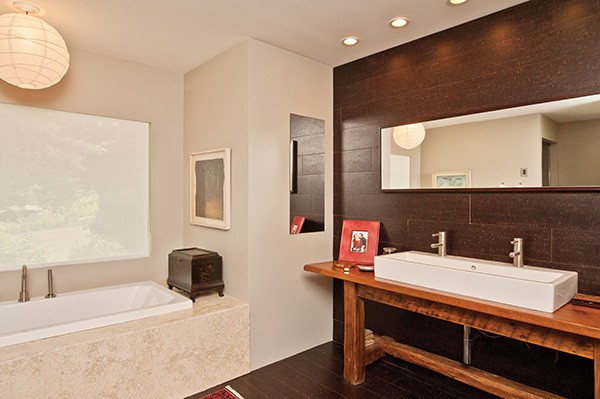 Large panels of sheetrock, painted in bright colors that pick up tones in the landscape, were also added to some interior walls. The upstairs guest bedroom was converted into an artist's studio for Millan, ending its rather illustrious winning streak as a baby-making retreat. "We've had several pregnancies happen as a result of staying in that guest room. People from the city would come up and tell us they are early risers, and then they would get here and we wouldn't see them until noon or so," laughs Marrazzo. "I think it has something to do with being so close to nature up here, plus we do have a lot of privacy." 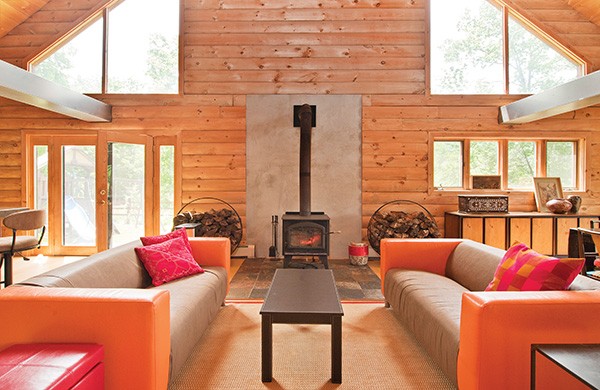 July is their busiest month. Not only are there a number of students in the US and Europe actively participating in various types of exchange programs, some home based and some involving sleepaway and other types of summer camp, but Marrazzo must also interview potential host families for the forthcoming school year. "We wanted our daughters to grow up bicultural, and so far, so good," Marrazzo says. "They go to school at the Lycée Français and then spend a few months in the Shandaken public school system, but it's becoming more difficult to do that as they get older. We decided that we would be spending less time in the Catskills, and so we've just begun to think about downsizing. The house is not listed yet, but we're thinking about it, and in the meantime, we plan to have a very busy summer, and invite over everyone we know to enjoy this place while we still own it."

More information about Skriloff's space-planning and design business can be found at Interioranalysis.com.

UC2040: Helping Makers and Creators Elevate “Made in the Hudson Valley” Sponsored