So, one very hot autumn night the couple reached a breaking point. While Doornbos was out, Diani got online and googled "historic house" and "New York," stumbling right onto the property's listing. When Doornbos returned home that night she shared her find: He was immediately intrigued. Doornbos suggested they go see it; Diani said she'd already booked tickets. The two flew out the next weekend, knowing the home was about two hours outside of New York City, but not much else about the area. After their realtor gave them a tour and some private time to walk the grounds, Diani asked her husband, "So, do you love it?" He looked back at the house and replied, "I feel like I never left. It really feels like we are home." Diani felt the same way. The two went in to confirm a meeting with the realtor for the next day. But there was just one last detail: "Uh, where
are we?" asked the couple.

The realtor suggested dinner at Gaskins in Germantown, to give them a taste of the area. They loved the meal, and every subsequent return trip to the East Coast revealed some new treasure, everything from housewares stores, to antique shopping, to the friendliness of their new neighbors, have enticed them to spend as much time as possible in the house, and in the area. "It's just been this lovely unfolding of incredible experiences, things, place and people," says Doornbos. "We thought it would take some time to get everything together and that we'd only be here periodically. But we fell so in love with it." The couple decided to begin the home's structural renovations right away, and began running the DIANI business remotely from Germantown part-time.


With the intention of keeping everything "as period as possible," but updating the house for functionality, they began by tearing up the ground floor. Built into the side of a hill, the ground floor space was often flooded, so they installed french drains to divert the water. Then then installed radiant heat under four inches of concrete and are now deciding between bluestone flooring or period brick as the final layer of what is now their dining room floor. They also plan to install a glass front wine cellar in the corner. The giant ground-floor hearth needed some repairs before it was fully functional. Doornbos and Diani replaced the stone flue and relaid the interior fire brick to create a working fireplace, but left the original blackened hearth intact.

Although a 1950s addition, the downstairs kitchen incorporates original pieces from the home's early days. White cabinetry and wood countertops provide ample space for meal preparation and are well positioned under windows with views of the grounds. White interior shutters swing down to preserve heat in the winter and period brick floors complete the space. A large wooden hutch, an original piece transplanted from another area of the house, takes up an entire wall, providing storage.

Upstairs, the home's three bedrooms are already very livable. Understated and cozy, both rooms have white planked walls, large interior shutters and stained wood flooring. The couple hopes to remove a large mirror lining the narrow hallway ("A gift of the 1970s," Doornbos speculates) and remove an interior wall to reveal the original bluestone construction behind. After that, the couple will replace the home's roof and seal up the third-floor attic, transforming the space into a master bedroom suite. 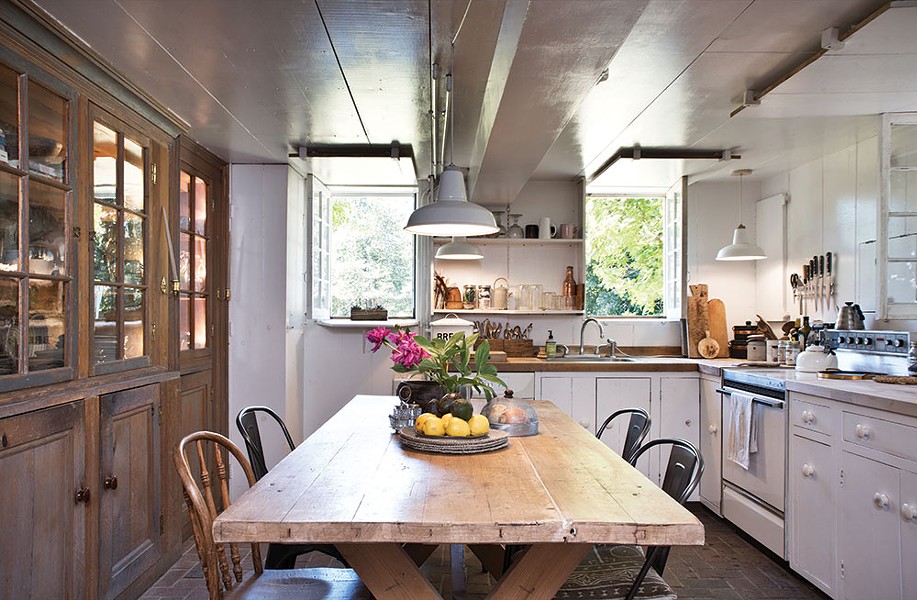 For now, though, they are relishing every step of the process, savoring the chance to get to know their new home, and the new creative directions it has spurred in each of their lives. Rediscovering his love of live theater, Doornbos has become involved with a writing group in Tivoli and found his newfound love of the region paralleled by his discovery of its theater scene. "It's all about community and feeling a part of something, regardless of your position in it. In a theater production you can be 'third spear carrier on the left' and you're still there for the rehearsal process and the performances—you're a part of the family."

Diani has loved the challenge of restoring and redecorating the historic property—a balance between staying true to the home's integrity and tradition while updating it to be livable in the modern age. "I like to take time to be really connected to the space that I'm designing," she explains. "I feel like it's almost a spiritual journey that can't be hurried. I like to listen to a room." Diani admits that she's very partial to historic homes and has already designed interiors for a few historic West Coast properties. She hopes her time in the Hudson Valley will provide new opportunities to bring her deft touch for comfort to other historic properties. About their beloved new house, they both take the long view: "We just want to caretake it and usher it into the next 250 years."