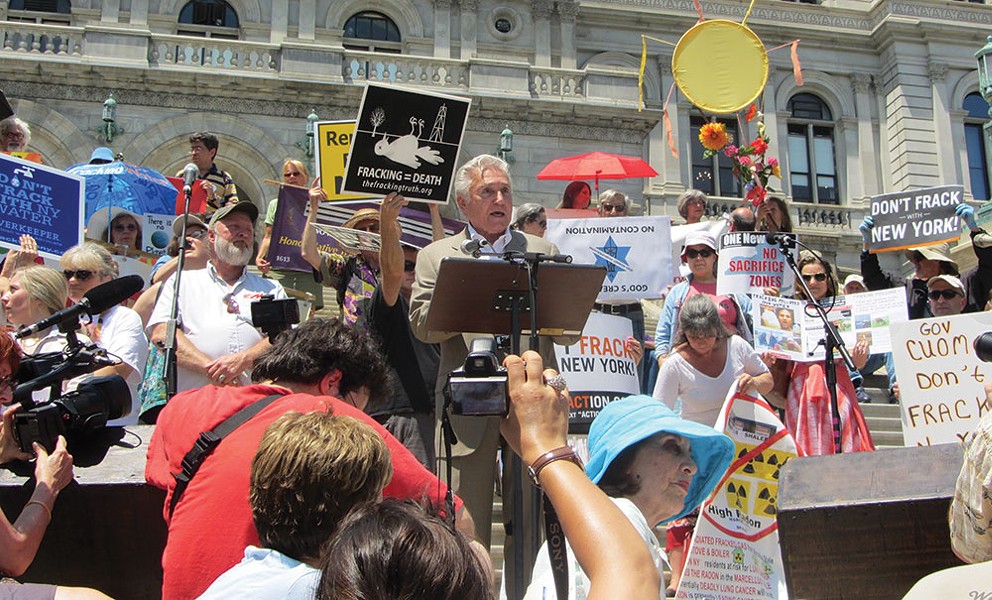 Former New York Congressman Maurice Hinchey is famous for his voice—a passionate, courageous voice that was an agent of change for decades, both locally and nationally. Before Hinchey retired in early 2013 after 38 years in public office, it was his voice that spoke up for environmental conservation, human rights, and economic opportunity, and that spoke out against polluting corporations, organized crime, and the Iraq War before it was politically popular to do so.

Yet Hinchey's family announced this summer that the 78-year-old statesman has been suffering for the past five years from a progressive neurological disorder called frontotemporal degeneration, which is gradually and insidiously eroding the language center of his brain—leaving the once highly verbal man at a loss for words. The announcement arrived at a peak moment during the American healthcare debate, as lawmakers were attempting to repeal and replace the Affordable Care Act. In Hinchey's story, the deeply personal becomes the political, underscoring the need for legislation that protects the rights of people like him who find themselves requiring long-term medical care from a team of skilled providers. It is also a story that gives insight into a neurological disorder that most people, even many doctors, have never heard of—and the plight of millions of patients who suffer from rare diseases, often misdiagnosed and relegated to the outskirts of our much-needed awareness and understanding.

When Words Slip Away

Maurice Hinchey—a onetime navy sailor, toll collector, cement plant worker, and literature scholar—has been no stranger to medical uncertainty. Just after announcing that he was running for Congress in 1992, following 18 years in the New York State Assembly, Hinchey suffered from what doctors call profound sudden hearing loss. His hearing went out abruptly, for no discernable reason, and came back intermittently. After a course of steroids, his auditory function returned completely—but only in his right ear. "He went through Congress with one ear working," says Hinchey's wife, Ilene Marder Hinchey. Then, during his last congressional term nearly 20 years later, Hinchey underwent successful treatment for colon cancer. It was a few months later, at the end of his term, that the family noticed a change in his language pattern. "Like many of us, he would lose a word every once in a while, but it began happening more frequently," says Marder Hinchey. 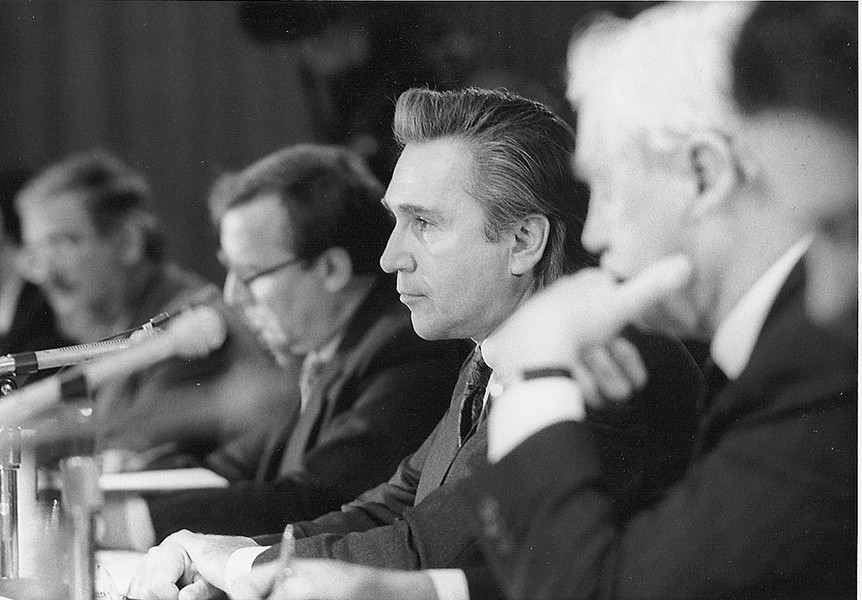 Certain words weren't just hard for Hinchey to find—they seemed to have vanished completely, as if erased from his consciousness. He went for testing, and a brain scan returned a diagnosis of frontotemporal degeneration (FTD), a progressive, fatal disease that gradually damages the brain's frontal and temporal lobes. After facing sudden hearing loss and a curable form of cancer, Hinchey was coming up against something unbeatable. Currently, FTD has no cure, nor does it have any treatments to slow or stop its progression.

"FTD is a form of dementia," explains Susan L-J Dickinson, CEO of the Association for Frontotemporal Degeneration (theaftd.org), based in Pennsylvania. "But it differs from Alzheimer's disease, the most common form of dementia, in three critical ways." Unlike Alzheimer's, FTD does not attack the memory center of the brain—instead, it can affect a person's behavior, language, and movement, leaving their memory and ability to recognize people relatively intact. It is also rare, with about 55,000 diagnosed cases compared to the 5.5 million people in the US with Alzheimer's. "A third way that FTD is different is that it hits people, on average, about 10 years younger than Alzheimer's," says Dickinson. "It can impact people anywhere from their 30s to their 80s. FTD is actually the most common form of dementia in people under age 60."

No two cases of FTD are exactly alike, as different variants of the disorder can produce very different symptoms. For Hinchey, the disorder started with a slow decline of his language function, manifesting in what doctors call primary progressive aphasia. As the disease has advanced, Hinchey has also developed a variant of FTD called Parkinsonian syndrome, marked by a decline in movement. "It's not Parkinson's disease," says Marder Hinchey, "but some of the symptoms are similar. They're not extreme. He might have a slight tremor in his leg from time to time, and he has some stiff muscles, affecting his ability to move." FTD is a slow disease with plateaus that people get to live with for a period of time. But the symptoms will eventually progress. "For much of the time [he's had FTD], Maurice was going out to dinner, having conversations, going to movies. It was only in the last year that he even began walking with a cane." But the plateaus can change very quickly, bringing health issues that require skilled, round-the-clock nursing care.

The Challenges of Long-Term Care

Watching a loved one suffer is painful for anyone, and talking about the effects of FTD on a man of such public stature is not easy for Hinchey's family. Yet his wife and children have decided to speak out, fueled by the hope that his story will help others. "We wanted to share with people his journey, his fight, and what he's been going through because he is so beloved; he is a man of the people," says the former congressman's daughter, Michelle Hinchey. With affordable healthcare for Americans in peril earlier this summer, the timing to make a public announcement seemed right. "Unfortunately, people facing the most debilitating diseases and needing long-term care like my father are the ones on the front lines of this much larger fight. It's not fair to them or their families."

Hinchey's family feels very fortunate that he can remain at his home in Saugerties—overlooking the Hudson Valley landscape that he worked throughout his career to protect—and receive care from a dedicated team of experienced caregivers, as well as family members. With gratitude for the support they have found, the Hincheys know it can be even harder for many others facing similar predicaments. "A long-term condition like this is going to cost most families more than they can afford," says Marder Hinchey. "It's easy to exhaust lifelong savings. Some people mortgage their homes to cover the cost of long-term healthcare. Many families feel they have no other choice but to divest their assets to get on Medicaid, which is the only public program that covers long-term care, whether it's in a nursing facility or at home. Some people have to choose between educating their college-bound children or paying for the healthcare of another family member. It's heartbreaking."

With a generation of baby boomers entering their golden years and falling prey to more chronic diseases, we could hear many more horror stories like these—especially if lawmakers succeed in making cuts to Medicaid or putting caps on treatments, as some have tried to do. "We should be doing everything we can to look out for the people who need the most assistance when faced with conditions like these," says Michelle Hinchey, whose father proudly voted in favor of the Affordable Care Act—seeing it as an incremental step toward the larger goal of universal healthcare. "My father believes that access to healthcare is a basic human right, and that universal healthcare is something we should absolutely be striving for as a country. We are behind so many other nations in that fight."

The Alzheimer's epidemic is already putting an enormous financial burden on our healthcare system, and a tremendous emotional strain on patients and their families. Yet in some ways, the emotional burden on people with rare diseases like FTD is even greater because of the isolation they feel, and the lack of understanding by the general public. "We need a broader understanding that not all dementia is Alzheimer's," says Dickinson. "It's not always a memory disorder, and it isn't always limited to senior citizens."

Since FTD can cause so many different and seemingly unrelated kinds of symptoms, it's a tough disease to pinpoint. While Hinchey mainly faces language and movement difficulties, other FTD patients may experience changes to their personality, behaving in ways their family doesn't recognize. "The frontal lobe controls executive function, personality, behavior, our social filter," says Dickinson. This is the part of the brain that tells us it's not okay to steal a muffin from the convenience store, or that stops us from telling the neighbor that she's wearing an ugly dress. People with the frontal variant of FTD have lost that social filter. In patients like these, the road to an accurate diagnosis is even more difficult.

"On average, people go 3.6 years before they get a diagnosis of FTD," says Dickinson. "Most of them have gone to a series of different physicians—GP, neurologist, psychiatrist—and gotten misdiagnosed. They're told that everybody forgets words, or everybody makes inappropriate choices at times. Maybe it's a midlife crisis. Why did he go out and spend the kids' college fund on a new Porsche? You don't necessarily think, 'Well, he's got a brain disease.' People often get misdiagnosed with depression, bipolar, Alzheimer's, or a movement disorder. It really complicates the journey for these families."

Dickinson's organization, AFTD, offers support networks across the country for families affected by the disorder; they also raise funds for research to find a cure. "Medical technology is advancing, and the research into this disease is tremendously exciting," she says. "We are working very hard to get biomarkers, something we can measure in the blood or cerebrospinal fluid for a more accurate diagnosis. There are no disease-modifying treatments for any of the degenerative brain disorders—Alzheimer's, Parkinson's, ALS, Lewy body dementia, FTD—but a breakthrough in any one of these diseases is going to help all of us."

Today Hinchey is where he wants to be: in the home that he built with his wife, surrounded by trees and nature, with windows looking out on Overlook Mountain. He still has his full mane of silver hair, and he is still a very dapper dresser. He may not passionately discourse about politics these days, but his progressive views and legacy surround him like an aura.

"Maurice has always been completely dedicated to improving people's lives," says Marder Hinchey. "I think he feels that's why he was put on this earth. If revealing that he has FTD can raise awareness and prevent people from being misdiagnosed, or help them plan for long-term care, then he continues having a positive impact on people's lives, which is what he set out to do when he first ran for office more than 40 years ago."

FTD is a very tough disease, but Hinchey wakes up every morning with a smile. "He's aware of everyone's good wishes," says Marder Hinchey, who has been sharing with her husband the many messages of support, admiration, and gratitude that have been flowing his way. "We're lucky that he's still fundamentally himself and is happy," adds Michelle. "He's still Maurice Hinchey. That hasn't changed."