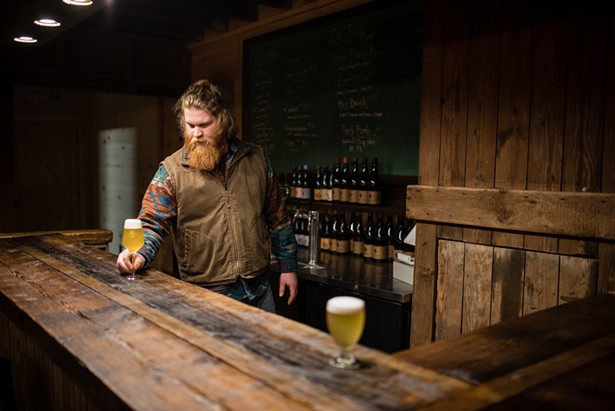 With Hudson River Housing projects and community-centered art initiatives like O+ and the Art Effect, Poughkeepsie has fresh blood coursing through its veins and is poised to spring into the next phase of its renaissance. This new life is invigorating the restaurant sector as well and catalyzing some major changes. Here are five(!) restaurants and one brewery tap room that are new to the Poughkeepsie dining and drinking scene.

Here are five(!) restaurants and one brewery that are new to the Poughkeepsie dining and drinking scene.

Coppola's at Liberty and Main


The Coppolas have a culinary legacy in Poughkeepsie that dates back to the ’60s. After five decades, two generations, and lots of moving around, the story came full circle in December 2017, when Luigi Coppola opened an Italian eatery across the street from his family’s first restaurant. Located on the corner, next to Brasserie 292, Coppola’s at Liberty and Main has prime real estate. The menu features all the classics you’d hope to find at a hearty Italian place—homemade lasagna ($10), chicken scallopini ($10), etc. as well as a build-your-own panini option, where you can choose from options like prosciutto, broccoli di rabe, and vine-ripened tomatoes. Open only on weekdays, 10am-4pm, Coppola’s is really a lunch place for those who can handle a rich midday meal without falling asleep at their desk later.


CIA-grad Ed Kowalski has been prolific in the last few years. The sandwiches, soups, wraps, and other light fare at his restaurant Lola’s Cafe and Catering, in Poughkeepsie, was such a hit that he opened a second location in New Paltz in 2017. Kowalski also tried his hand with fine dining with Crave Restaurant & Lounge in Poughkeepsie, but couldn’t quite hack it, and spot closed in March. Ever the entrepreneurial chef, Kowalski decided to pivot, and in June, he opened Lolita’s Pizza in the same location beneath Walkway Over the Hudson. The new eatery is serving up gourmet Italian food and thin-crust pizza with a rotating selection of toppings, cooked in a wood-fired oven. Past dinner specials have included mussels with white wine, coriander, and fennel seeds; and handmade Tagliolini pasta with littleneck clams, jalapeño, garlic and bread crumbs—our mouth is watering already.


Finally! The Mid-Hudson Valley can boast its first Moroccan restaurant. Earlier this month, husband-and-wife team Azeddine Yachkour and Mary Sweeney opened Casablanca in Poughkeepsie’s Little Italy district, in the former location of Delafield’s (once upon a time Caesar’s). The name of the restaurant is both an homage to Yachkour’s home city and to the timeless Humphrey Bogart film, stills of which decorate the walls of this cozy eatery. Open seven days a week, there is no reason not to try out this new spot and get some long-awaited tagine cuisine. Now, for an Ethiopian spot...


The Farmers & Chefs brand has been around for a while with their highly visible, fire-engine-red food trucks. Earlier this year, John Lekic, the culinary mastermind behind the food trucks (and Le Express French bistro), took over the former location of Andy’s Place and began renovations. Rumors flew—a new location for Le Express? A catering homebase? A new project altogether? Ultimately, the Albany Street location has become the permanent home of Farmers & Chefs. As the name suggests, the restaurant’s emphasis is on locally sourced ingredients from small-scale producers combined for maximum flavor, with a global influence. Lekic plans to close Le Express later this year, so fans of the French eatery should head that way for their last supper.


Once upon a time, 85 Main Street was the home of the beloved bar and Cajun eatery Spanky’s. The space sat empty for many years, a hollow vacancy in the hearts of Poughkeepsie-ites, but it is getting a new infusion of life with Vincent Delgado at the helm. Ahead of his opening this fall, Degaldo continues to work on renovations for his new restaurant Nova’s on Main Street, which will feature a New American menu. It’s hard to know exactly what that will look like but from the nascent Instagram account, so far we’ve spotted Asian pork lettuce wraps and a charcuterie board. Not a bad start.

Though you'll have to leave the city to get to this lil' brewery, it's worth the trip. A shining pinpoint on the map of burgeoning New York State farm breweries, Plan Bee operates a 25-acre property where they produce essentials like hops, grains, wild cultivated yeasts, fruits, herbs, and flowers to use in their small-batch brews, made onsite. After three years of renovations, the Plan Bee  just opened their barn last week, which has been reinvented as a rustic tasting room, and the taps are flowing. The "Barn Bar Room" is open every weekend. Don't miss the ribbon cutting party on August 3.

A post shared by PlanBeeFarmBrewery (@planbeefarmbrewery) on May 28, 2018 at 7:46am PDT

A post shared by PlanBeeFarmBrewery (@planbeefarmbrewery) on Jul 17, 2018 at 6:53am PDT