August 30, 2011
Last Updated: 08/07/2013 4:26 pm
comment
Most art lovers have heard of Camille Pissarro. But when asked to name their favorite Pissarro painting, they picture ... an empty canvas. “Pissarro’s People,” an exhibition at the Clark Institute in Williamstown, Massachusetts, seeks to fill that canvas.

In his own time, Pissarro was eminent. He was one half of the famous Salon des Refusés in 1863 (along with Cézanne): painters rejected by the academic Paris Salon. He was the only painter shown in all eight Impressionist exhibitions. In fact, some believe Pissarro to be the inventor of Impressionism. Cézanne called him “humble and colossal.”

Born in 1830 to Jewish parents in St. Thomas, then part of the Danish West Indies, Pissarro attended a Moravian school along with Afro-Caribbean students, until he was 12. Then he was sent to boarding school in France. When his schooling ended, Pissarro’s father wished him to enter his business, but Pissarro rebelled. At the age of 22, he took off to Venezuela, to work as an artist. By the age of 25, he was living in Paris; soon, he was studying with Corot and Courbet. In 1871, Pissarro married his mother’s maid, Julie Vellay, with whom he would eventually have seven children.

Pissarro was a lifetime anarchist, and his art reflect his beliefs. Often he painted agricultural tasks. “He believed in the nobility of manual labor, such as farming, and indeed he saw his own work as a painter as being no more elevated than that of the farmer. He used images of workers—often workers in the field, but other types as well—to illustrate his belief that labor could be harmonious with a life of health and leisure,” observes Kathleen Morris, director of exhibitions at the Clark.

Pissarro reminds us that peasants work together not from fear of a boss, but to achieve a collective goal. Also, he embeds a subtle feminism in his agricultural paintings, the women and men working in harmony. Other works show a future utopia reminiscent of Jehovah’s Witness art in which multicultural Christians are eternally picnicking on a perfect earth. But Pissarro imagined work even in a paradise.

Views of crowded rural markets, often done in gouache, convey serendipity and chaos. The Marketplace (1882) distracts us with the colorful headscarves of farm women engaged in pressing conversation. On market day, a village becomes momentarily a city.

This exhibit includes a remarkable document titled The Social Disgraces, a series of 28 pen and ink drawings executed to enlighten his young nieces on the evils of capitalism: a man begs in the street, drunks stumble out of a bar, a millionaire hangs himself, a family starves. The final drawing depicts an “insurrection.” This series has rarely been shown.

“Pissarro’s People” is the first show to study Pissarro’s interest in the human figure. From all accounts, the artist was a kindhearted man. “In his paintings, I see faith in humanity, openness to new ideas, and a desire to be supportive and empowering,” notes Morris. Pissarro refuses to exploit or glamorize anyone, even naked women. Perhaps nice guys finish last in painting, too. Without a massive, self-aggrandizing ego, an artist is ignored. (Is this one reason few women painters are famous?)

“Pissarro’s People” will be exhibited at the Sterling and Francine Clark Art Institute in Williamstown, Massachusetts, until October 2. (413) 458-2303; www.clarkart.edu/exhibitions/pissarro/content/exhibition.cfm. 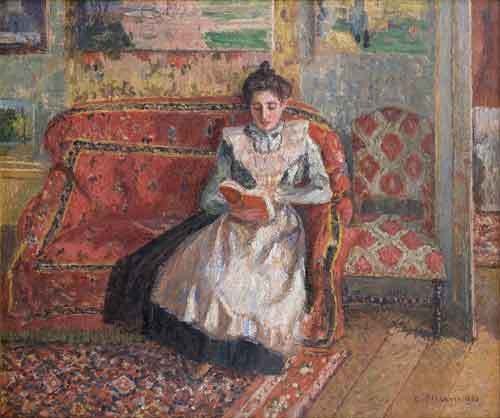