A Night With Neil Gaiman and Amanda Palmer

Return of The Eight Foot Bride 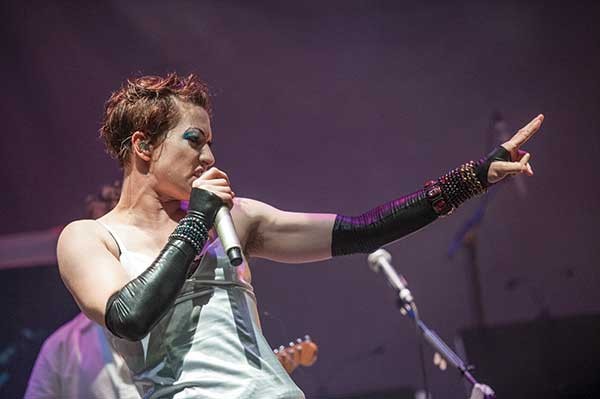 Amanda Palmer once earned her keep playing a living statue called The Eight Foot Bride. Palmer went on to become a successful musician, first as half of the punk cabaret duo Dresden Dolls, then as a solo artist, most recently releasing the famously Kickstarter-funded album Theatre is Evil. Palmer's, husband, Neil Gaiman, rose to prominence writing the DC Comics series The Sandman and subsequently defied all genres with his novel American Gods—as well as many other comics and novels. Eventually, these two souls met through a mutual friend. They collaborated, fell in love, and married (initially in a flash mob wedding in New Orleans, later, in an official ceremony held in the home of writers Ayelet Waldman and Michael Chabon). Palmer and Gaiman now collaborate in life, love, and sometimes work—and will bring their limited-run "An Evening With Neil Gaiman and Amanda Palmer" to Bard College on April 6. I tracked Amanda Palmer down via e-mail in Long Beach, California, where she had just given her much-lauded talk at the 2013 TED Conference.

Maggie Estep: Did you and Neil know each other's work before meeting? Were you in love with the books and the mind before the man? Was he at all intimidated by your exquisitely relentless persona before meeting you?

Amanda Palmer: Thank god, I didn't know his stuff. I knew of him. I knew he was the "famous goth-y comics-book guy"—that was it. I'd never read Sandman, never read anything. We always look upon this as a real gift and the thing that made our union possible. If I'd been anything of a fan, our relationship would have been doomed. He was familiar with my music and had a few songs of the Dresden Dolls on his iPod but wasn't a deep fan. So we were distant admirers of each other, curious enough to look, but we had a nice power balance.

ME: What was your first date?

AP: Our first official date was hilarious. Since we were both touring constantly, Neil came to LA for our "date" and booked a hotel next to the venue I was playing in. I was still getting over a relationship and not really ready to jump right in and be fucking like bunnies, so he was a gentleman and asked the hotel's housekeeping to make up a spare bed, since we'd agreed to hang out for the whole night. Instead of turning the couch into a bed, housekeeping just fluffed the pillows. So we came back form the gig and I was exhausted and was like, dude, I give no fuck, let's just go to sleep. And so go to sleep together we did, and had a nice, awkward cuddle, and that was our first date.

ME: What was the first thing you two worked on together?

AP: Our first project was what brought us together, before we even dated, it was the Who Killed Amanda Palmer art book. It accompanied my solo album; I asked Neil to write some short stories and captions. I was really surprised when he said yes, because he was famous and fancy and my budget was zero. But I think he was just fascinated by me and with my odd story. So he did it. And then he came to my house to work on it and the first seeds were planted for us to fall in love. The book isn't amazing, the design is very plain, and it's just a bunch of simple pictures of me, dead, in various situations.

ME: You work with other musicians, visual artists, writers, and with your army of ardent fans, but how is it different to collaborate with the person you're married to?

AP: Very different. Neil and I are actually really careful not to do big projects together. Big no-no. Our relationship is the most important collaboration. And we need each other to be able to complain about our work life. So big projects where we have to duke it out about creative decisions are like poison—we stay away. This album and tour that we did [An Evening with Neil Gaiman and Amanda Palmer] was very finite, very fun.

ME: Did Neil ever feel you were a bit like a mythical, magical being he would have invented had you not actually existed?

AP: In fact, we just attended the TED Conference together and they printed his name-tag accidentally as NEIL GAIMAN : WRITER : AMANDA PALMER. We all joked that he'd written me into existence for the TED talk.

ME: You are both prolific Twitter users. Has this ever engendered marital squabbles?

AP: Ha. I'd like Neil to tell the story of the "Cabaret" rehearsal. Over to you, honey. [Palmer starred as the Emcee in a 2010 American Repertory Theater production of the Kander and Ebb musical.]

Neil Gaiman: So... We were both in Cambridge. I'd agreed to meet some theater producers who wanted me to write something for them. And their pitch went on and on. Amanda was on a break from "Cabaret" rehearsal and waiting for me in a nearby Starbucks. And I was not coming as her break evaporated. So she told Twitter.

And I got upset. I said it's hard enough being a couple without having the things that don't work being announced to half a million people. Amanda agreed. And now if either of us screws up we fix it with the other one, without feeling like it's happening in public.

ME: Do you sometimes serenade Neil on the ukulele when he is feeling restless or sad? Does he read to you from his works-in-progress and ask for feedback? Do you do the same to him? Do you have squabbles about said feedback if it is given?

AP: We're very careful with each other about our work and we're in a constant learning process about when feedback and sharing is helpful or too invasive. We're really similar in some ways but very different in others. I see us as having really similar engines but very different car bodies. Neil will often read me what he's written when he's working on a project but I'll rarely play him a "draft" of a song; songs are different. I don't ever really want lyrics feedback, unless I ask very specifically (like, "What's a two-syllable rhyme with x-x-x"?). I'll send him blogs and writings to edit, and we'll even edit each other's tweets. Especially when we're pissed off at people.