A New Home for Unsung Shrubs 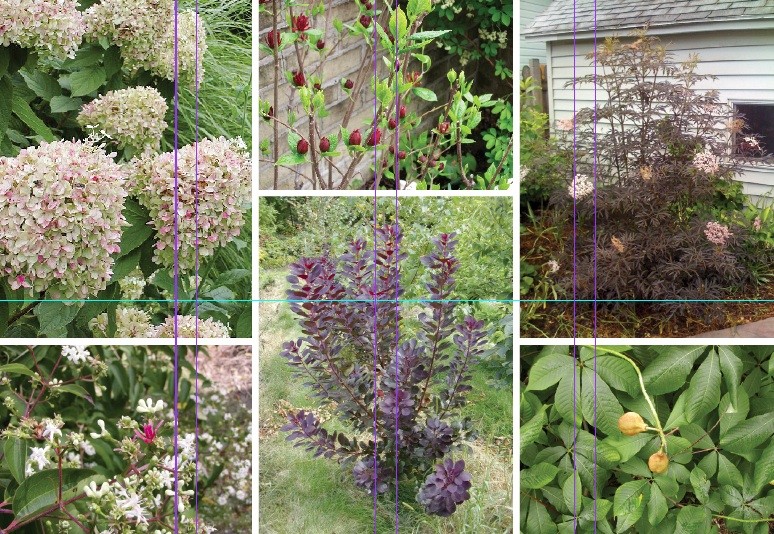 Shrubs have moved out from the stuffy foundations of our homes into our free-spirited perennial borders. Mixed with perennials, annuals, and bulbs, shrubs give beauty all through the growing season, especially if they are given enough room to express themselves (seldom the case along house foundations!).

“In the perennial border, you can use shrubs to cheat,” says Cornell horticulture professor Nina Bassuk. “For instance, a Goldmound spirea fills space with bright foliage all season yet doesn’t require as much attention as the perennials needed to fill the same space. A burgundy-leaf Diablo ninebark has a pleasing vase shape and provides a beautiful foliage backdrop for herbaceous plants. When either shrub comes into bloom (pink flowers on the Goldmound, white flowers on the Diablo), it’s a bonus.” In Dr. Bassuk’s five-acre home landscape outside Ithaca, she has been employing this technique as a way to gradually reduce maintenance, and the results are no less showy.

For this border-enhancing purpose, look for shrubs that give visual interest in at least three seasons (four would be even better, as in winter hardy selections of boxwood like Winter Green). Colorful foliage is a real plus, or if the leaves are green, they should be a handsome deep or glossy green. Late summer or fall flowering is desirable, as it brings bloom at an unexpected time. The overall habit, or shape, of the shrub should be attractive (granted, some pruning may be needed to assist).

So long as one is breaking convention and eschewing tired foundation plantings, one might as well look for shrubs that are unusual and underutilized as well as being tough and lovely. Here are some to consider.

Purple Smokebush (Cotinus coggygria Royal Purple, and other cultivars) is so named for its colorful foliage and fuzzy flowers that collectively bring to mind plumes of smoke. It is a great alternative to the prickly, invasive, and ubiquitous purple barberry and the less-than-stalwart purple sand cherry. Purple smokebush can get to be 10 feet tall and wide, but cutting it back hard every other year in early spring will keep it more compact and healthy and ensure the best foliage color (although in those hard-pruning years, the flower show will be greatly reduced). Full sun is also necessary for deep color. Smokebush tolerates a range of soil types and pH and can withstand periods of drought like a real trooper.

Sweetshrub (Calycanthus floridus) is a favorite for Francis Groeters, owner of Catskill Native Nursery in Kerhonkson. “Sweetshrub is one of our best native plants that isn’t used nearly enough,” says Groeters. “It’s not very showy from a distance, but upon closer look, the deep maroon flowers pop out against the deep green leaves. It’s not picky and grows in sun or shade, good or bad soil. It’s drought tolerant, disease free, and deer resistant. It also smells wonderfully like mulled cider, even when not in bloom.”

Seven-son Flower (Heptacodium miconioides) gets really big—15 feet tall and 8 feet wide—and can be trained as a large shrub (multistem) or small tree (single stem). Each flower cluster contains seven tiny white flowers. It blooms in late summer and fall, at a time when so many conventional shrubs have already packed it in. The flowers are very attractive to butterflies and bees of all kinds, and you can expect a blooming seven-son to fairly vibrate on sunny days. After the petals fall, showy fusch-ia calyces (outer whorls of protective, modified leaves) remain behind. The leaves are deep green and very handsome.

Penny Augustine of Augustine Landscaping and Nursery in Kingston has a seven-son specimen in her home gardens that gets a lot of attention from visitors. In her case, it’s been trained as a small, multistem tree. “Growers will give me unusual or marginally hardy things to try out,” Augustine says. “I’ve been collecting these underutilized plants for 30 years, and the seven-son is one of my favorites. It’s beautiful all seasons, and the peeling bark reminds me of a birch tree.” Some have also likened the bark to that of crape myrtles in the South.

Bottlebrush Buckeye (Aesculus parviflora) is a “handsome shrub that can be used in both the wild or tamed landscape,” says Francis Groeters. “It has an attractive broad-rounded habit, interesting dark green foliage, and wonderful flowers that spike upwards. It often suckers and forms extensive colonies by underground runners, especially in moist, shady situations, so give it some room to be the best it can be. We like to use it for privacy plantings and in hedgerows, as well as for lawn specimens when space allows. We have a large example at the nursery that hums with insect life when the flowers are in bloom.”

Limelight Hydrangea (Hydrangea paniculata Limelight) is my favorite among hydrangeas—and perhaps stretches the criteria of underutilized, because more people have discovered it each year since its commercial release in 2002. In late summer, the large, long-lasting flower panicles emerge white, then turn chartreuse-green, then turn rose-pink in the fall, then fade to a handsome wheat color for winter interest. At any stage, they make excellent dried flowers.

Unlike some other hydrangea types that flower on last year’s buds (buds that can then be susceptible to winter damage), Limelight flowers on buds formed in the same year. This means you can cut it back hard in late winter or early spring and still have a fantastic flower show. It can get to be eight by eight feet or more, but if that’s too big for your border, you can try the new Little Lime, which is a third to half the size.

Limelight can thrive in less-than-ideal soils and is not readily susceptible to diseases or insects. It’s won numerous awards, including the 2008 Royal Horticulture Society Award of Garden Merit, but it promises not to forget the “little shrubs” as it climbs to fame.

Black Lace Elderberry (Sambucus nigra Black Lace) has gorgeous, ferny black foliage and bears light pink flower clusters in late spring. Like all elderberries, it can get quite large (6 feet tall by 8 feet wide), but unlike its green-leaf, native counterpart, Sambucus canadensis, Black Lace has a more wide-spreading habit. However, like its green-leaf elderberry cousin, it can tolerate wet site conditions and some shade. Birds like the fruits. Regular pruning keeps the foliage deepest, glossiest black. “Anyone who sees this shrub on display is going to want one,” says Penny Augustine. “They just need to discover it!”

Shrubs in general are often overlooked when it comes to a specific site condition in our landscape: seasonal flooding. Many of us despair of having woody plants in natural or created lowlands or swales. For these sites, there are shrubs that can tolerate seasonal “wet feet.”

However, as Nina Bassuk explains, these places are not always wet; by late summer, the same site can be quite dry. “The key to successful plant selection for these sites is to choose plants that can tolerate wet and dry periods,” she says. Here is a list of shrubs that Dr. Bassuk recommends for that very dichotomy: