The Ace of Space 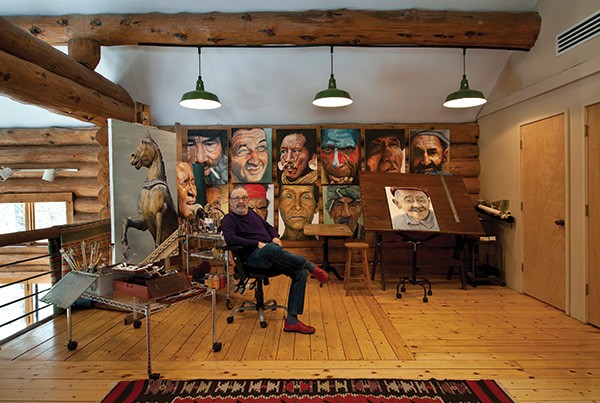 Designer, painter, and real estate investor Allan Skriloff is an expert space planner. His three-bedroom, three-bath 2,000-square-foot log home in Mount Tremper, which he designed, almost flawlessly marries technique with amazingly direct style. The modernistic cabin, built in 2000, is made of hand-peeled red pine from Michigan.

In addition to being a showplace for precise craftsmanship, Skriloff's cabin dramatically juxtaposes textures and scale. The strong horizontal lines of the logs lend a masculine, ordered feel. The logs are round inside and out, with a half-moon-shaped groove on the bottom, and custom-fitted to one another. This is also known as the "chinkless" method, as there is no need for plaster. It's an extremely old technique, and very labor intensive.

A riverstone surround behind the renovated 19th-century woodstove, a materials element that's repeated in the foundation and exterior columns. The masonry has a slightly surreal vibe, like a movie star's cinematic "morning after" hair, a contrived and picturesque messiness. That's because Skriloff hired an expert stonemason to construct the facings and supports superquickly, without a lot of measured precision. Consequently, the slightly free-form masonry accents seem as if they were built by a charming farmer long ago.

There's no trite Adirondack kitsch in Skriloff's log home. Organic and minimalist on the whole, in this designer's abode, one discovers careful nooks replete with surprising collections—round antique silver hand mirrors, vintage baseballs in a basket, a photographic collage of loved ones in a dressing room. It's modern without being chilly.

"The problem with most log homes, from my perspective as a designer, is that the decor tends to be so expected–you know, the taxidermy trophies on the wall, the rocking chairs," says Skriloff. "It's boring. Too much of anything is never good."

Skriloff grew up in the Forest Hills section of Queens. He attended Pratt Institute, then transferred to Parsons School of Design. He designed custom furniture and interiors for top Manhattan firms and then began renovating brownstones on the Upper West Side. He also implemented a custom closet department for Pottery Barn—the nation's first to offer wire shelving designed and cut to order. Six of his paintings appeared on "The Days of Our Lives" soap opera over the course of several episodes set in an art gallery. Several of his "Oil Worker" paintings, from his "Men at Work" series, decorate the Precision Drilling Oilfield Services Inc. office in Houston.

Currently, a selection of Skriloff's figurative work is on display in the lobby at The Emerson, a nearby resort hotel with a spa that's open to the public. The Emerson found Skriloff through an artist friend; he's also represented by Carrie Haddad Gallery in Hudson.

Skriloff's cabin is set on eight acres, and bordered by state land on three sides. It's proven such a fulfilling place to live, entertain, and paint that last year, Skriloff finally just rented out his Manhattan apartment. "I loved the way it looked, but never really used it anymore," he says.

Approaching 70, Skriloff's an avid hiker and skier; in fact, his first upstate country home was in the Hunter Mountain area. He does still travel—he loves Munich and Amsterdam, and has friends and former clients all over the world. He just got back from a hilarious trip to Palm Springs that featured hiking in the desert nude. But these days, for him, there's no place like Mount Tremper.

A look at the rich wooden interior of Skriloff's home.