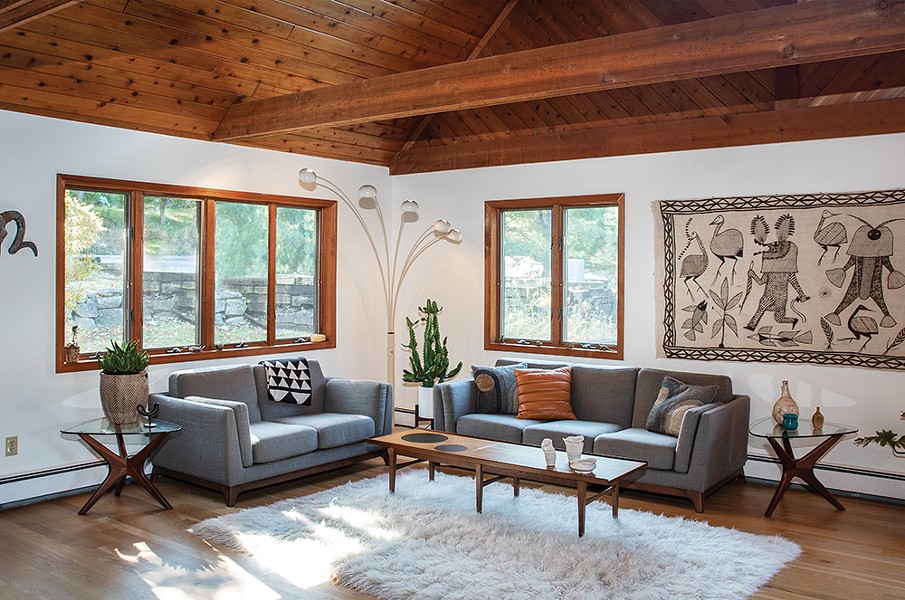 When Hilary Davis and Jordan Moser embrace the aesthetics of a particular era, they don't do it half-heartedly. Case in point: After fully refurbishing the A-frame cabin they bought on Mount Beacon, they went gaga for Midcentury Modern design, and the house is a showcase for the couple's ever-growing, eclectic collection of pieces from that "playful, more idealistic era." Over the past three years, Davis and Moser have scoured the four corners of the Hudson Valley. They've searched through basements and antique shops, through yard sales, Craigslist, and eBay, all to rescue the neglected, rejected artifacts—futuristic furniture, whimsical light fixtures, distinctive art, and even bygone technology of the optimistic, utopian post-World War II era. 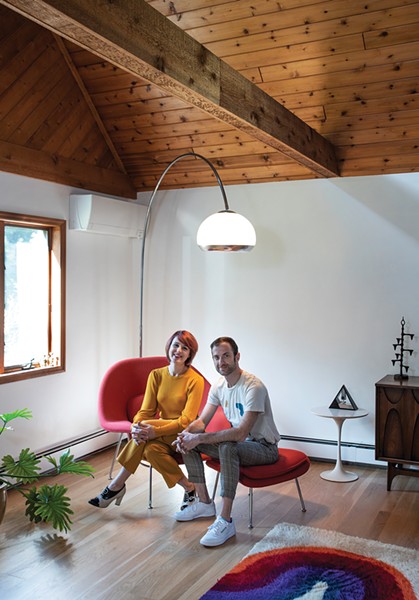 There might have been a hint of the lengths Davis and Moser would go to in restoring both their home and its contents, in one of their other collaborations—the synth rock band Tygersounds. Emulating the buoyant tone of the '80s, the trio "takes some of the cooler sounds from the decade, adds a modern twist to the vocals, and leaves out the cheese," explains Moser, who plays synthesizer and sings. Davis, who also plays synth as well as electric violin, sees the correlation. "I think it's the same reason that we're drawn to Midcentury Modern design; the band is a kind of sonic equivalent—it's nostalgic." 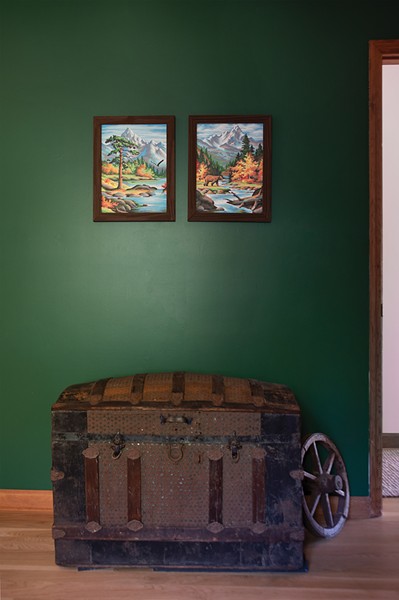 Like Tygersounds, their home is a creative collaboration. It's where Davis's eye for style and formal design education meets Moser's dogged persistence in tracking down pieces and then painstakingly refurbishing them. "It's not about buying the most expensive or famous pieces," explains Davis. "It's more, 'Do we love the story behind it? Do we love the character? Do we love the intention of the designer who made it, or even just how the shape makes us feel?'" Through their joint vision and combined talents, the couple have assembled a home where each restored piece has its place in a comfortable, authentic whole. "It's so meaningful to us to have an original piece," says Davis. "Even if we have to find something and fix it up. We feel like we've saved it for its historical value."

A Frame of Possibility

It was the Hudson Valley's effusive atmosphere of creative experimentation that led Davis and Moser upstate. Previously residents of the East Village, the two first stopped in Beacon on their way to Fishkill for a friend's winter solstice party. "We had heard about Dia, Main Street, and the Roundhouse," explains Davis, who originally hails from Minneapolis. They loved the region's abundant natural resources, the plethora of independent, creative businesses, the farm-to-table food scene, and the area's rich musical roots. "There's an entrepreneurial, exciting spirit in the Hudson Valley," says Moser. "If you want to do something cool, you can do it. It's affordable and the community is open to it" 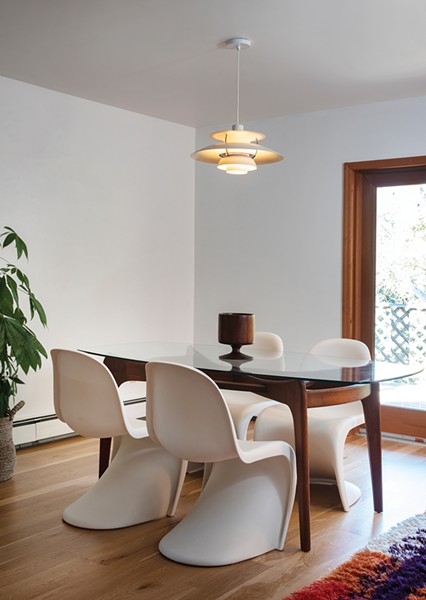 They continued to explore the wider region on weekends, but during their jaunts they were always drawn back to Beacon. "Every time we visited Beacon, we discovered a new hike, brewery, or cozy spot that made it harder to leave," remembers Davis. When they realized a part-time commute from Beacon to the city was doable both work in the advertising field: Davis as a graphic designer; Moser as a sound engineer—they crunched the numbers and realized buying a home in the area was actually feasible. 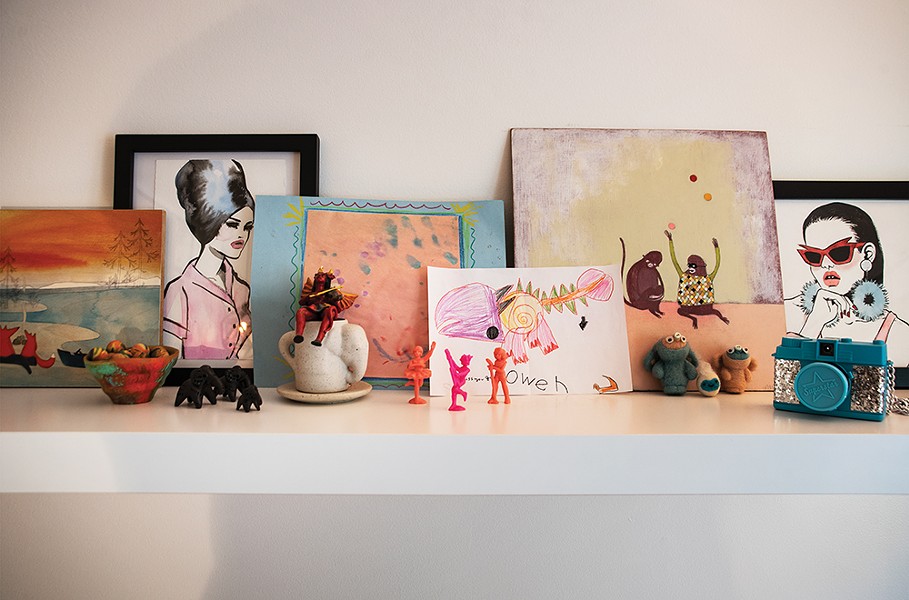 "We thought we were going to find a cute 1950s, industrial-era home with a fenced-in yard within walking distance to Main Street," remembers Davis. "But we weren't connecting to any of the houses or the architecture in town." After months of looking, they heard about a place on Mount Beacon—a neighborhood they hadn't even realized existed. "As we drove up the mountain for the first time, we thought, 'we can't live all the way up here, we'll need to get a car.'" However, from the moment they first walked into the house, they loved it. Built in 1990, the three-bedroom, two-bath Swiss-style ski chalet was an architectural novelty. Even though the rooms were filled with dilapidated furniture, the refrigerator still contained rotting food, and beach balls hung from the ceiling rafters, the two could see evidence of the original owner-builder's craftsmanship. The open first-floor living room, dining room, and kitchen were centered around a giant bluestone fireplace—built from stones gathered from the surrounding property, they later discovered—that reached all the way to the double-height knotty pine vaulted ceilings. "We loved how the surrounding nature was integrated into the house," says Davis.

Years of neglect had left the house in a sorry state. It needed a new roof, the exterior siding had been torn up by woodpeckers, the chimney needed repair, and many of the windows needed replacing. Even though it would require extensive rehabilitation, the couple felt they had to rescue it. "We wanted to restore it to its former glory," says Moser. In 2016, the two took the plunge. They bought the home, let go of their tiny apartment and sold "all our furniture from Ikea that we knew wouldn't survive the move," says Davis. She even quit her corporate job and the two put their band on hold just so they could focus on the house. "We were in over our heads for sure," explains Moser. "But it was also very exciting."

The next few months were spent sleeping on an air mattress in the middle of the floor while they oversaw the home's overhaul. Their real estate agent, Jon Miller of Jon Car Realty, connected them to local contractors to repair the exterior damage and the two tackled as much of the interior work as they could handle themselves. Inside, they ripped up the carpets and worked with Strictly Hardwood to restore the hardwood floorboards throughout the open first-floor living, dining, and kitchen areas, as well as an adjacent office and guest room. Then they repainted all the walls and replaced every light fixture, both upstairs and down.

The couple tore out the existing kitchen and in its place created a sleek monochrome enclave with playful pops of color. They added walls of gray cabinets, off-white counters and new appliances, incorporating intermittent touches of orange paint for flair. When a chandelier wouldn't fit into their dining room, Moser deftly disassembled the piece and the two hung the individual pendants from a cement track in the ceiling to create track lighting over the countertops. He took a similar innovative approach with the second-floor loft space, open to the living area below. By reappropriating acoustic soundproofing panels from a Manhattan studio, he created a home studio filled with instruments and recording equipment. The remaining second floor has a large master suite with vaulted ceilings, a full bathroom, and a walk-in closet running the length of the house.

As the couple restored the house, they began to explore ways they might furnish it. With little left from their Manhattan apartment, they started frequenting retailers for ideas but were disappointed in the quality of materials they found. However, while shopping, Moser was always drawn to the same distinctive colorful, playful motif. Moser didn't even realize there was a name for what he liked until Davis pointed out all the pieces he gravitated to originated from the Midcentury Modern design movement. "The designers of that era were all multimedia artists and renaissance people," explains Davis. "They would design furniture, houses, lighting, and all sorts of different things." One night the couple asked each other, "What if we just decorate everything this way?" Rather than buying knockoffs, they began searching for pieces they could both afford and refurbish. 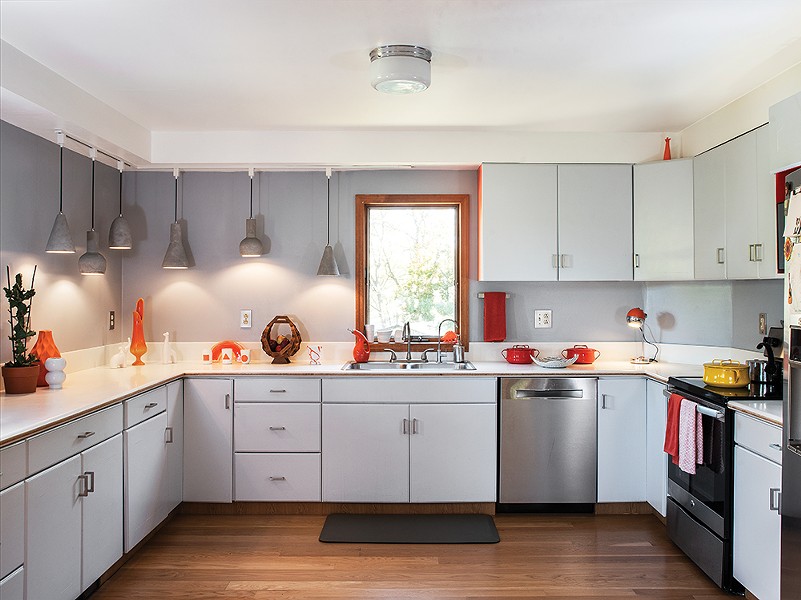 While they've found many original pieces to match their idiosyncratic home ("Good thing we got that car," says Moser), what they've really discovered is a vein of inspiration. "Sometimes we find a piece and then we immediately get ideas for what goes around it," he explains. "We find a chair or a sofa and then, all of a sudden we have a shape or a color scheme to work from." That, in turn, sends them back out searching. "It inspires play," says Moser. "It lifts you up to be surrounded by objects that were designed to be fun. It makes you happy."