The son of a painter, teacher, and board member at the 1708 Gallery in Richmond, Virginia, Pierre Bowring grew up immersed in art and attending gallery openings. In high school, he took up ceramics and painting. “That art teacher was crazy,” he remembers fondly. “‘Here’s our account number; go down and get as much paint as you want.’ I went and loaded up—and I knew how to pick the good stuff! It came to $400.”

Bowring was an art major at Virginia Commonwealth University, studying painting, when he happened to walk into the glass workshop. “The energy was wild," he recalls. "They’re working with a big roofer’s blowtorch, just huge and bright and loud, and I realized that was my tribe in there, sweating and laughing, cranking music, and blasting away on glass.” 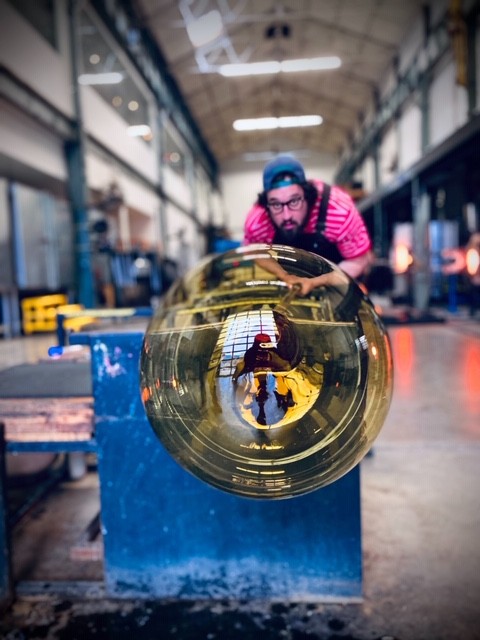 Bowring wanted in, but there was a four-year waiting list. Mom being a VCU instructor helped; he had a waiver in 24 hours, and the die seemed cast. He graduated with a degree in painting, “but glass was it for me,” he says.

After college he puttered about, cooking in restaurants to pay the bills. Cooking and blowing glass, he says, have certain traits in common: it's detailed, repetitive, hot, and stressful work, and in both cases, timing is everything. But the kitchen didn’t quite do it for him. “I’d just moved to Charlottesville,” he recalls, “and I was on my first date with this beautiful print-maker. She asked if I made any art.” 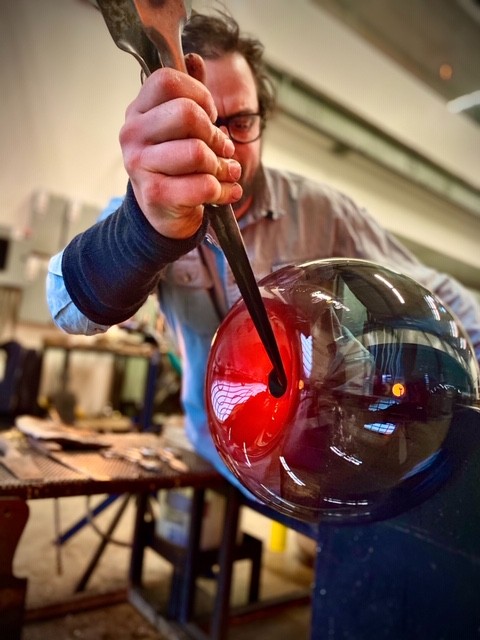 Well, he said, he used to blow glass. Five years ago. “She told me to take a day off and try blowing glass," he says. "I did, and the results were awful. Horrendous and hilarious. She saw something, I guess, and got me signed up for the Penland School of Craft in North Carolina. She helped me with all the written parts, and for whatever reasons, they accepted me as a work-study student.”

Then he found out the cost of room and board, and the hill looked once again insurmountable until his dad stepped up. “He said, ‘This is going to change your life, I know it,’ and wrote the check just like that.”

At Penland, Bowring discovered a seriousness in himself that he hadn’t had as an undergraduate, perhaps thanks to those 80-hour weeks in kitchens. He rose early, begged for extra solo studio time, became an assistant. “I worked with astonishing people,” he says. “It was the most incredible foundation, and I was ready for it.”

Back in the real world for two months, he landed a job with Anthony Corradetti at Corradetti Glassblowing Studio & Gallery in Baltimore, then began working and selling independently around Washington, D.C. That’s what he was doing a year ago, when the email arrived telling him that Niche Modern, a boutique lighting brand in Beacon needed a head of production.

Settling into the Hudson Valley

Bowring may well be making his own luck along with creative barware. He says his parents always emphasized gratitude and good decisions and he tries to do the same—like marrying the lovely printmaker who nudged him back into glassblowing. Jennaway Pearson, whose independent work has been collected in numerous prestigious places, now maintains a spot at Atlas Studios in Newburgh. The couple are expecting their first baby in a few months.

Moving to the Hudson Valley turned out to be a good fit, and Bowring—now a City of Newburgh resident—says he keeps discovering more reasons to celebrate his move upstate. “We have an apartment overlooking the river, and the person who renovated the place put a lot of time and money into doing it right—it’s glorious,” says Bowring. “We’re looking to buy eventually, and thinking about Newburgh. There's so much going on here. What with the baby coming, I asked a friend about safety—mind you, we’re having this conversation in a gorgeous church he’s renovated— and he said in 10 years he’s never had a problem. And there are things about Newburgh that you won’t find anywhere else.”

Besides the drinkware that's his current focus, you'll find Bowring's work in various places: handlown glass bottles at Star Bright Farm, a glass dome for a charcuterie board at christina boy design. His online shop also offers an array of vases, mixing bowls and glasses; while his Instagram tells the story of his adventures in this high-pressure-but-oh-so-delicate medium.

Just in the first week of 2020, Bowring's been accepted as a vendor to sell his own work at both Phoenicia Flea and Field + Supply. “It’s crazy,” he says. “Those were two of my three New Year’s goals, and they happened in one week. I’ve also been doing some stuff with Pablo [Weinschenk] at the Woodstock Art Exchange, which is wonderful.” So keep an eye out for Bowring Glass at this season’s better markets and say hi to a happy man. “I feel like I’m in the right place at the right time and pathways keep opening,” he says. “My job at Niche has taught me a hyper-awareness of every tiny detail and flaw,” he says. “I don’t just make stuff and assume, ‘someone will like it.’ It has to be as perfect as I can humanly achieve.”

His eventual goal is to open a teaching studio sometime in the next couple of years, passing on the gifts he received at Penland. "Of the 80 people I met there, I'd say 10 or 15 are actually pushing the boundaries of the medium," he says. "At Niche, I'm the final guy; everything has to go through me and I'm picky. I just had an email exchange with a coworker there. I apologized to him if I ever came off arrogant, if it seemed that my ego was getting the best of me. His answer brought me to tears—he said he appreciated the guidance. Man, this has all happened so fast."

In Collaboration with Field + Supply

Found in Translation: Helen Prior Reimagines Ceramics and Textile Design

Chronogram in partnership with Field + Supply