Frajmund, a Brazilian with French parents, had a vision for the shrimpery 35 years ago. At 16, before college, he took a three-month hitchhiking trip around Brazil. In the early mornings, he would join the fisherman who walked along the shoreline with their nets and caught 30 to 40 pounds of fish before breakfast.

By 1980, when shrimp farming began in China, the sea was already showing signs of overfishing and poor aquaculture conditions. Frajmund's idea for ecologically sound indoor farms that echoed the oceanic environment came as a response to such conditions. However, after more than six months of research, Frajmund learned that the technology had not advanced enough and was too expensive. "Two years ago I looked into it again and saw that it was now possible," he says.

Today there are 25 indoor shrimp farms in the US, mostly in rural areas and some run by transitioning hog and cattle farmers. "This is the first one in New York State," Frajmund says, referring to Eco Shrimp Garden. "I particularly wanted to do it in an urban environment so that I could deliver to a market within two hours." The combination of Newburgh's convenient access to the city and prime real estate market (Eco Shrimp Garden is in the former Resnick's Mattress Outlet) made it the right spot.

"Do you know about the mangroves? " Frajmund asks. Mangroves grow along coastal zones, and are torn out and destroyed to create tropical shrimp farm ponds. Their loss is very serious since they are part of a complex and critical global ecosystem that creates a transitional zone between land and ocean. They absorb five times the amount of carbon than any other forest type. As much as 50 percent of mangrove destruction in recent years has been due to clear-cutting for shrimp ponds, according to the Mangrove Action Project. "Remember that tsunami in the Indian Ocean?" Frajmund asks. "A large part of the devastation was caused by the lack of mangroves to catch the waves." These man-made, mangrove-depleting shrimp ponds don't last. The shrimp are fed with antibiotics and hormones, but the shrimp ultimately die from disease and the ponds are abandoned, leaving polluted deserts. Sri Lanka is the first place that came to realize these dangers and now protects all of its mangroves.

"Last year [the US] imported 560,000 metric tons of these types of shrimp," Frajmund says. Shrimp and salmon have the largest share of globally farmed seafood. "Their popularity has surpassed tuna in consumption," he says. "They come frozen from these shrimp farms and they're not fresh. They have been grown with antibiotics, hormones, and pesticides." Americans love shrimp; they consume almost four pounds per year on average. Chain restaurants have promotions for endless shrimp despite a depleting supply and the 8,000-mile trip they make to our dinner plates. Gulf of Mexico shrimpers still frequently catch deformed shrimp and bycatch, especially sea turtles. The FDA examined only 3.7 percent of foreign shrimp shipments in 2014, according to Consumer Reports. Often only the shipping label is read and nothing is actually tested. According to a 2014 report in the New York Times, most of the shrimp the US imports come from farms in Latin America and Southeast Asia, where environmental and human rights experts have long identified forced labor, hazardous working conditions, damage to ecosystems, and the use of hormones and antibiotics.

Frajmund compares current shrimp-farming practices with factory-farmed chickens that live in tight cages and are fed hormones and antibiotics. "I'm part of the movement for healthy foods," he says. Increased awareness about factory-farmed chicken has resulted in consumer demand for free-range, organic, hormone- and antibiotic-free chicken, even though it is not as cheap. Frajmund hopes that this growing awareness will also extend to aquaculture and to shrimp specifically. He sees what he is doing as part of the farm-to-table, low-carbon footprint movement. There are no US standards for the organic label when it comes to seafood, but consumers can educate themselves through printable guides from Seafoodwatch.org, with categories like "best choice," "good alternative," and, simply, "avoid." 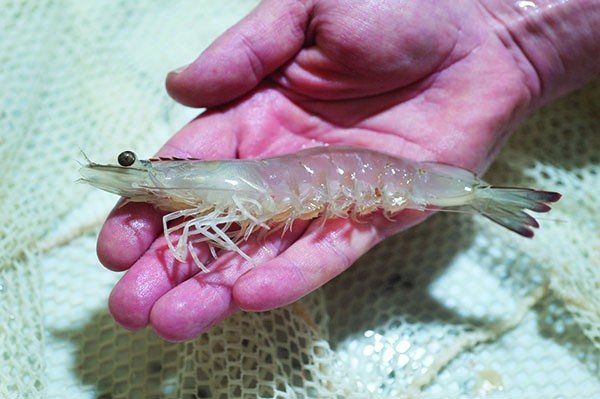 There are now eight 14' x 4' tanks in operation at Eco Shrimp Garden, incubating 150 pounds of shrimp each. Frajmund's goal is to eventually have 24 tanks. "I started seeding the tanks in April this year and after five months, I was ready to start selling," he says. Currently, Frajmund purchases post-larval seeds, or very young shrimp, of the Pacific white leg variety—the most extensively farmed species—from pathogen-free breeding companies in Florida and Hawaii. Eco Shrimp Garden is waiting to receive its nursery permit from the Department of Environmental Conservation, at which point Frajmund will be able to breed the seeds himself in Newburgh, thus reducing the company's carbon footprint even further. "For their feed, I purchase a fish protein that has no antibiotics and no hormones," says Frajmund, and he is also researching alternatives to fishmeal feed, like seaweed. The ponds are in an enclosed area and very few people go in. A biosystem security protocol is in place, and no chemicals are used.

"My shrimp are happy!" says Frajmund, noting that you know when shrimp are happy, "When they jump! When they are energetic! It's a shrimp spa." They have no predators, and each shrimp is allotted a gallon of water. "They're not crowded, so they're happy," says Frajmund, smiling. "If you want to know more about how the shrimp reproduce, watch Isabel Rossellini." He's referring to Rossellini's video series Green Porno. In the one about shrimp, she goes from making shrimp risotto to demonstrating how shrimp reproduce while wearing a shrimp costume. Ultimately, the video comments on the ethics of the shrimp farming industry, which often results in unnecessary bycatch and compromised quality. "How do you know when a shrimp is fresh?" Frajmund asks. "They have no smell other than the salty smell of the ocean. The heads stick on the body. They have two long antennas that you can see, and the shell is not loose and sticks to the flesh."

Eco Shrimp Garden, located at 99 South William Street in Newburgh, sells fresh shrimp every day from 10am to 5pm for $25 per pound. And that's good news for shrimp lovers. Because as Forrest Gump's Benjamin Buford "Bubba" Blue reminds us, whether you barbecue it, boil it, bake it, or sauté it, there's no shortage of options for enjoying "the fruit of the sea."

Soak the raw shrimp to cover in the citrus juice from half an hour to overnight. Use one or a combination of citrus juices. Keep refrigerated.

Place a drizzle of olive oil on a cold plate. Peel the tail, leaving the head and tail tip. Place 3-4 shrimp on a plate, per serving.

Garnish each plate with the chopped red onion, parsley or cilantro, red chili flakes, capers, popcorn and lemon slices. Drizzle with some more extra virgin olive oil. Run a line of sesame chili oil along the side of the plate. Sprinkle with sea salt.