A Hemlock Home on the Hill

When Bryan Perrin lived in Jersey City, he would often find spiky Devil’s Heads washed up along the Hudson. This was in the `80s, when working artists like Perrin and Susan Shaftan had already been priced out of SoHo and other parts of Manhattan. They found themselves (and each other) on the western bank of the river, where Hoboken and Jersey City provided ample, affordable industrial space to live, create, and show art. A Toledo native, Perrin had a day job creating sets and backdrops for photoshoots and television. His free time was spent scavenging the world around him, looking for inspiration and ingredients for his own art. “I was always the guy on the subway carrying home some strange thing I’d found on the street,” he remembers. Even then, Perrin was drawn toward nature and would find his way to the riverbank, where the water became briny from river’s estuarial give and take with the Atlantic. Devil’s Heads, the horned seed pods of the water chestnut plant, were often strewn along the shore, yet Perrin could never locate the plants they came from.


A native New Yorker, ceramicist Susan Shaftan Perrin was also finding inspiration in the world around her, although it was the interconnectedness between humans that interested her. Living and working out of a storefront studio space in Hoboken, Shaftan Perrin began noticing the children on her block and their innate creativity. “The kids outside on the street would have two crayons to draw with, and I had a whole box,” she explains. “I just opened my door to share crayons. It seemed natural, from there, that we would get together and make art.” Her second career as an arts educator was born and Shaftan Perrin began teaching art classes in Newark and Jersey City. Even though she was a city kid, Shaftan Perrin had the same reverence and curiosity for the natural world as her future husband, and did her share of collecting, using materials she gathered as inspiration for her painting and ceramics. “When Bryan and I found each other, we had the same sticks and rocks and bones,” she remembers. “We just knew we were right for each other.”

In 1998, the young couple decided to take a vacation. After a bit of research, they realized they could stretch their time away into an entire month if they rented a house in the Catskills. Landing in Lake Hill, near Woodstock, they both loved the area right away. They were inspired by the natural setting and the fecundity of the woods around them. They were particularly fascinated by the tiny microcosm of the stream bordering their property and how it reflected and connected to the Hudson River’s far-reaching watershed habitat.  “I was in hog heaven,” explains Perrin.  “I loved the newts and the salamanders—I would be flipping over rocks all day long, looking at the weird stuff flopping around between them.” Shaftan Perrin loved the cyclical nature of the seasons, and found an affinity between the process of making art and the process of the growing trees and gardens around her. 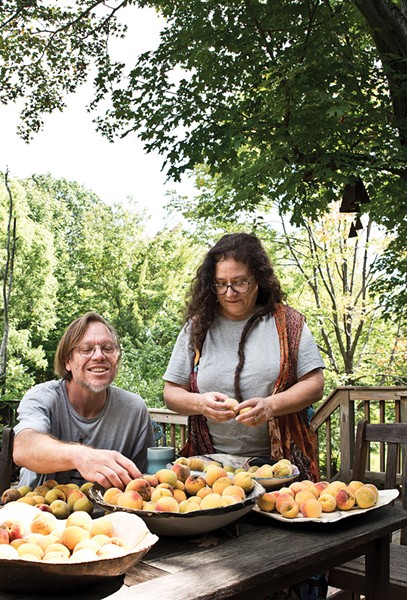 It was on an excursion to the Esopus Meadows Lighthouse in Port Ewen that Perrin found the answer to his earlier question: The surrounding mud flats were thick with water chestnut plants. Rooted in the shallow fresh water, the plants cast their seeds wide to travel with the tides far down the river. That revelation of interconnectedness was an inspiration. “It was an eye opener for me—how one space is connected to another, even when something might not seem close,” Perrin says.

That original month stretched through the summer and then the autumn when the couple began splitting their time between Jersey City and upstate. They realized they’d found both the right companionship and the right home. By that December, they’d decided to get married and move to the Catskills full-time. It took them a year and a half of searching, but when they discovered a ramshackle farmhouse nestled in the rolling hills south of the Ashokan Reservoir, they felt it calling to them. “It was just magical,” Shaftan Perrin recalls. Once the center of a large farm that encompassed the entire hillside, the circa-1890 cabin was built by the Haver family from hemlocks harvested from the surrounding woods and passed down to their descendants. The original one-room cabin had plank-on-plank walls and wide plank floors, with a cistern and root cellar below ground and a sleeping loft above. (Across the now-paved road, the home’s original barn is still standing, although owned by a neighbor.) Later generations had added a kitchen wing to the first floor with a bedroom and hallway above, and eventually added a bathroom. They also built a garage equipped with a studio space. The house and the surrounding landscape felt like home. The couple bought the property and moved in when Shaftan Perrin was six months pregnant.

The couple didn’t let the impending new life deter them from starting renovations. They wanted to add additional living space to the home, both upstairs and down, and alter the aesthetic of the property. However, the remodel quickly became a much more involved project than they’d realized. “We assumed the cabin was post-and-beam architecture,” recalls Shaftan Perrin, “until we began renovating and realized there were actually no posts—it was just beams.” 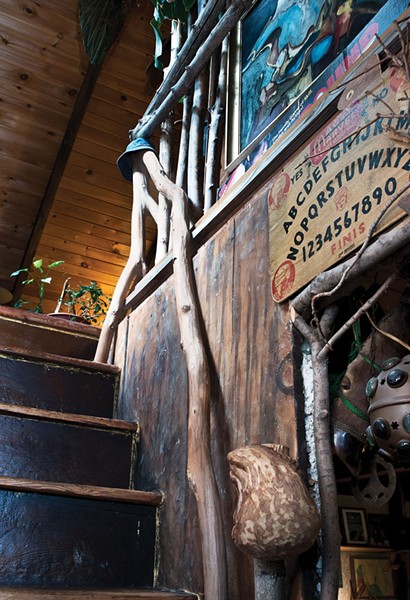 The week their son was born, they removed the home’s roof. (They temporarily moved into the garage with their newborn.) By lifting and expanding the original sleeping loft and building outward, they extended the upstairs to include a new master bedroom and living area at the top of the staircase. The space below the master bedroom was transformed into a combination den, library, and guest bedroom. Downstairs, the original one-room cabin—still the heart of the home—was updated with a new wood stove. It’s now the family dining room.

The couple set to work using the home as a canvas for their creativity. Inspired by the surrounding landscape, Perrin drew on his skills as a set designer to create various textured surfaces for the walls. Downstairs, faux birch bark lines one wall; turning a corner, faux lichen covers another. In the upstairs master bedroom, the walls were painted to mimic the blue-gray sky after rain. Shaftan Perrin’s eclectic, colorful ceramic tiles cover the floors and walls of the home’s renovated downstairs bathroom and hearth; the intermixed shapes and textures evoke flowing waterways and the surrounding woods.

The couple replaced blue vinyl siding along the home’s exterior with cedar shake. Shaftan Perrin painted an outline of wide, horizontal curves along the sides of the house, which her husband used as a guide laying various sized shingles to create lines that seem to undulate in waves around the house. He also built a deck and wooden walkway from house to the garage and studio.

Over the ensuing years, the couple turned their attention to the property’s surrounding five acres, building gardens and planting trees. They removed a circular driveway and replanted the area with a flower garden and shrubbery. In the 18 years since they bought the house, the couple have reforested the land with over 30 trees—including peach, cedar, deciduous sequoia, and a magnolia tree that blooms all year.

That same patience and tendency to nurture new life has yielded fruit in another of their creative endeavors. “Urth Arts” the couple’s intergenerational arts education program is based out of their home studio. During weekend workshops such as “Watercolor and Watershed” participants make art inspired by nature, often using the elements of nature as means of expression. The stripped-down art program functions in almost the same way the one-room school houses of yesteryear did, with students of varying abilities, levels, and ages working side by side.  The husband-and-wife teaching team provide abundant supplies and inspiration, share technique, and give students the occasional redirection or new idea—but then let nature do the rest. Copying—or riffing off one another—is encouraged and classes make full use of the abundant natural surroundings and always include drawing. 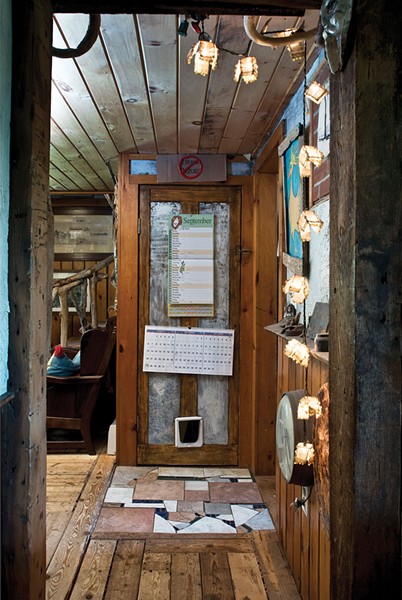 To Perrin, it harkens back to a simpler way of teaching, and experiencing, art. “How did people used to learn? By sitting and working together—old people, young people, people who weren’t dancing to the same kind of music—different kinds of people would get together and that created genuine art movements.”  Since the program’s inception it has expanded to include classes and workshops held in local schools and the Clearwater Revival and Rosedale Street festivals.

Perrin’s experiences teaching art, and especially working with children, have heartened and further inspired him to mentor a younger generation. For Shaftan Perrin, it’s precipitated a shift toward her own creative work. She’s now selling her ceramics on Etsy. The balance she’s been able to achieve—between her own artistry and mentoring the work of others—has also instilled a profound sense of gratitude. “Our home is still a work in progress,” she explains. “But we are really grateful for where we are, what we’ve built and what we continue to create.” 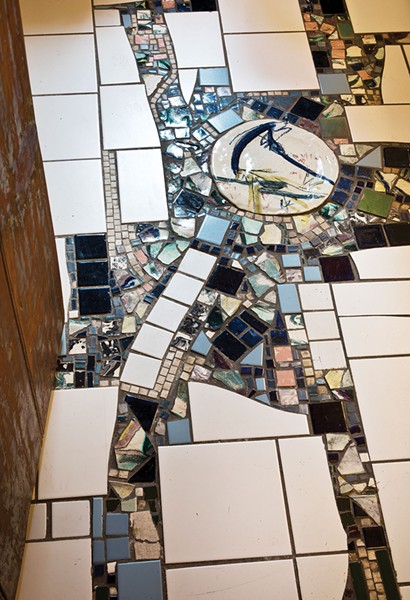 The original print version of this article was titled:
"Up Stream: Two environmental artists find a natural habitat in Samsonville"