A Guide to Orange County Towns: Newburgh and Cornwall 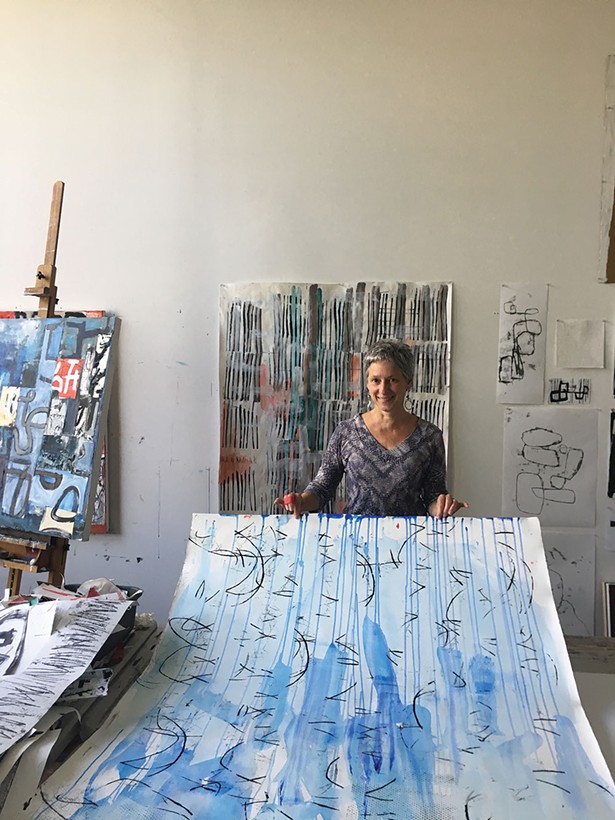 Whether you'd rather take a trip to Storm King Art Center in Cornwall this spring or kick back at Blacc Vanilla Cafe and Lounge in Newburgh, here's the scoop on attractions in these two Orange County towns.

Historians are divided on whether Henry Hudson's navigator was referring to Newburgh or Cornwall when he noted in his log that this would be "a pleasant place to build a town." What we do know is that the Half Moon was anchored in Newburgh Bay, and that people have been falling in love with the place ever since.

Cornwall, at the south end of the bay, is a peaceably lively place nestled in the shadow of Storm King Mountain. To appreciate His Majesty properly, sign up for a paddle with Storm King Adventure Tours; they'll teach you kayaking and guide you to wonders: Bannerman's Castle, the Moodna Marsh, Plum Point. For a loftier perspective, you can hike Storm King State Park; wear decent footwear and discover historic ruins on your way to magnificent views. 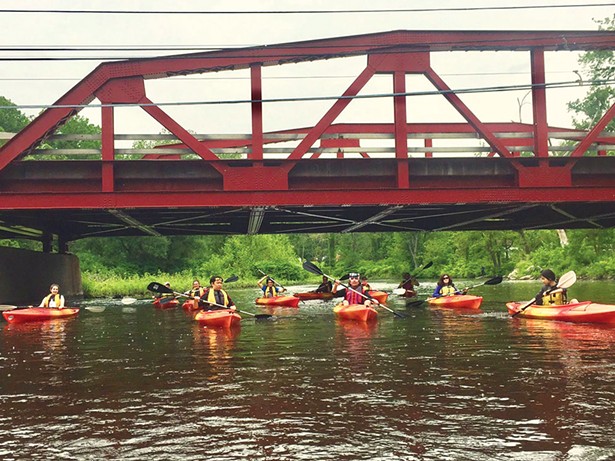 The perfect follow-up to either is a wander through the warm-hearted, upscale, and charming village of Cornwall-on-Hudson. You can sate your hunger at Jones Farm, begun as a dairy operation in 1914 and still offering fresh produce alongside a country store, scratch bakery, cafe, gift shop, and gallery.

Jones Farm is Sheree Morrison's favorite local outing. "It's just so cute, and the food and baked goods are wonderful," says Morrison, who opened her fashion-forward thrift boutique, MOD, on Main Street in February 2015. "Of course, Painter's Inn is great if you're in an old-school mood." Morrison, originally from East Fishkill, is loving the entrepreneurial life in the little village on the West Shore. "I have a close group of people who came here because they were sick of mall shopping; they've become friends of mine and of each other. I love helping people hone a personal style and hand-picking high-end designer stuff in city thrift shops." Cornwall-on-Hudson highlights include a five-star Wiccan shop, Brid's Closet, and the delightful 2 Alices Coffee Lounge, which offers beer, wine, art, music, and an outdoor patio. 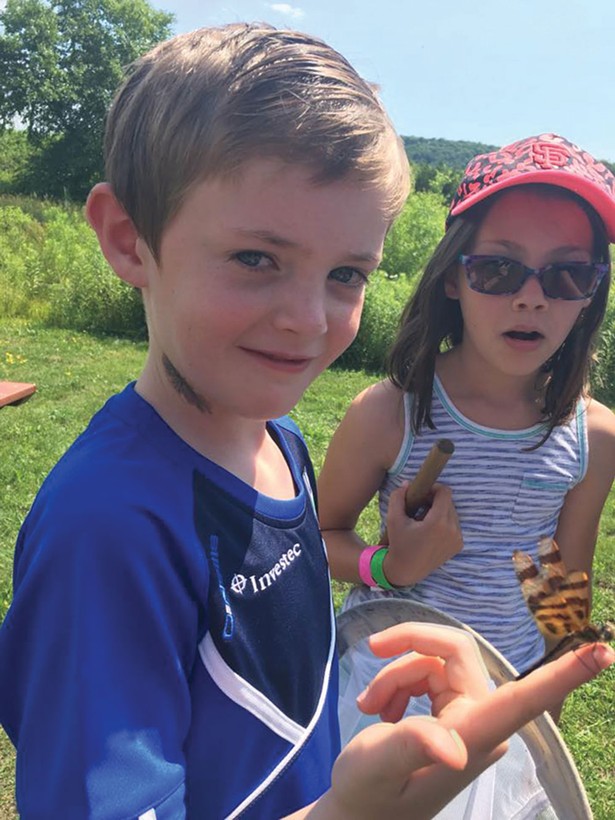 Just north of Cornwall, in New Windsor, take a surreal journey through rolling hills dotted with sculpture at the Storm King Art Center and/or immerse yourself in poignant military history at the National Purple Heart Hall of Honor. And just north of New Windsor, of course, you will find yourself in a true Hudson Valley legend: the City of Newburgh.

Newburgh's struggles in the late 20th century were epic. Named the All American City by LOOK magazine in 1952, Newburgh was a place where gleaming luxury sedans lined the widest Broadway in the state, where elegantly clad citizens imbibed theater and opera and shopped the bustling thoroughfare of Water Street. Before that, the city was a civic-minded and industrious powerhouse of the Gilded Age economy; and even before that, it was General George Washington's chosen home base for planning and run ning the Revolution.

As if the city were a mythological character struck by an ironic curse, it suffered a series of blows in rapid succession: the vanishing of the industrial base, the brief reign in the early 1960s of an administrator so racist he had to be brought to heel by the Feds, and a disastrous attempt at urban renewal are but three of the better-known.

Even at its worst, the city inspired ferocious passion with its spectacular river views and architectural majesty. Through twists and turns that could fill a series of novels, ardent forces for revitalization tried tactic after tactic and never gave up, and the Newburgh of today is rising fast.

"There's nothing in the Hudson Valley that beats the Liberty Street Bistro for a great dinner—and that's coming from a gourmand who spent six years exploring the great restaurants of Philadelphia," says Austin DuBois, an attorney who returned to the Hudson Valley and chose Newburgh as home. "I also like Ms. Fairfax and The Wherehouse. Of course, the Newburgh Brewing Company for great craft beer. And it's lesser known for now, but the guy running Graft Cidery has serious chops. He's hitting all the right notes, from the product to the art on the label."

The Liberty Street area, perfectly situated to include a visit to Washington's Headquarters State Historic Site, offers a lot of solidly established excellence (check out the kimchi dumplings at Seoul Kitchen and the signature salted chocolate chip cookies at Caffe Macchiato) and is now just part of a bigger picture of vitality springing up in many locations at once. Blacc Vanilla Cafe on South Street is another favorite with DuBois. "A local came back home and opened it, and I go there a few mornings a week for coffee, and the scene is organic as it gets," he says. "Everybody, all the walks of life, getting to know each other and having fun." Blacc Vanilla's grand opening in late 2017 featured an appearance by Decora, a hip-hop artist, performance poet, and event curator with strong Newburgh ties. Blacc Vanilla's Blacc Tie Gala, happening Saturday, April 21, will be held in the Regal Bag Studios, a magnificently refurbished industrial building on the river, and catered by the Liberty Street Bistro team. That event will benefit Newburgh Illuminated, an annual explosion of music, art, dance, and food that's scheduled for June 2 this year. (Decora will perform.)

All this resurgent culture (and we haven't even mentioned the Newburgh Symphony Orchestra, the Queen of the Hudson chamber music series hosted at Atlas Studios, or the public art splendors of the Lightbulb Project) is backed up by solid community development. Under the deft leadership of Mayor Judy Kennedy, the city has benefitted from alliances among groups like Habitat for Humanity, Safe Harbors, and Ulster County-based RUPCO working alongside the Newburgh Community Land Bank, a redevelopment organization that returned over 50 properties to the tax rolls in 2017. They have a powerful tool in A River of Opportunities. The nonprofit is building a successful track record helping to boost the visibility of available commercial properties through a strong social media presence and in-person workshops. "There's increased activity coming from not just downstate but northern New York as well," says Brian Coleman of Pyramid Brokerage. "That website definitely helps. People are buying not just residences, but spaces for their businesses as well."

"If I was wealthy, I think I'd buy up every bit of real estate bordering Downing Park and hold it for 10 years," says Dubois, referencing the 35-acre green space at the city's core that was the last project of the same team that created Central Park. "It's such a jewel." The park, all gently rolling hills and fanciful historic structures, is once again vibrant; the city is planning to host exhibits at the Shelter House, a soon coming coffee cafe in the park. And besides the replanted ornamental gardens, there's the Downing Park Urban Farm. (Newburgh's 3rd annual Urban Farming Fair is happening right on Broadway on April 28.) The Newburgh Preservation Association, formed in 1978, is happily hosting history tours, lectures, and croquet matches, whilst working up a list of contractors to provide to "our new neighbors in the historic district."

Visit the Newburgh Bay region this spring, when the arts and flowers alike will be blooming from pastoral Cornwall to "New York's Other City" and beyond. "I came back from traveling to many places and said, 'this is home,' and I'm one of many," says Dubois. "I can see the river from my second floor; I'm surrounded by cool little shops and bars and restaurants and history. The revitalization that's happening now is strong and organic and thoughtful, and it just keeps gathering momentum."