My home office, where I'm writing this outdoors column from, has a view of the Rosendale Trestle—the nearly 1,000-foot-long steel truss bridge that is a town symbol. The trestle was constructed in the 19th century as part of the Wallkill Valley rail line. When it opened, in 1872, it was the highest span bridge in the US, towering some 150 feet above Rondout Creek.

Trains haven't crossed the trestle in decades, however; it now serves as a visual reminder of intersecting bygone legacies, among them Rosendale's cement mining history and American investment in long-lasting infrastructure projects. The trestle was mostly closed to the public from 1977 until 2013, when it reopened as a pedestrian walkway for the Wallkill Valley Rail Trail, which repurposes about 22 miles of the former rail line as a linear park running from Kingston to Gardiner.

Now the trestle serves as an invitation to explore. Rail trails are opening all across the Hudson Valley, on former lines that once thrummed with freight and passenger activity, and now again are active; by the end of next year, the Empire State Rail Trail, which will link 750 miles of regional multiuse trails from Manhattan to Lake Champlain and Buffalo to Albany, is scheduled to be completed. Each trail offers new ways of exploring familiar landscapes and a richer transit from point A to point B. And while the scenery is great, if you want something more, here are four itineraries with suggestions for food, shopping, and recreational activities along the way.

1. Rosendale to Gardiner on the Wallkill Valley Rail Trail, 13 miles

Enter on the west side of Joppenbergh Mountain at the cutout near the Binnewater Kiln parking lot. After one-third of a mile, you'll reach the trestle. Continue on the unpaved path to the Rail Trail Cafe (open summer weekends until dusk), which serves farm-to-table pizza in the woods.

Additional options pop up about three miles further, on Springtown Road: Bradley Farm, which hosts tastings and sometimes has beer and live music, and Coppersea Distilling, which has tours and tastings on the weekends. For an educational break—or just a resplendent detour—scoot through Historic Huguenot Street, a National Historic Landmark that tells the stories of New Paltz's early Dutch settlements (and also has public restrooms). Or head to Water Street market for shops and antiquing.

South of New Paltz, the rail trail parallels Route 208. After three miles you can stop again at Dressel Farms, which has cider, doughnuts, and U-pick apples in the fall, or continue on to Yard Owl Brewery (Friday-Sunday, 3-7pm) or Cafe Mio (open until 4:30pm) for a late lunch in Gardiner.

2. Lloyd to Poughkeepsie on the Hudson Valley Rail Trail, 7 miles

For a scenic, family-friendly ride with fewer stops, try this route. Park in the dedicated lot at the 299 and South Street intersection and set forth on the Hudson Valley Rail Trail, which is asphalt paved. Nearby Tony Williams Park and the Black Creek Wetlands offer sporting and fishing opportunities. Follow the trail through wooded canopy as it turns south at an abandoned Southern Pacific boxcar and down into Highland, where you can stop at Underground Coffee & Ales for a brew and some pub food, Hudson Ale Works, or Frozen Caboose Ice Cream to refuel.

Next, cross the epic Walkway Over the Hudson for the most picturesque views of the river. On the other side in Poughkeepsie, peel over to the Pulaski Park pool for an end-of-ride dip. Adventurous riders can continue all the way to Hopewell Junction via the Dutchess Rail Trail. 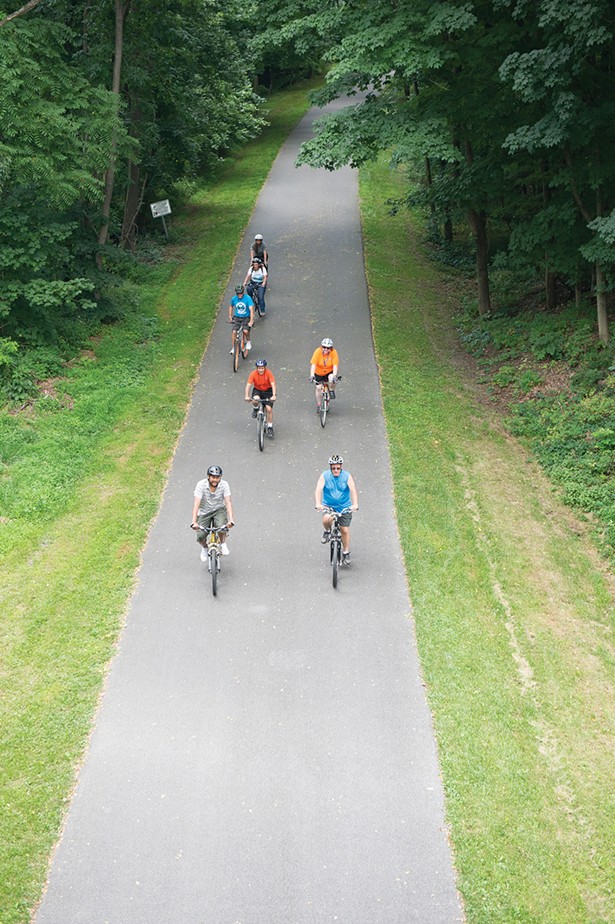 3. Kingston to High Falls on the O&W Rail Trail, 11 miles

This route is a favorite of Bryan Washington, owner of Utility Bicycle Works in Kingston. It provides a scenic wooded ride, but you'll need a mountain or hybrid bike. Fuel up with a beer or coffee at Rough Draft, then pick up the trailhead just west of the intersection of Washington Avenue and Taylor Street.

For about two miles, the trail is muddy and rough, but just south of Esopus Creek, it turns to asphalt while it parallels Route 209 for two miles. (There's also a well-marked trailhead and parking lot where this section begins, in Hurley, if you'd rather start there.) Follow it south past scenic fields and a railroad tunnel toward Cottekill. About halfway there, the route becomes wooded and grassy again. It's also wide enough to ride two or three abreast, for a leisurely social ride.

Keep going until you reach High Falls, where you can visit the D&H Canal Museum, grab lunch at the Last Bite, the Egg's Nest, or High Falls Kitchenette, and check out the hamlet's eponymous falls. Note: Because the site is just downstream of the Central Hudson hydroelectric dam near the old D&H canal, the water quality is generally higher than other parts of Rondout Creek—but check online before you go swimming. If you go on a Sunday, thrift for vintage and second-hand scores at the High Falls Flea Market, which takes over Grady Park from April through October with dozens of vendors.

Here's a bucolic, easygoing route on a paved trail that ends at one of the region's most beautiful state parks. Park at the lot on Under Mountain Road just east of Route 22. There's a short unpaved section, but otherwise this is a smooth ride. As you approach Taconic State Park to the north, you'll pass over Bish Bash Brook (Bish Bash Falls are a mile east, across the Massachusetts border). Soon you'll arrive at the park entrance, which has its own extensive trail system, swimming, and other aquatic activities at Rudd Pond and Ore Pit Pond, and the newly created Copake Iron Works Museum.