A Feast for the Ages: CIA to Serve Hudson Valley History on Your Plate at American Bounty

by Anne Pyburn Craig and Culinary Institute of America

June 28, 2019
Last Updated: 06/28/2019 10:35 am
comment
What do you love most about Hudson Valley culture? The deep and lively tale of its history? The superb food? How about the cool colleges? Wrap it all in a package and get your tickets right away for the Progressive Hudson Valley History Dinner. You’ll be eating like the ancestors — well, like a lucky version of your ancestors with access to culinary expertise.

The meal has been in the works for months, an interdisciplinary project brought to us from the Applied Food Sciences department, the library archivist, pastry department, and the culinary department at the Culinary Institute of America (CIA) in Hyde Park.

“We wanted to do a deep dive,” says Chef Brian Kaywork, a 2002 graduate who’s now the lecturing instructor of American Bounty Restaurant. “The students have been researching and testing old recipes, and each course will be based on the authentic foodways of its time.” 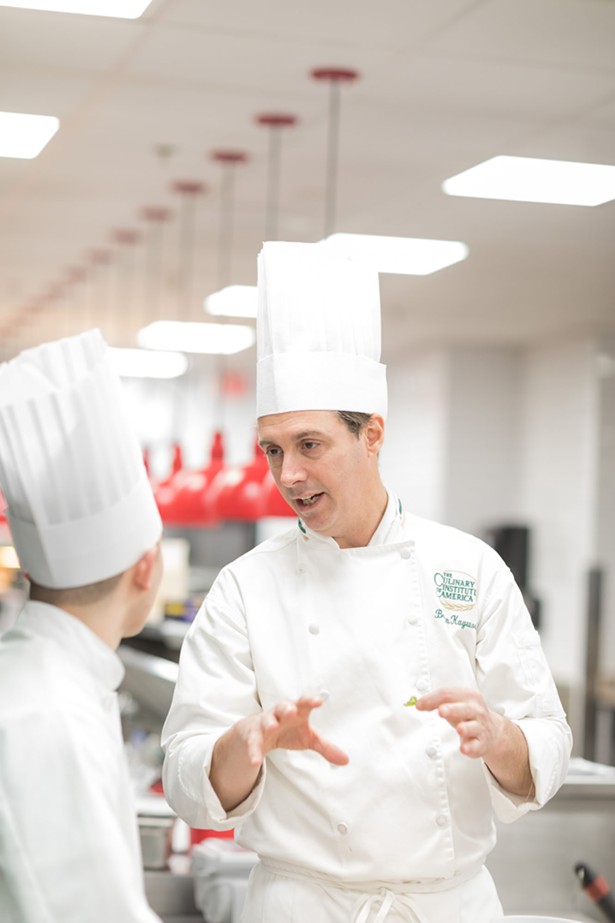 The meal will start with pre-European appetizers: berries, sunflower seeds, black walnut, shad, venison, acorns, flower blossoms, maize, squash, beans. “It’s fun stuff to nosh on,” says Kaywork. “It all ties in with a museum exhibit that the food history class put together.”

The Colonial era will be represented by pea soup, veal meatballs and roasted oysters. Research at Washington’s Headquarters and at Historic Huguenot Street will lend a rare flavor of authenticity.

“When you find a recipe from that age, it’s a paragraph in a shorthand narrative style of the time with an implied ‘of course you know how to do this,’ not an exact recipe,” says Kaywork. “A certain amount of the process is instinct. But we knew a couple of things we wanted to emphasize: one was that you can’t talk about Dutch Colonial food without acknowledging the African Americans who cooked so much of it, and another, that at the time the Hudson River was an incredibly robust source of seafood. Oysters were a humble meal, easy pickings; everyone survived on them.”

Repping the Gilded Age will be a Pike a la Royale prepared as it was at the famed “Delmonico’s restaurant. “Delmonico’s was the gold standard of its age,” says Kaywork, “and they left us this profoundly huge 1300 page cookbook. So you’ll go from this simple, humble Dutch Colonial dish to something from an era redolent of optimism and new money. Eating as the French did was the ultimate aspirational standard at the time.”

During each course, students will be sharing information about the dish and the era. “Academically, it’s been a really interesting space to occupy,” says Kaywork. “But we’re still the American Bounty restaurant at the CIA, so it will all be a lot of fun and the hospitality will be exceptional.”

The next course is as locavore as it gets in the history department: petit hot dogs made of turkey and wild game, inspired by the kind the Roosevelts served to British royalty on the occasion of King George VI’s visit to Hyde Park in 1939, the first time a reigning monarch had ever set foot on United States soil.

Dessert will celebrate the founding of the CIA. “This isn’t meant to be a promo for the school exactly, but we have had an impact,” says Kaywork. The dish will be a summer berry parfait “plated in the most contemporary way.”

The flavorful evening will kick off at 6 pm on July 18 with a reception and talk in the Conrad Hilton Library Rotunda of the Danny Kaye Theatre, where you can enjoy the exhibit; you’ll then move on to the American Bounty for the rest of the feast.

“As the evening goes on, the food and the narrative will come together in a great arc of who resided here,” says Kaywork. “There’s nothing political about it, but there is a sense of the intensity felt in every era by the people living through it.”

Tickets are $95 all-inclusive (you’ll be served historically-appropriate beverages as well.) Call (845)451-1014 or americanbounty.com/events to reserve yours.
This content is made possible by our sponsor. It does not necessarily reflect the attitude, views, or opinions of the Chronogram editorial staff.