A Family Affair: The Nutcracker

While our religious, cultural, and national backgrounds inform how we celebrate, there seems to be one holiday tradition that countless families share: the annual visit to the Stahlbaums'. Once arrived, we settle into the grand parlor to admire the perfectly bedecked tree and watch as the gloriously turned-out ladies and gents greet one another. The children, dressed in their holiday best, play and dance, working hard to keep their best manners on display. The music, games, and company are all delicious, and when Godfather Drosselmeier arrives, the evening is electrified by magic. By his hand, life-size dolls dance, enchanting us with their beauty. But it is only after midnight, once all the guests have left, that the true wonder begins to unfold, and we, along with Marie, are swept away by Tchaikovsky's timeless score to the Land of Sweets.

"The Nutcracker," with its fanciful story, timeless musical themes, and tantalizing confections, makes for the perfect family outing. Grandparents, aunts, uncles, cousins, and siblings gather to attend the ballet, sharing the wonder and beauty with even the very youngest. And while few of us will return to homes nearly as grand as the Stahlbaums' or share Christmas dinner with an uncle as magical as Drosselmeier, "The Nutcracker" is an integral part of our own celebrations.

This year, The New Paltz Ballet Theatre's production, their 16th at the Bardavon in Poughkeepsie, is a family affair of a different sort. In addition to welcoming guest artists from the New York City Ballet dancing the roles of Sugar Plum Fairy and her Consort (Teresa Reichlen and Ask la Cour for the Thursday and Friday performances, Erica Pereira and Daniel Ulbricht over the weekend), this year's production features multiple members from no less than seven area families.

For Lisa Chalmers-Naumann and Peter Naumann, both New York City Ballet alumni and the co-directors of The New Paltz School of Ballet, "The Nutcracker" has always been a family endeavor. Peter has been performing as Drosselmeier since their very first production, while their son Trevor, who has since become a member of Ballet West in Salt Lake City, literally grew up on the Bardavon stage. He began by playing Fritz and then the Prince before graduating to principal roles as the Arabian and Spanish leads. The Naumanns' daughter, Remy LaRay, made her "Nutcracker" debut at the age of four, appearing as the Tree Angel, the very smallest of the Angels. Ten years later, she is quite grown up and is dancing the roles of the Snow Queen and lead Mirliton, as well as one of the Demi-Flowers. Even their son Carl, who is not a dancer, played the Prince for three years before heading backstage to design sound for the ballet. He has, however, been known to return for the occasional encore as a Party Guest.

The White family of New Paltz has four of their seven children performing in this year's production (last year they had five). Thirteen-year-old Mary White, who has been studying at New Paltz Ballet since she was three years old, has been cast in the principal role of Marie (sharing the role with Alexandria Diemoz in alternating performances), while 10-year-old brother Gabe plays the dual roles of Drosselmeier's nephew and the Prince. Sixteen-year-old Rebekah White will be playing both a maid and dancing as a member of the Spanish and Demi-Flower corps while the youngest member of the family, seven-year-old Anna White, joins the cast for the second year as an Angel.

Seventeen-year-old Sarah Kassel, alternately dancing the principal roles of Dew Drop Fairy and lead Mirliton, will be graduating this year, culminating many years performing in NPBT's "Nutcracker." But, for the Kassels, the "Nutcracker" tradition lives on with younger sister Mary, who this year dances as a member of the Chinese corps and appears as a Maid in the party scene. 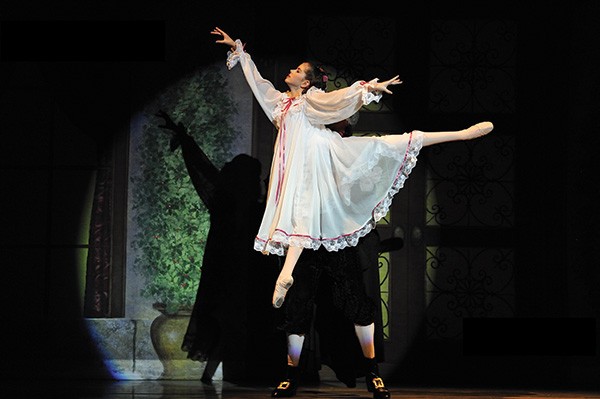 Thirteen-year-old Gianna deMassio, who danced the role of Marie in 2012, is also a long-time student at the studio. As a third-year pointe student, she will be performing Soldier Doll and Ballerina Clown and is also a member of both the Snow and the Mirliton corps. Her younger sister, nine-year-old Ava, also does triple duty as a Party Girl, a Soldier, and a Clown.

And while the studio is always sad to see students (and their parents) graduate out, it's exciting to see the younger families come in, ready to create traditions of their own. At 12, Bryanna Winkler is nearly a "Nutcracker" veteran, having performed in various roles since she was a little Angel at the age of seven, and now her younger sister, six-year-old Bella, follows in her sister's footsteps. The Zaborowskis of New Paltz have Tomasz playing Fritz and his older sister, Lily, playing a Party Girl and a Baker. Finally, at the youngest end of the age spectrum there is five-year-old Aidan Baker joining the cast for the first year as a Party Boy, while older sister Gabrielle dons a halo as one of the Angels.

Such is the reach of the experience of this production that even nondancing members of many of the families get involved. Look for the dapper gentlemen in the party scene and see if you can figure out whose real-life fathers they may be.

Memories are made in the land of "The Nutcracker," in the audience and the rehearsal studio. Whether you have a long-standing tradition of attending the ballet or this will be your first year, gather your family up and head to the Bardavon to revel in the magical tale.