A Culinary Poem for Our Time 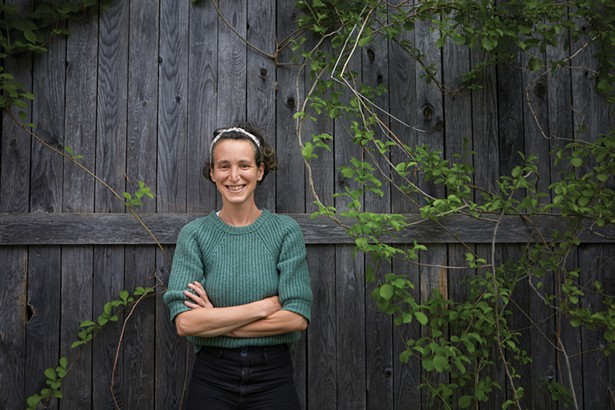 Don’t throw that wilted parsley sprig out. Tamar Adler will transform it into something delicious for you, and in the process, give you a new way of looking at food, waste, and what sustains all of us.

She is the type of bizarrely well-rounded person—a “personality” in the best way—who makes a lasting impression.

Dan Barber, chef and co-owner of Blue Hill at Stone Barns—a man who has received multiple James Beard awards, has been named one of the world’s most influential people by Time magazine, served on President Barack Obama’s Council of Physical Fitness, Sports and Nutrition, and serves on the board of Harvard Medical School’s Center for Health and the Global Environmen—someone, in other words, who has reason to not remember the hundreds of phenomenally talented chefs who pass through his ranks, lauds Adler.

“Tamar worked with me 12 years ago, but I remember her attention to detail, her clever appreciation of a good story, and her beautiful writing,” Barber recalls via email. “She went on to show all these things in her career, and it’s been amazing to see.”

She does seemingly strange things with food, like cooking eggs in spoons over coal, or making salads from canned bamboo shoots and artichoke dubbed “Salad for a Natural Disaster.” In her hands, these hodgepodge meals and idiosyncratic recipes seem like a culinary poem to our time. A recipe for not just surviving, but thriving, during a global pandemic, with climate change at our doorstep and everyone at home all the time, hungry and bored.

Adler’s first book, 2011’s An Everlasting Meal, has achieved cult classic status, and recently went into its 29th printing, the last two of which occurred this year. (In the foreword, influential food critic Mimi Sheraton describes Adler as “a spiritual, free-willed cook and writer with an Impressionist’s eye and palate.”)

During the pandemic, her prescient approach to pantry cooking—of never wasting a scrap (she freezes carrot peels and onion skins for stock; saves bacon fat for delicious stir fries), of finding the delicious in the sad and dreary—seemed like the only Rx to lockdown fatigue that America could agree on. 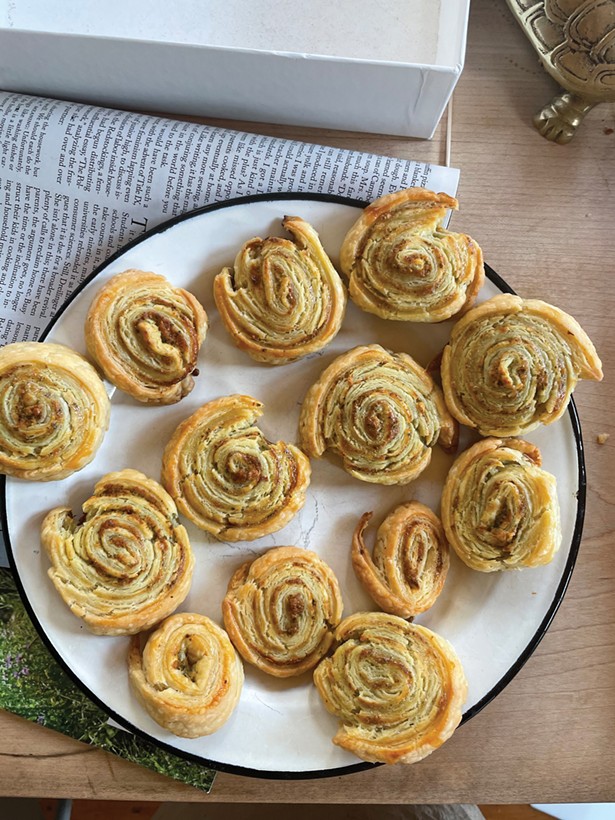 “I wrote [An Everlasting Meal] after the 2008 recession,” Adler recalls, from her home in Hudson. “People were tightening their belts, homes were being foreclosed on, it seemed like an incredible time of economic stress. The book is an homage to M. F. K. Fischer’s How to Cook a Wolf, which she wrote during World War II. It was my approach to taking a bad moment and turning it into a joy, and offer the potential of living with dignity during a time of pain.”

When we spoke, Adler was enjoying a rare moment of quiet at home, while her four-year-old son is at his Montessori preschool in Catskill, and her husband, Pete, was occupied at work. From home. Because #20202021.

“Hardship is cyclical,” Adler points out. “This has also been an incredibly stressful time for so many people, but it has also been a time to really dig deep and find joy. For me, this is through cooking, and feeding people.”

She is in the midst of writing what she would never deign to refer to as a magnum opus, but it sure sounds like one.

“I have a call scheduled with my editor, and honestly, I’m a little scared,” she admits. “This book is completely insane. If I had to describe it, I’d call it the cookbook correlate to The Everlasting Meal. In my addled brain, the only way to truly write that cookbook is to turn it into an A to Z encyclopedia of leftovers. I turned in A to J last week, and I had 10 entries under Kool-Aid, five kimchi recipes, and multiple recipes for ripe versus underripe fruits. Right now, I’m planning out the next 16 letters. I could spend a year on P, because pasta. I mean, the options are endless.”

Adler’s deep delight and certainty in possibility, her laudable desire to look on the bright side, is what landed her in Hudson in 2016.

“I grew up in Westchester, and I spent several years in other places, but then suddenly, I’d been living in New York City for 10 years,” she recalls. “This was not what Pete and I wanted. The quality of life was low. As a writer, I was always annoyed by the noise. We couldn’t afford to buy an apartment or home, or even move to a better rental. I came here to Hudson impulsively one day, after not being able to get it out of my mind. I’d gone to a friend’s lamb roast further upstate and had stopped through. I had been struck by the beauty, the sense of community, the livability of it.”

A quick return visit did nothing to shatter her illusions. “Our good friends Kate and Mona, who own Talbott & Arding Cheese and Provisions in Hudson, invited us to stay for a weekend, and once again, everything felt like the kind of life we wanted to live. On impulse really, we decided to move.”

Adler admits that she had “no idea how real estate even worked,” but after a few missteps, quickly fell in with a wonderful agent that “we are still in touch with. We bought an 1840s townhouse essentially on the spot, and it was naïve in retrospect, but also the best decision we ever made. It’s almost unbelievable. We love our neighbors, my son’s friends with twins who live across the street. They wake up and wave to each other.”

Adler’s happiness with her life in Hudson is palpable, something typically found among ex-urbanites who were sick of the city they were living in, ground down by the pace, expense, and shocking lack of fun it entailed. Adler’s enthusiasms for Hudson’s charms are multifarious.

“The food scene here is incredible. I am a huge supporter of Rolling Grocer 19, because they source locally and their food is impeccable, but also because they have tiered pricing, depending on your income. If you own your own home for example, you pay full price,” she says. “My son’s diet is 90 percent Sparrowbush Farm Spelt Bread. The whole family is into Samascott Orchards everything.”

But she is also inspired by the restaurants, wine stores—I have a close relationship, maybe too close, with Hudson Wine Merchants,” she jokes—and their desire to give back.

“During the pandemic, several of the chefs in town, including Jamie Parry at Swoon and John Carr at Le Perche, dedicated themselves to Columbia Free Kitchen,” she says. “Then Kitty’s and Lil Deb’s Oasis put community fridges in front of their places. That’s why I love it here. It’s a community, where people are invested in helping each other.”

A certain type of creative ex-urbanite, like Adler, seems to land in a town like Hudson, in part because of the charm they clearly find in the distinctive form of camaraderie here. In a recent post on Instagram, she thanked one of her neighbors after a day of cookbook trials in which “everything I made was disgusting. … It was so unnerving I lost my flow. I’ve been between uninspired and outright defeated ever since. I psyched myself out. Today’s not much better, except that I made some manioc/cassava fries and topped them with cilantro and scallions and zest and they were delicious, because how could that not be. Then when I told my neighbor about my failure she said: ‘Oh good! It happens to you too!’ And that made me feel so much better I’m 50 percent healed and that much more ready to get back in the saddle tomorrow.”

Adler’s latest book is being written in her trademark spirit of communion and collaboration. And because everything Adler does, including writing cooking tomes, is done with a crowd-sourced, punk-rock-tinged democratic approach, she is accepting recipe requests at the ambitiously named email cookmygarbage@gmail.com. She’s tracking to 3,000 recipes, but there’s always room for one more.

To discover something Adler hasn’t already covered though, you’re really going to have to dig deep into the compost bin. (Don’t bother sending your banana peel requests, she already has you covered with an imaginative chutney and dry curry.)

If you want a taste of Adler’s transformative culinary magic, try your hand at Adler’s Banana Skin Thoran.

Wash and dry banana peels, removing ends and any big brown spots, and slice into thin horizontal ribbons. Pound or pulse the garlic, ginger, cumin, coriander, turmeric, and salt into a paste. Heat the fat in a large pan. Add the mustard seeds. When they start to pop, add the onion, garlic-spice paste, and the curry leaves. Sauté until they just begin to soften, about 3 minutes. Add banana peel, chili, coconut, and water. Simmer until peels are tender and delicious, 15-20 minutes. Garnish with cilantro and squeeze with lime, if using, and eat over rice.