"Drawn to Greatness" at the Clark Institute - Feb. 3-April 22 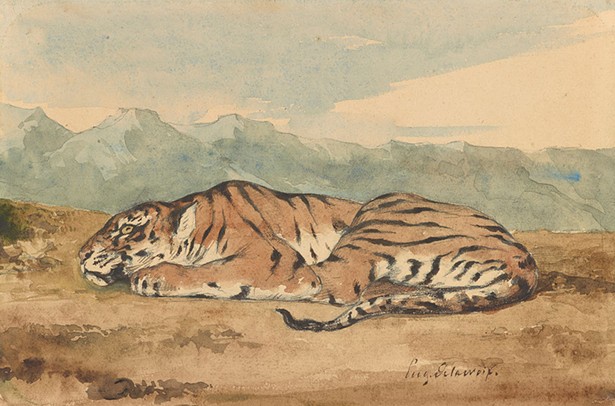 "Drawn to Greatness" is the latest art exhibit to be displayed in Massachusetts's Clark Institute.

"You have 500 years of great drawings—you can't lose! Everybody is going to find something they really like," remarks Jay A. Clarke, drawings curator of the Clark Institute in Williamstown, Massachusetts. She's speaking of "Drawn to Greatness: Master Drawings from the Thaw Collection," which opens February 3 at the Clark: 150 works from the collection of Eugene V. Thaw, art dealer and philanthropist.

What exactly constitutes a "drawing"? All these pieces are on paper, though some involve watercolor, matte paint, chalk, colored pencil, and glued-on scraps. Several of the works—including ones by Dégas and Gauguin—began as prints, with hand-painted additions by the artist. Most collectors focus on a particular time or place, but Thaw did not. Eventually this weakness became a strength; he acquired major European works from five centuries. As an introduction to European art, "Drawn to Greatness" is better than the best college textbook.

"In drawing you see the artist thinking through ideas. It was perceived, historically, as an intellectual practice," observes Clarke. The works are hung essentially chronologically, beginning with Two Lovers By a Fountain in a Landscape (circa 1510) by Albert Altdorfer, a pen-and-ink drawing of two androgynous figures under a large, spiky, Dr. Seussian tree. The most recent piece is White Curve (Radius: 12') (1976), a striking, flag-like collage by Ellsworth Kelly.

For some reason, drawings can be funnier than paintings. Giovanni Domenico Tiepolo (1727-1804) produced 104 humorous caricatures of the Italian clown Punchinello, two of which appear in this exhibition. Drunken Punchinello shows the jester supine on the floor, feet facing the viewer, his big belly rising like a hill. Honoré Daumier's stinging wit is evident in The Schoolmaster and the Drowning Child (1856-57), based on a tale from La Fontaine in which a teacher lectures a floundering child rather than pulling him from a stream.

Drawings have an intimacy lacking in painting or sculpture. Van Gogh drew vivid sketches in his letters, in solemn brown ink. Two of them are included in "Drawn to Greatness." Théodore Géricault's Head of a Black Man (1818-19) has the surging dignity of a 1960s Black Power poster. I'd never seen Cézanne's watercolors; they are among the best-kept secrets of 19th-century art. The radiant, transparent Still Life with Pears and Apples (1902-6) vibrates with sunlight. Odilon Redon's The Spider (1902), an insect with an impassive human face, lurches out at the viewer like a drunk from a doorway.

In the mid-20th century, Americans begin to appear in the chronicle. There are several drawings by Jackson Pollock, a chaste grid by Agnes Martin, two commanding bird profiles of Robert Motherwell's, and an aerial-view abstraction by Richard Diebenkorn.

Eugene V. Thaw was born in Washington Heights, Manhattan, in 1927; he was named after Eugene V. Debs, the famous American socialist. After graduating from St. John's College in Annapolis, Maryland, Thaw set up a gallery in the Algonquin Hotel in 1950 with a loan from his father. In 1954 he married his wife Clare, who suggested that they keep some art for their own personal use. Eventually, Thaw amassed several collections, including Native American art, bronzes from the Eurasian steppes, and medieval European ornaments. All of these works were donated to public institutions, including Thaw's trove of over 400 drawings, which was recently gifted to the Morgan Library—and considered the most significant addition to the library in its 94-year history. Thaw died on January 3, at the age of 90.

"Drawn to Greatness: Master Drawings from the Thaw Collection" will be on view February 3-April 22 at the Clark Institute in Williamstown, Massachusetts. (413) 458-2303.


Learn more about art exhibits and events in the Hudson Valley area.