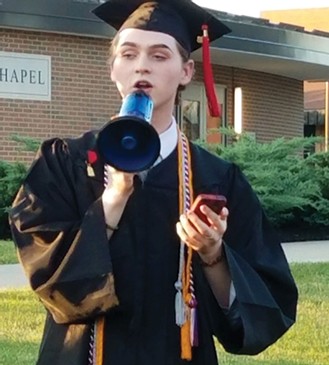 From mysterious illness to mysterious tree deaths, here are nine strange news stories from the past month.

A gender-nonconforming valedictorian was not allowed to give a speech at their high school graduation. The Catholic school in Kentucky, Holy Cross High School, claimed Christian Bales's speech did not align with the institution's values and that there was no time for revision before the ceremony. The school's decision came as a shock: "I did not think the speech was polarizing at all," Bales said. Nevertheless, he delivered the empowering message via bullhorn, with peers and family members gathered around him, right after the ceremony. The speech did not mention Bales's gender or sexual identification. He emphasized that "the young people would win" and encouraged his peers to speak out for their beliefs.

A Hudson Valley couple died of carbon monoxide poisoning after accidentally leaving their car running in the garage. Cornelius Dennis, 86, and Joan Dennis, 85, were found dead in their Croton-on-Hudson home on May 26. This fatal mishap is surprisingly common, and keyless-ignition cars are to blame. Although no official records are kept of the phenomena, it's estimated that since 2006 over two dozen people have died nationwide from carbon monoxide after leaving a keyless-ignition car running by accident. Dozens more have suffered severe injury or brain damage. While some car companies have safety features to alert drivers when the car is still running, others are being called upon to implement stricter regulations.

Nowadays, you can pay for almost anything with single tap on your smart device. Our friends across the pond are taking virtual payment to the next level. Street performers in London can now accept donations from passersby through card readers. While efforts to go cashless are still in trial, soon buskers in all of London's boroughs can say goodbye to their boxes of loose change. The organization Busk in London teamed up with card reader company iZettle for the project. It's said to be a world first.

Public companies are releasing CEO-to-worker pay ratios under the Dodd-Frank Act for the very first time. The law, which requires companies to disclose the median-paid workers' compensation compared to the CEOs, was passed in 2010 and finalized in 2015. After President Trump's election, some thought the regulation would be repealed. It was not. Now the Dodd-Frank Act reports are rolling out and reveal huge pay gaps between executives and workers. Companies with particularly high ratios, like Honeywell with 333-to-1, are bracing for employer and public blowback.

Female garment workers for Gap and H&M experience daily abuse, according to recent reports by Global Labor Justice. Over 540 factory workers in Bangladesh, Cambodia, India, Indonesia, and Sri Lanka have described physical and sexual abuse, threats, and harassment. The report suggests that this gender-based violence is due to pressure for quick turnarounds and low overhead at the clothing supply chains. Gap and H&M said they'll work with the International Labor Organization to investigate the allegations and tackle workplace abuse.

US diplomats were evacuated from Guangzhou, China after some came down with a mysterious illness. They showed symptoms of headaches and nausea after experiencing abnormal sound and pressure. Embassy workers in Havana, Cuba recently had strikingly similar, unexplained symptoms. In 2016, 24 US diplomats in Havana reported odd noises, nausea, headaches, hearing loss, and other symptoms. There are several theories about what's happening here, including suspicion of China, Cuba, or Russia planning attacks, but no official cause has been detected.

If you think local newspapers no longer serve a purpose, think again. A recent study found that when local newspapers close, the cost of government rises. Notre Dame's Mendoza College of Business conducted surveys of about 1,600 newspapers nationwide and found a direct correlation between local newspaper publication and government efficiency. In one case, the report (titled Financing Dies in Darkness? The Impact of Newspaper Closures on Public Finance) compares tax dollar spending before and after Denver's Rocky Mountain News closed in 2009. Local government spending increased significantly after the presses stopped rolling.

Scientists are stumped by the mysterious deaths of ancient trees in southern Africa. In the past 12 years, most of the oldest baobab trees in Zimbabwe, Namibia, South Africa, Botswana, and Zambia have died. Others are losing branches and dying. You may recognize the baobab tree for its large, bloated stem. These trees normally live for thousands of years. Researchers say the loss of the baobabs is "an event of an unprecedented magnitude." They suspect climate change is behind it, but there is no substantial evidence to prove the cause.

A house fire in Marlboro led police to a large weed-growing operation and over 300 pounds of marijuana. On June 6, local police and fire departments responded to the fire at 212 Bingham Lane. Inside, they found a marijuana-growing operation complete with ventilation systems, electrical ballasts, fertilizer, grow lights, and counter-surveillance equipment. This launched an investigation that uncovered two other growing operations on the same block, plus others in Newburgh and Lloyd. All in all, police found about 325 pounds of weed worth $800,000 in street value in what they believe is a large-scale drug-trafficking operation in the Hudson Valley. Joseph I. Arredondo-Alarcon, 34, of 216 Bingham Lane was arrested in the case on June 7.